Guy Martin, his bosses and his bike 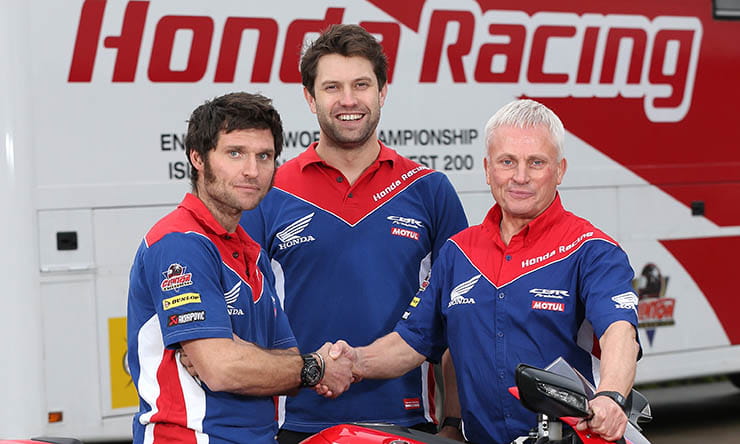 In 1954 Soichiro Honda made a declaration that he would compete in the Isle of Man TT Races.

He said: “I announce my determination, and pledge with you that I will put my entire heart and soul, and turn all my creativity and skills to the task of entering the TT Races and winning them.”

That declaration has been fulfilled, year-on-year, since the Japanese marque made its mark on the island in 1959.

And this week’s massive announcement - that Honda has signed Guy Martin for the TT - has a similar gravitas to it.

Along with fellow Honda rider and 23-times TT winner John McGuinness, the duo will no doubt prove a formidable threat to fellow top-fielders.

But that’s not only what gives Honda’s 2017 gravitas.

This year Honda Racing will also be celebrating a brand-new Fireblade and a brand new boss, Jonny Twelvetrees, who will the replace long-standing head of Honda Racing (and former TT racer) Neil Tuxworth (both pictured above, with Martin).

Despite nearing retirement, it was Tuxworth who facilitated the deal with Martin. He said: “I’ve been going round to his house for dinner and he’s been to mine for dinner over the past three months.

And perhaps even quicker, now he’s on the new Fireblade with full Honda backing.

“I’ve been working as a race mechanic for 27 years and over that time have worked with most of the top riders in the TT paddock. I worked on Guy’s bikes in 2010, the year Closer to the Edge was filmed. And I can honestly say that Guy was one of the most interesting and professional riders to work with and have said for years that on a Honda with the right crew he is a big threat. He has that right now.” 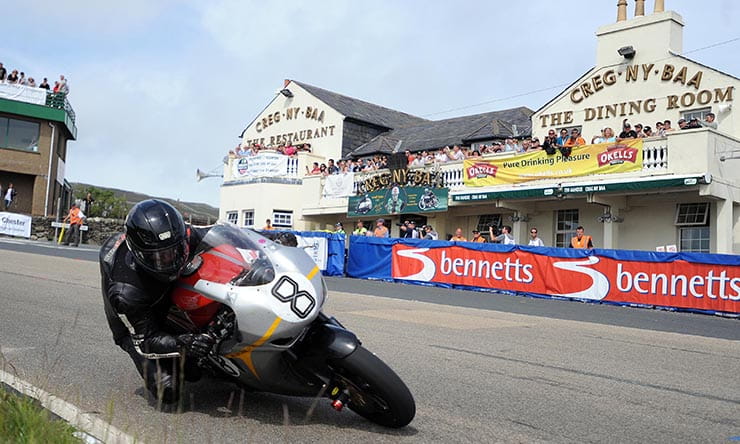 But there’s also a feeling that Guy will have to focus and knuckle-down.

Charlie Lambert has enjoyed a panoramic perspective of TT racing since he started commentating for Manx Radio in 2004. Speaking of Martin’s deal with Honda he said: “Guy has done a lot for the TT - more than he’s recognised for - but what he has to be careful of now is coming back and being an ‘also ran’. He will have to go to the Isle of Man and concentrate on his racing. A lot will depend on himself and his motivation but this could be the making of him. The rest of it is down to him and down to luck. Guy has never had such luck - he hasn’t had the leaders breakdown ahead of him, for example.”

And while this is a comeback, it’s not as dramatic as those in the past.

Lambert continued “This isn’t in the same league as Mike Hailwood’s comeback in 1978 (when he had been out of the saddle for 11 years, Ed) but it is interesting and great for the TT.”

As for the machine itself, this has been a long time coming and a welcome injection of energy not just for Honda but for the industry as a whole. After all, this is a production road bike - one that’s also won 23 Isle of Man TT races.

The new CBR1000RR Fireblade SP2 is built on the same philosophy as its TT-winning predecessors, with power-to-weight-ratio central to its design, yet the new Fireblade is still significantly different than its outgoing models.

For starters, it’s a hell of a lot lighter - 15kg in road trim, to be precise. And it’s also a lot more intelligent, with a state-of-the-art electronic control system, which measures the machine’s activity and works - among other things - the torque system, the rear wheel traction ad ABS braking.

Twelvetrees said: “This machine shares the same concept as the other Fireblades in that it is the ultimate road bike but the 2017 model takes this to the next level.”

“They were crawling all over the bikes in the workshop,” said Twelvetrees. “They both had broadening smiles as the day went on and it was great to see them grinning so much. John is especially happy with it.”

Honda’s dominance at the TT does not need reiterating. Many believe that it is the manufacturer to master the world’s most challenging 37 and three quarter miles of road.

Wilson Craig of Wilson Craig Racing said: “I’ve been doing this for a long time and actually bought Guy a Honda to race at the TT in 2009 (pictured above). Hondas are the best bikes around the TT and I’m glad to see Guy on a Honda, I wish him all the best. Guy and a new Honda Fireblade will be the ultimate package.”

The bigger package, of course, is the whole team: Martin, McGuinness, a new boss and a new Fireblade.

Soichiro Honda’s pledge is still going strong, 63 years after it was made.