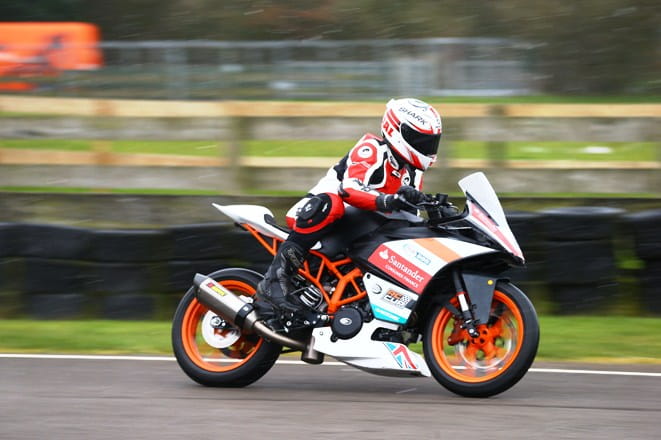 Let’s face facts; we all like riding motorcycles because they’re interesting, they serve many purposes and, above all, they make us happy.

Then there’s racing which keeps us on the edge of our sofa/grandstand seat/sanity or constantly refreshing our chosen social media outlet for race results and up-to-date lap times.

The evidence has already poked its head up for the world to see this season. The opening round of the Superbike World Championship exceeded expectations last weekend in Philip Island, with a Leon Haslam win by just 0.01 seconds. Then there’s MotoGP testing in Malaysia this week where 14 riders were covered by just one second in what should prove to be the closest season yet.

Exciting racing with so many British riders leading the charge builds interest especially among youngsters and/or their ‘Competitive Dad’s’. Let’s suppose you or your young racer has been through the Aprilia Superteens series and you are looking for the next step. A Moto3 ride even in the UK is going cost upwards of £40,000 and there’s no guarantee the bike will be good enough for the sharp end of the grid, regardless of the riders’ talent.

Cue KTM and MSVR, the controlling body behind British Superbikes, who recognised the need for a competitive and cost-effective one-make series. So, ‘The Santander Consumer Finance KTM British Junior Cup’ was born and replaces the outgoing Triumph Triple Challenge support series for 2015, meaning that it benefits from TV coverage too.

The series is open to 13-18 year olds who will ride identical KTM RC390 Cup bikes, based heavily on the road bike we tested last year, with a handful of performance enhancing and weight-saving changes. Importantly, the bike plus VAT and series entry fees comes in at less than £10,000 with an added incentive of an invitation to the 2016 Red Bull MotoGP Rookies Cup selection event for the two best riders. 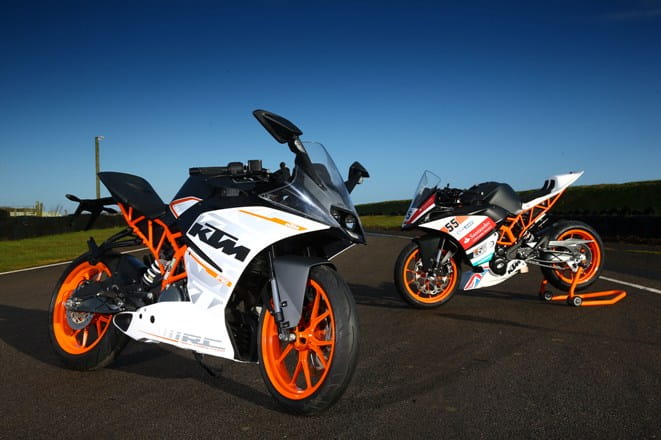 So what's different between the road bike and the race bike? Approximately 9kg is saved from the standard road bike with:

We were invited along to the press launch of the RC390Cup bike at Shenington go-kart circuit in Oxfordshire.

The single-cylinder, 4-stroke, 375cc engine sounded glorious echoing off the banked spectator areas around the track but the tight and twisty track was to prove quite a challenge for the teenager’s race bike.

2nd, 3rd and 4th gears were all that were required to handle the 38bhp ‘scamp’ (restricted from the road version’s 44bhp) and within 10 seconds of leaving pit lane I wished I was 13 again. Never mind the poor surface of the slippery go-kart circuit, I wanted to see how this bike would handle Paddock Hill Bend, Craner Curves or The Mountain. Unfortunately, after just three rather skittish laps on a freezing and damp track, the snow came which was made even worse by my choice of a dark visor. And that put the dampeners (quite literally) on any vigorous or extensive testing. 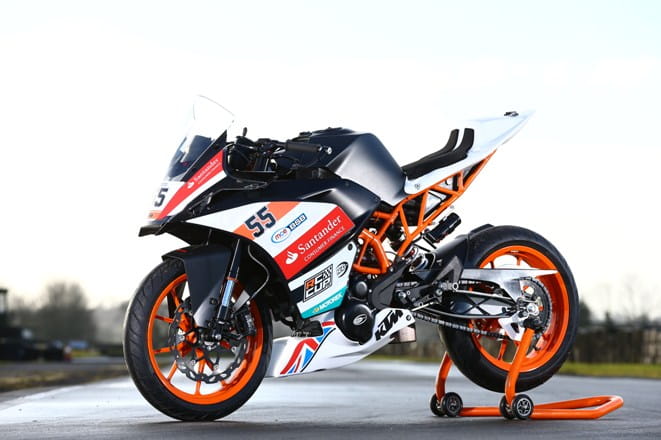 From what I could tell, the stopping power from the front, four-piston, radially bolted caliper was thankfully very good, even in those conditions and without ABS. The chassis is light, nimble and narrow, almost toy-like with its precision. Considering I look like a giant on the bike, there is plenty of room on board to move around, in fact some of the slight, young teens also frequenting the media launch ought to be prescribed a diet of spinach and Weetabix for the coming months.

Power delivery is smooth and the gearbox is slick enough although being a single-cylinder, 4-stroke you quickly through the gears and by the first corner I soon realised there’s plenty of engine braking and no slipper clutch!

The fully adjustable WP suspension is bespoke to the race bike. The front forks offer rebound, compression and preload while the rear monoshock also caters for the demands of circuit racing. The bike we rode was straight out of the crate a little soft for my liking.

Metzeler Sportec M7RR’s are the one-and-only tyre option for the season come rain or shine…or snow for that matter. Witnessing those fortunate to run the bike on a dry circuit, they certainly looked capable of coping with open hairpins at precarious lean angles.

Despite my considerable height/weight disadvantage I’m seriously considering shaving and doctoring the date of birth on my driving licence. 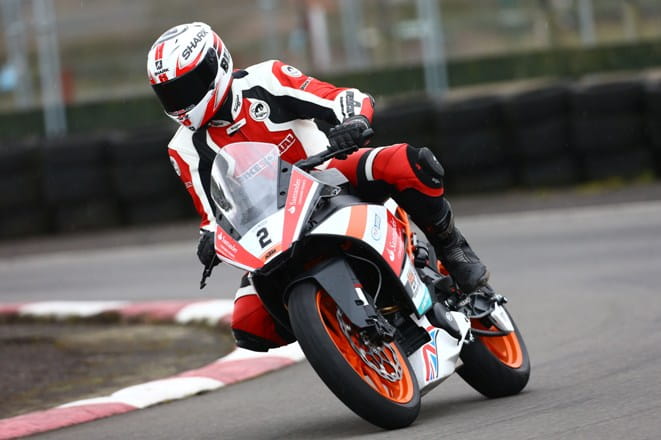 We spoke to two young lads who’ve signed up already. Meet Thomas Strudwick and James Hobson who only hoped on the bikes for the first time today.

Thomas, 13, from Littlehampton is the reigning British MiniGP70 Champion:

“I rode a KTM motocross bike from the age of 5 but moved onto MiniMoto then MiniGP and then won the British MiniGP 70 Championship. I heard about the KTM RC390Cup through the paddock and decided to apply because it’s a natural next step towards the Red Bull Rookies or Spanish championship to then get into the Moto3 paddock, that’s the aim.”

“The bike is more powerful than anything I’ve ever ridden and it’s taller which will be a bit of a challenge. I’ve never ridden a production bike or a four stroke so I think there’s a lot to learn about engine braking.”

James, 18, from Barnsley finished 4th in the Moto3 British MotoStar Championship in 2014:

“I started a bit late at 12 when I got into MiniMoto then went through MiniGP Metrakit and Superteens. I’ve been on a Moto3 bike in 2012 and 13 then on a KTM in 2014 in the BSB series.

It’s good value for money with good track time in a level playing field. Everyone’s going to have the same bike, everything is sealed. The only thing that differs is the height and weight of the riders. This season we’re going to enjoy the racing and hope to gain confidence. We’ll be looking forward to this and having some fun. If you’re not having fun there’s no point! I like Thruxton and Donington with their fast, technical corners. The power delivery is smooth, not snatchy at all. Once we get it set-up it’ll be a really nice bike. It’s quite tall for a little lad like me being based on a road bike!” 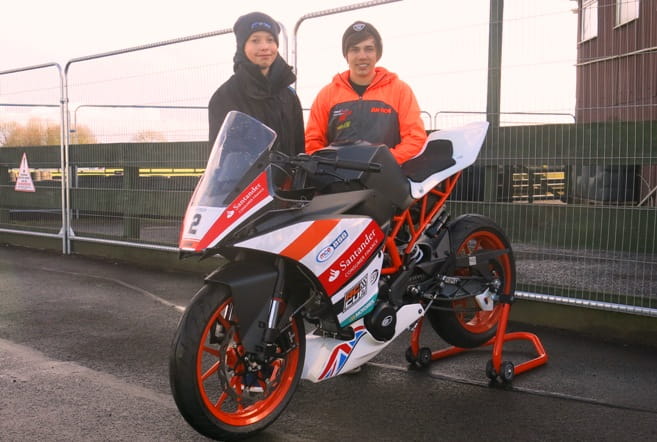 15 entries have been received so far and organisers are expecting at least another five by the time the first round comes at Donington Park over Easter weekend. Mark our words, this will be a series to watch. Testosterone-fuelled teenagers on matching machinery hurtling into Redgate will just be the start of what is certain to be a thrilling season and who knows, in five years from now these could be doing battle with M.Marquez & co. KTM must be applauded for providing excellent equipment for an affordable series to encourage racing development.

If you're interested in signing up then visit either the official KTM website or the British Superbike site.

Do you know anyone who's entered? Who are the stars of the future?  or