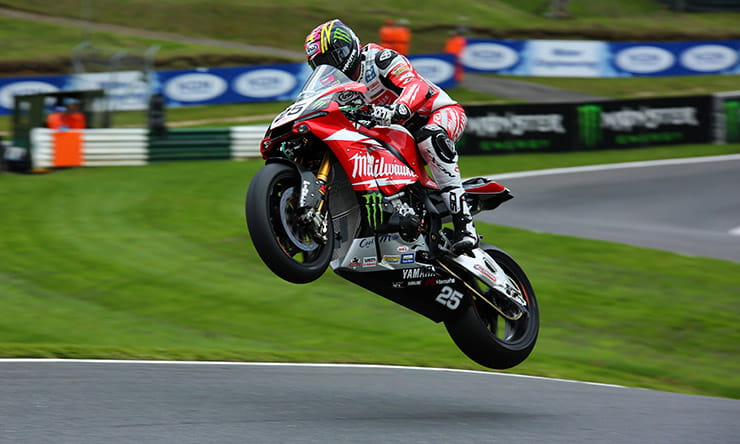 It’s every Cadwell Park track day rider’s dream, leaping off the Mountain asphalt to impress onlooking family and friends, and collecting a memento from the photographer to cherish forever.

We’ve all seen the domestic greats fly over the mountain, riders such as Josh Brookes (pictured above), Jonathan Rea, Shane ‘Shakey’ Byrne and the late Karl Harris. It certainly is a unique and fine art within motorcycle racing, and when it is executed well, can send a shiver down your spine.

If you struggle to jump the Mountain on your track day bike, Bike Social is about to give you an insight into leaping the crest like a British Superbike Championship contender, courtesy of the JG Speedfit Kawasaki trio of Messrs Hickman, Ellison and Haslam…

"I don't jump particularly high,” says Peter Hickman, who lives in nearby Louth. “It's all about keeping up momentum more than anything. At the bottom you have to keep the throttle on and keep it going, you want to be over on the left hand side of the track, because there is actually less of a jump on that side than there is on the right.

“If you can keep your speed up at the bottom of the Mountain, jump from the middle to the left because the track is trying to pull you to the right slightly, so as you land you're already in the right spot for Hall Bends.” 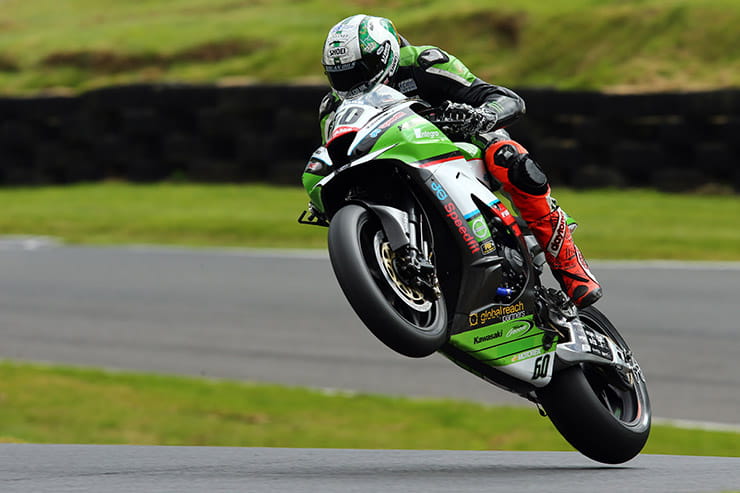 Opened in 1934, Cadwell has always posed a challenge to every rider that has taken to the Lincolnshire track, including the ‘Mountain’ and the ultra tight ‘Woodland’ section.

Although the dramatic ‘big air’ is great for photos and TV, and helps draw a big crowd to a circuit not known for its modern facilities, Hickman’s team mate, James Ellison, added that there are a few different ways of making the jump, and a faster one to boot.

"There are two different ways,” said the Cumbrian, pictured below. “If you drive hard you obviously run to the outside of the top of the hill and then you have a big risk of landing sideways, that is where you have the big accidents.

The lesser the jump, the faster the lap time is Ellison’s mantra, however one man made the longer jump work in his favour, current British Superbike Champion and World Superbike rider, not to mention motocross fiend, Josh Brookes. “The more time you are in the air, the more time you lose, unless you jump it like Brookesy,” adds Ellison. “There are two little humps, if you can clear the first one and land on the second one but that’s a huge risk.

“I try to keep the wheels on the deck, take off a tiny little bit, get back on the gas and you are going to drive faster on the ground than you are in the air. That's the way I normally do it and it seems to work. “I roll a little bit at the top because if you keep it open it wheelie's too much so you roll it to get the front end to come down. If you look at Josh, he pins it then shuts the throttle to get the nose to dive so he can clear it and land, because he has the gas on right to the top of the hill.” 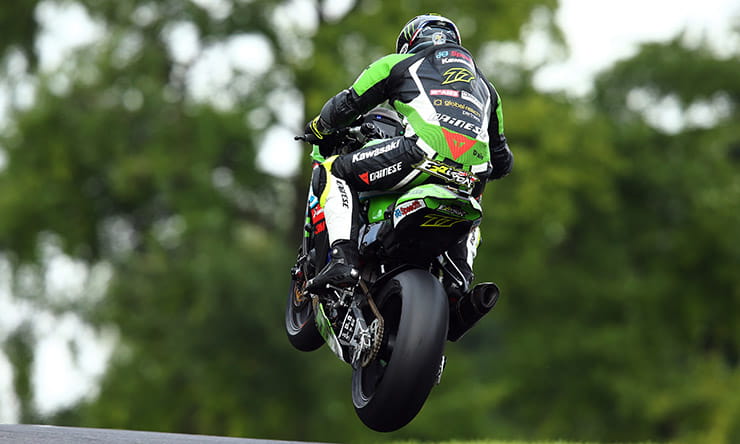 Leon Haslam is the current lap record holder, dating back to his time on board the 2007 Airwaves GSE Racing Ducati.

"Giving a lot of lean angle as you take off sometimes stops the jump, if you lift the bike upright then it creates a really big jump. For me I’m always trying to keep the wheels on the floor as much as possible to get that drive into Hall Bends.

"I still hold the lap record, and the Mountain section was my fastest but I was never a real big jumper of the mountain, I try to keep the wheels on the floor as fast as I could.”

However, with an advancement in machinery and the lack of electronics compared to 2007, when Haslam (right) blew away the opposition, he still believes his way could be the fastest, adding: "I'm definitely the fastest in that last sector, so I think what I was doing back in the day was the quickest way. Everything has moved on now with electronics and the bikes so we'll have to wait and see.

“If you can get that landing on the back wheel and the drive then that's the perfect way of maximising it, but you have to take into consideration how much time you are in the air and how much time is wasted there. "I haven't been to Cadwell since 2008, and it’s a unique circuit but with my past record there, I'm really looking forward to getting back.”

The Cadwell Park round of the 2016 British Superbike Championship takes place this Bank Holiday weekend, with qualifying on Sunday and race day on Monday.