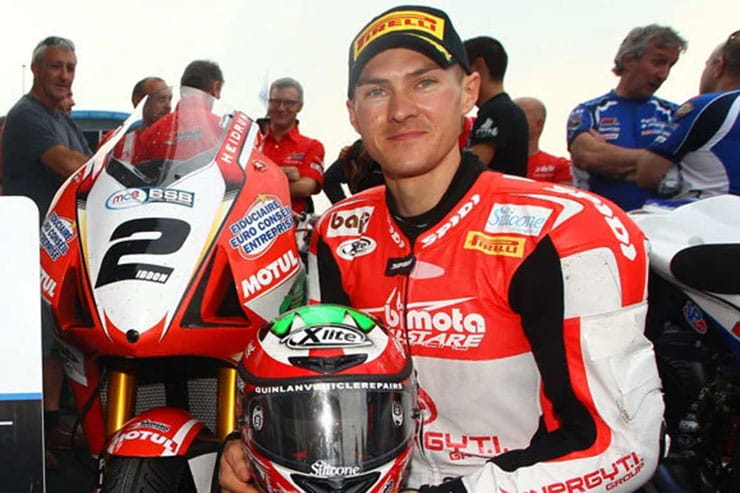 A figure so familiar with the Bennetts British Superbike Championship (BSB) he has become part furniture, it's easy to forget Christian Iddon was at one time counted among the invasion of British riders competing in WorldSBK.

An influx of riders so extensive it was difficult to see anything other than the Union Jack on the UK dominated entry-list, while numerous Brits have held the flag aloft for more than a decade now, Iddon's brief WorldSBK sojourn isn't so much forgotten, its consigned to footnotes as though it never occurred at all.

The Stockport rider made his WorldSBK debut in 2014 during a brief upsurge in interest that led to a record nine manufacturers being represented on the grid.

Among the fresh entries - together with MV Agusta and Erik Buell Racing - was a curious factory-backed effort from Bimota that proved many wrong with its surprising competitiveness.

One catch though - it wasn't allowed to score points. Worse still, Bimota was then dumped out of the series altogether before the season was over.

It was, as Iddon succinctly remarks, ‘odd'.

"It was a big shame but that was my WorldSBK chance," Iddon told BikeSocial in an exclusive chat, but not before reacting in surprise at the mention of his oft-forgotten campaign as though he too needs a moment to cast his mind back. "It was an amazing experience for me though." 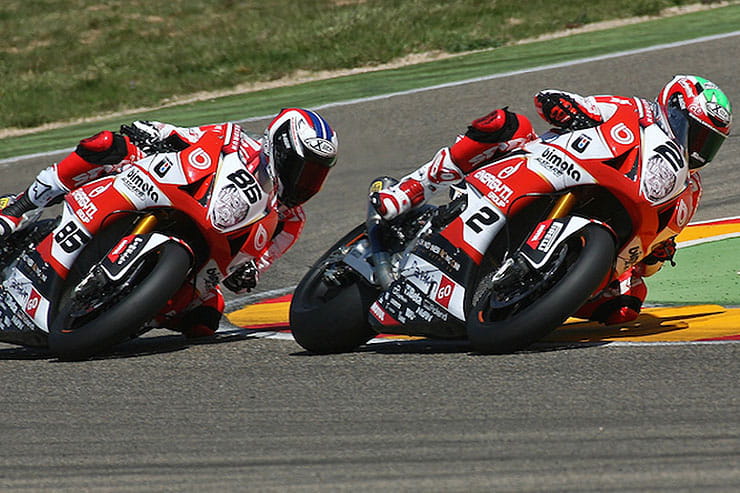 Bimota and the ‘cheat bike'

This was to be Bimota's third stint competing in a series it helped found when it raced with success during the early years of its inauguration in 1988, then again during a short lived but race-winning appearance in 2000 shortly before bankruptcy.

Indeed, Bimota's tumultuous history has been well documented over the years and come 2014 the Rimini firm had been reduced to a small production turnover under ownership of a Swiss investor group with a range topped by its flagship but low-selling sportsbike, the BB3.

In an effort to drum publicity for the iconic but ailing Italian firm, Bimota turned to its motorsport roots to enter a pair of BB3s under new EVO regulations, simplified from WorldSBK to lean more towards the Superstock model in an effort to reduce costs and bolster waning grid numbers.

Despite outside cynicism about the project initially given Bimota's niche status, it did retain one key weapon in its armoury by enticing Belgian outfit Alstare - the set-up behind Suzuki's WorldSBK title tilt in 2005 - to run the programme.

Iddon was hired alongside experienced Italian racer Ayrton Badovini for this curious new challenge, the Briton having turned heads with some eye-catching performances in the WorldSSP class the previous year on the pretty, yet underpowered and unreliable MV Agusta F3.

"I had a really good year with MV but we were underpowered," he continued. "We got an engine upgrade towards the end of the year and in the final three races I broke down in two, got a podium in the other. I was in the top five for the two I broke down in.

"I had a two-year contract, but the following year Yakhnich Motorsport took over the MV factory team, so my contract was null and void. They got an engine upgrade that didn't didn't s**t itself every time it went on track.

"I'm gutted because to me that was a big missed opportunity because that was a good bike, it just needed a few extra ponies just so we didn't get passed down the straight. So the Alstare thing came up, it was a big thing [to compete with that team].

It didn't take long for Bimota's declaration of intent to compete to raise some eyebrows. Indeed, the BB3 skirted close to breaking regulation given it effectively ran a customer engine sourced from the BMW S 1000 RR, a machine that was leaving rivals behind on the speed charts.

After delays in getting the ‘cheat bike' forced Bimota to miss the season opener in Australia, it eventually made its belated and much scrutinised debut in Aragon with expectations in the paddock set to ‘modest' at best.

However, armed with its German ponies, the BB3 proved surprisingly quick out of the box with Badovini ‘scoring' points on its debut. You may notice the inverted commas around ‘scoring', but we'll get to that in a moment…

Iddon was soon making the first of several trips to the top 15 too, despite a motorcycle he recalls as quick but not terribly reliable and littered with idiosyncrasies that he says made it feel like he was riding a different machine lap-to-lap.

"We basically rode a ‘cheating bike', it was a BMW engine with their own chassis, a bit like a MotoGP CRT entry.

"The bike was competitive, but it didn't work. You had to run stock electronics and we had massive issues with the lean angle sensors on it, which were really susceptible when it moved. Wherever the sensor was - we couldn't put it in the same place as BMW - caused massive problems.

"Even though it was the right way up, it never knew what angle it was. The throttle was doing all sorts of stuff that you weren't ready for. You at least want a bike that does the same thing lap-after-lap, but it didn't." 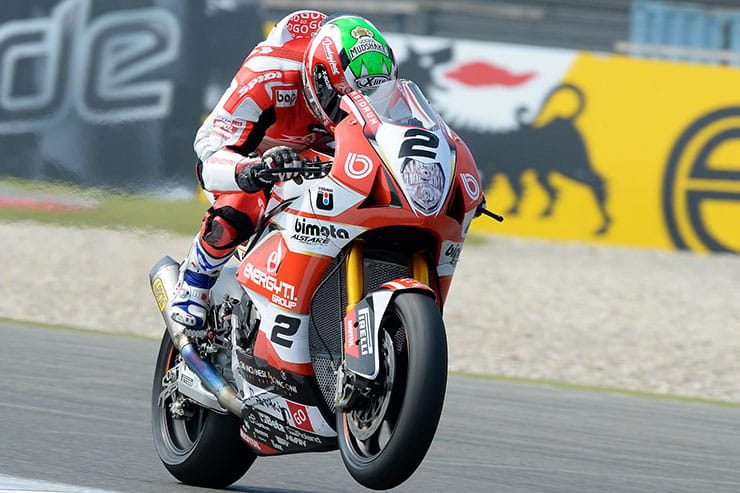 "We stuck it to a lot of good WorldSBK riders"

Nevertheless, for several reasons, his notable results were no mean feat for the now 37-year-old. Indeed, despite the scant progress being made on developing the BB3, his EVO-spec bike had the measure of several rivals with ‘full fat' machinery.

"We couldn't always be competitive because we weren't always on a WorldSBK but you were on this EVO bike, but we stuck it to a lot of good riders.

"The BMW one was pretty factory, so was Kawasaki. At Assen it was damp and we were right up there. I remember I had just passed Marco Melandri on the factory Aprilia and was chasing Chaz Davies on a factory BMW… then I lost the front and the bike ended up over the fence.

"I think it was more excitement than anything else, but we were handing it to them."

However, as well as being a ‘cheat bike', the Bimota BB3 was also a ‘ghost bike' after WorldSBK officials allowed it to compete on the unusual stipulation it was not eligible to score points yet.

The reason for the decision was Bimota's failure to meet homologation quotas, the cornerstone of WorldSBK's ethos as a production-based series. And herein lies an issue that wouldn't just go away but raises questions as to why the firm was allowed to compete in the first place.

Prior to the 2014 WorldSBK season, manufacturers entering WorldSBK were obliged to do so with a roadgoing motorcycle that had met a minimum production run of at least 1,000 units, the reasoning being it prevented bigger budget brands creating a limited run ‘homologation special' thinly veiled as a roadgoing model.

However, this quota was reduced to just 125 units for Bimota to smooth its way onto the grid but was ruled it had to have met this within four months and couldn't score points until it was. It then required to reach 250 units by the end of the year and 1000 by the end of 2015.

Bimota made the grid as planned at Aragon but wherever Iddon and Badovini finished at the flag, they'd be removed from the classification,

Iddon kept tabs on the production processes back in Italy, but it was clear early on that not only was Bimota on course to miss its deadline for meeting criteria, it wasn't even getting close.

"I knew we weren't in the results anyway, so wherever we finished we didn't finish there. It is a shame, but you don't care at the time, you race whoever is there.

"WorldSBK kept reducing it but there were probably only 10 or so bikes produced [Ed: 30 BB3s were produced and delivered], so it was never going to happen and in the end they had to do something about us." 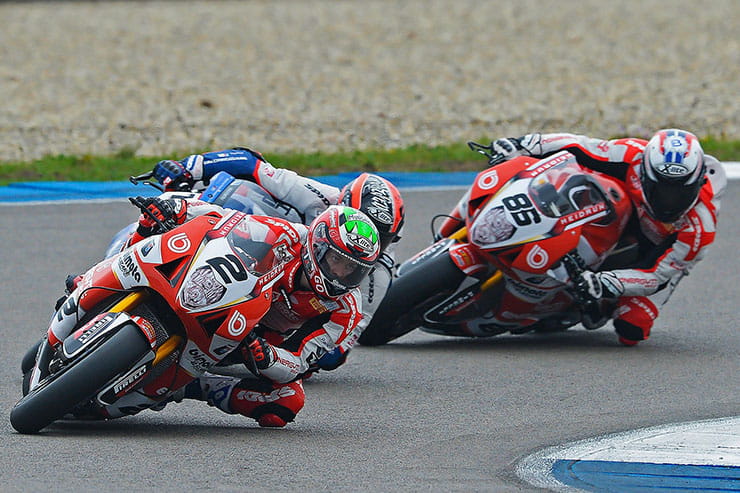 End of the road for Bimota and Iddon

That ‘something' was a firm hand from WorldSBK officials sticking to their guns and throwing Bimota, Alstare, Badovini and Iddon - fresh from a season's best ninth place finish at Laguna Seca - out of the championship altogether.

Though he looks back at the experience fondly, Iddon admits he was frustrated at its abrupt conclusion, adding WorldSBK should have foreseen Bimota's inability to meet criteria and either given it dispensation or prevent it from starting altogether.

"It was a big shame because I didn't get to finish the season but I don't think the project was destined to go anywhere because Bimota wouldn't ever reach that capacity.

"Regulators should have either accepted they won't make many bikes and allow them in for fun or just keep them out from the start."

He also believes the curtailed campaign - which spanned just eight rounds in the end - meant his absence during the final events scuppered his chances of landing another WorldSBK seat for 2015.

"I think it was a problem that I didn't finish the season because once you're out for a round you are as good as gone. So if I turned up at the last round and team managers hadn't finalised their teams, I'd have stood a better chance."

It means all that is left of Iddon and Bimota's WorldSBK endeavour is rather soberingly being rooted to the foot of the 2014 championship table with a series of big black ‘EXL.' markers stretching past his name.

It wasn't all bad though, Bimota being permitted to compete - for points - in the 2014 British Superbike Championship with current WorldSBK racer Christophe Ponsson, albeit with modest success.

However, the motorcycle's potential was demonstrated by Iddon during a wild-card outing at Assen, where he subsequently stuck the - he admits, not entirely specification eligible - BB3 on pole position and went on to achieve a top five race result.

While his WorldSBK endeavour was brief and not entirely sweet, Iddon's career gathered momentum thereafter with a return to BSB in 2015 with Bennetts Suzuki before switching to Tyco Suzuki for 2016. He'd go on to enjoy his best seasons with Paul Bird Motorsport and its Ducati in two Title Showdown campaigns in 2020 and 2021.

For 2022, Iddon switches to the Hawk Racing Buildbase Suzuki outfit, where he can at least reminisce about that 2014 season with incoming WorldSBK rivals Leon Haslam and Tom Sykes… even if - in the official eyes of WorldSBK at least - it never really happened…

"It was an amazing experience for me."