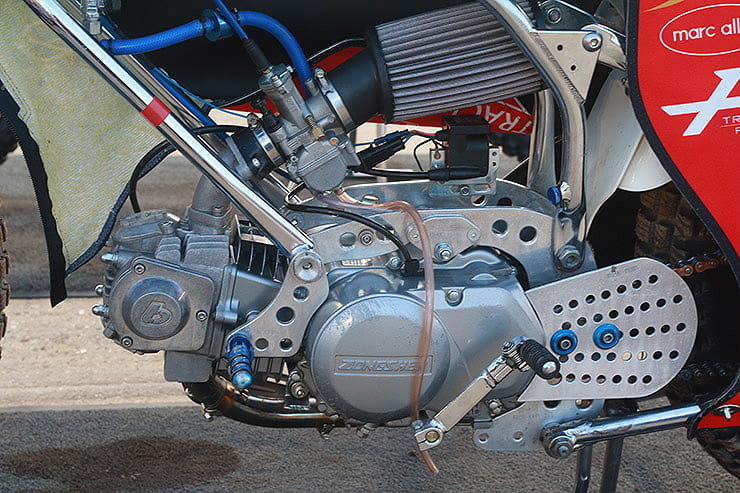 No brakes, one gear, a maximum weight of 77kg, a tailor-made 500cc single-cylinder 24bhp engine that runs on methanol, with a 0-60mph time that would embarrass a Formula One car. Oh, and they only turn left. Welcome to Speedway - a sport that, in Poland, is even more popular than football. It’s two wheels, an engine with pilots in helmets yet the motorcycling fraternity seems decidedly split from this high speed, adrenaline-packed pastime. Folk have been racing each other automotively for one hundred years and even though vehicles have evolved, the impact of competition remains a strong pull for competitors and spectators alike.

If you’ve never been before there’s a strong chance that between March and October, when the Speedway season is in full swing, one of the 26 teams across the U.K. will be racing near you, and an even stronger chance you’ll have a cracking night out should you decide to fork out the £18 for a ticket. Here’s a little break down of what to expect and how to enjoy it. 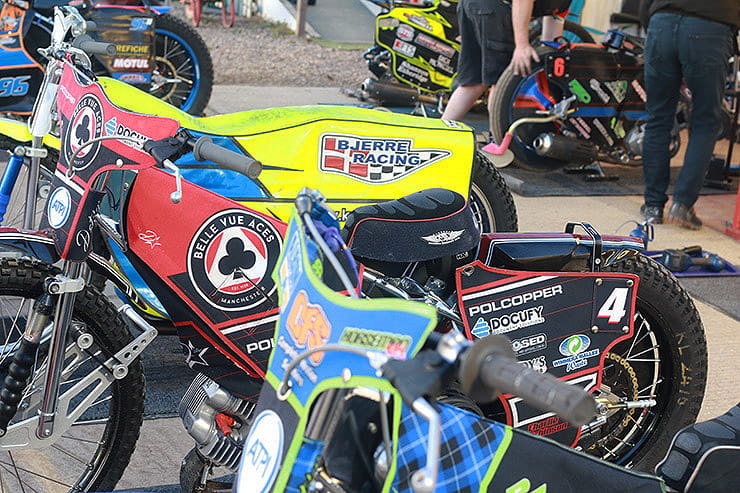 Those 26 teams are spread across three leagues with seven in the Premiership, 11 in the Championship and eight in the National League. The teams race each other in the league twice at home and twice away, with seven riders per team per event competing over 15 heats at each fixture, with each heat taking place over four laps. Four riders compete, two from each team.

Points are awarded per race from 3-2-1-0 depending on the finishing positions of each of the four riders, all of which are accumulated per team for an overall score at the end of the night. An overall home win for the team earns three points, a draw is one and a loss is 0. An away win earns three points too but if the win is by seven points or more, then four league points is the reward. Equally an away draw gets you two points, and if you lose by less than six points then you receive one league point. Got it? 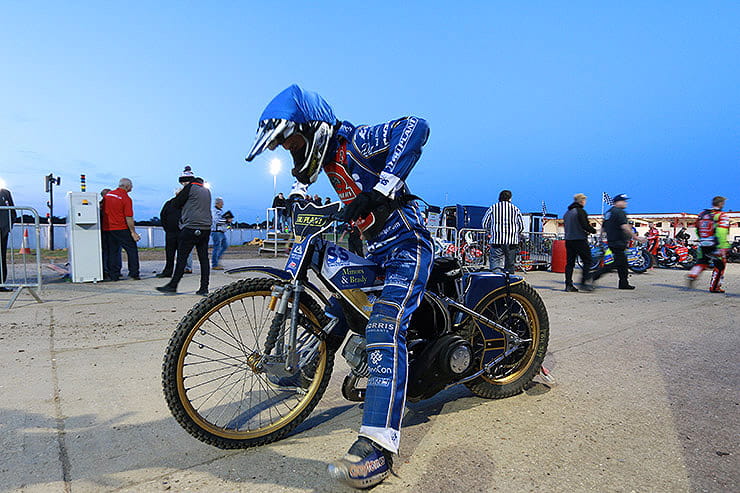 Racing begins at 7.30pm although at each meeting a parade takes place beforehand when all riders from each team will be introduced to the crowds, usually on the back of a flatbed lorry and then again for one lap on their bikes ahead of Heat One.

A halftime break of around 15-20 minutes is included so there’s plenty of time to stock up on refreshments.

The two home riders per heat will wear the red and blue helmet colours while then away riders wear white and yellow making them easy to spot as they thrash around for four laps of a 300m oval. Each heat is over and done within 60-seconds so keep your eyes peeled for some speedy sideways action. 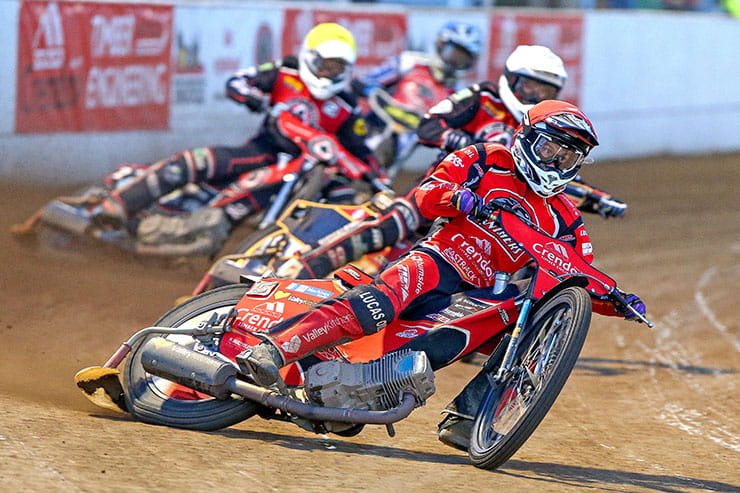 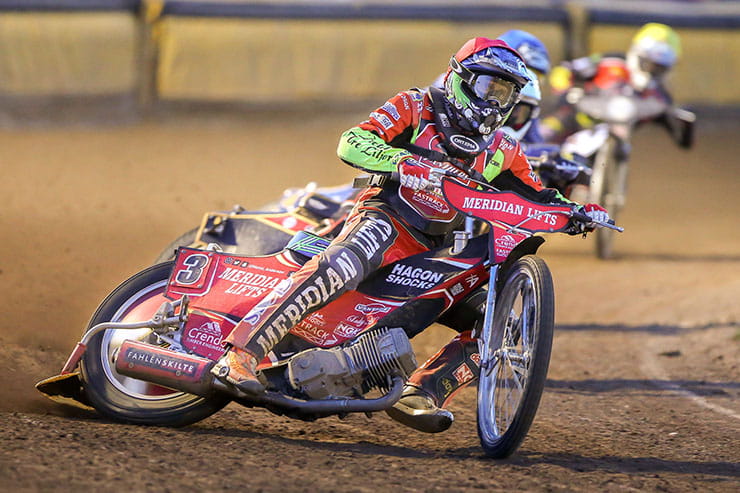 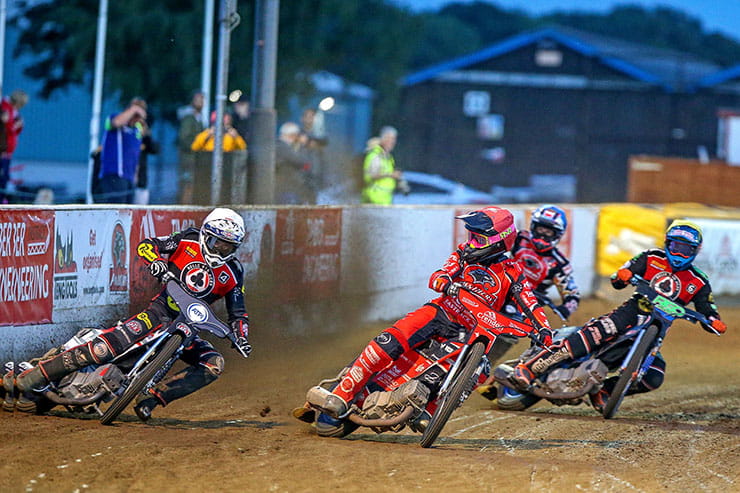 We popped down to the East of England Arena for a Peterborough Panthers fixture vs. Belle Vue Aces and the home team’s Manager, Carl Johnson, spoke about rear tyres, “One tyre will last all meeting, we can use just one tyre per bike per meeting so we get an allocation of seven tyres and that should last four or five races. But if the track surface is hard like it is today, you might burn a tyre out in three races in which case you might need to borrow somebody else’s.”

And why do the riders spin the rear wheel? “If the tyre is on the deck and you see smoke then the rider is trying to heat the tyre, whereas if they’ve got it on the stand with the wheel in the air and turning then they’re trying to cool the clutch, because they get really hot, really quickly. Overall, they’re pretty nifty machines,” adds Johnson.

Some of the riders will double up and ride for teams in the middle league as well representing other teams in leagues across Europe with Poland and Sweden as both popular and well-paying destinations. In terms of remuneration, riders receive pounds per point so if they don’t score any points then they don’t get paid.

The Panthers aren’t enjoying the best of seasons with injury-based disruptions to their rider roster in the early part of the season being partially to blame but here on a balmy night in front of around 900 fans (down on the usual 2,000) the riders were seemingly fighting hard. Luck wasn’t always on their side with a mechanical breakdown or two plus the captain, Hans Anderson, successfully attempting to wheelie into the wall out of turn two in heat 12 when the overall scores were tied at 33-33. Thankfully he fared better than the wall and even came back to race in the final heat of the night but by the end of the fixture, it was The Aces who won by 48-42 leaving Peterborough well and truly rooted to the bottom of the Premiership table. 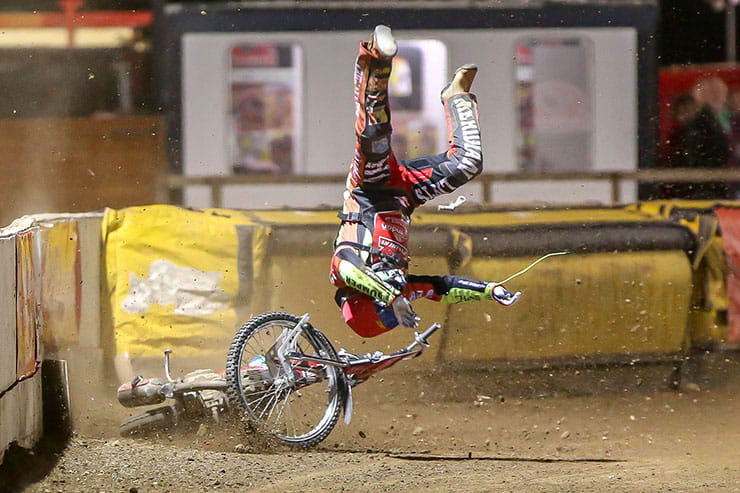 For even more information, head to www.speedwaygb.co.uk and for the Peterborough Panthers, click here http://peterborough-speedway.com/