Throughout the MotoGP era the final race of the season has always been held at Valencia, Spain. And more often than not each race has made compelling viewing – sometimes with even the title itself up for grabs.

But which of these races have been the most memorable? And will this season’s finale live up to those forebears? To whet your appetites and get you in the mood for what may be about to come, here’s our pick of the best 10 (in chronological order)… 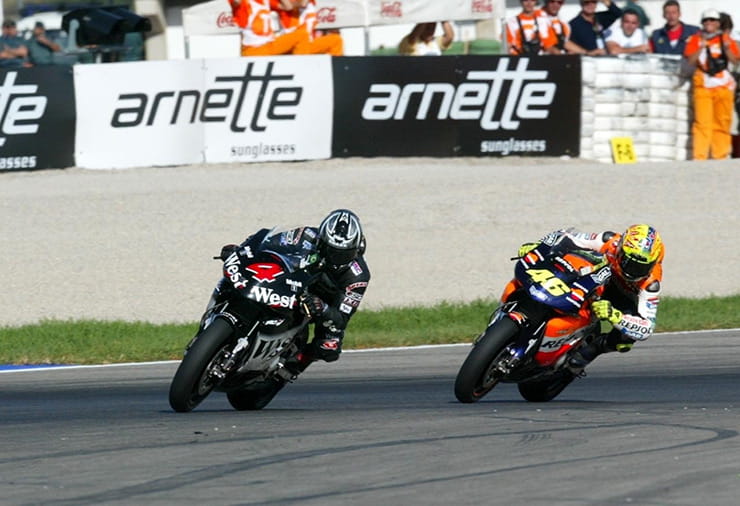 The first year of the four-stroke MotoGP era was also the last of the old, much-loved, two-strokes with the screaming 500s allowed to compete on equal terms during this crossover year against the all-new, 1000cc four-stroke Honda RCV and Yamaha M1. Sadly, though, there was no fairytale ending as the leading Honda four-strokes of Valentino Rossi, Alex Barros plus Yamaha-mounted Max Biaggi made the running right from the first corner. Rossi was chasing Mick Doohan’s record of 12 victories in one season but it wasn’t to be – Barros nicked the win. 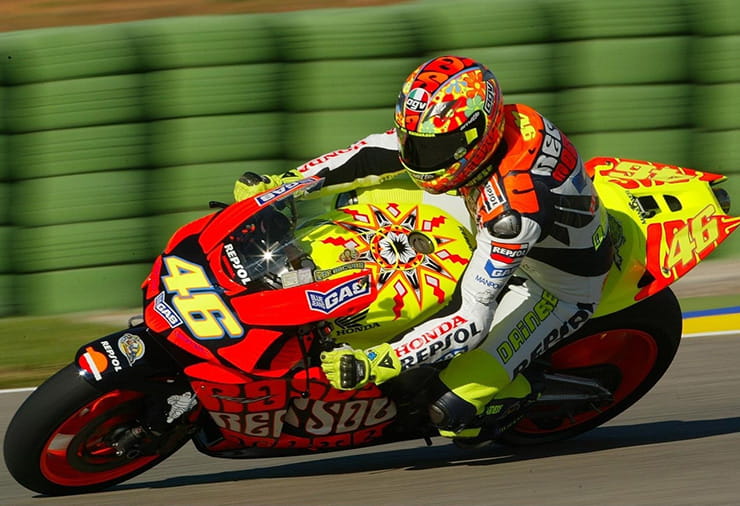 The Italian made his final appearance on an RCV before his dramatic switch to Yamaha for 2004, in style – and then some. Not only did Honda’s reigning world champ score his ninth win of the season at Valencia (and his 22nd straight podium, no less) he left everyone bar local hero and Telefonica Honda rider Sete Gibernau trailing in his wake. What’s more, Rossi’s RCV was painted in one-off, commemorative, Hawaii-style livery by Aldo Drudi. Loris Capirossi on the Ducati Desmosedici rounded out the podium places. 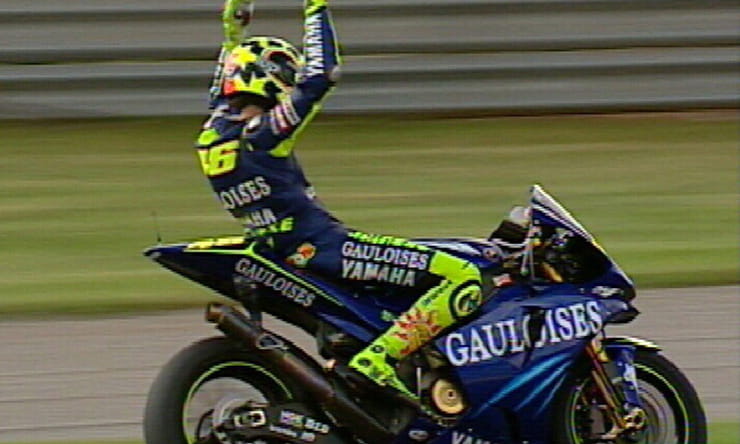 Rossi’s return to Valencia in 2004 was just as dramatic as the year before. Having already confirmed the title, so giving Yamaha its first crown in 12 years with Rossi becoming the first rider since Eddie Lawson to win back-to-back titles on different machinery, Rossi rounded off the season by overcoming a bad start to take his third win in a row and his ninth of the season. Max Biaggi (having replaced Rossi at Honda) and Troy Bayliss (Ducati) completed the podium places. 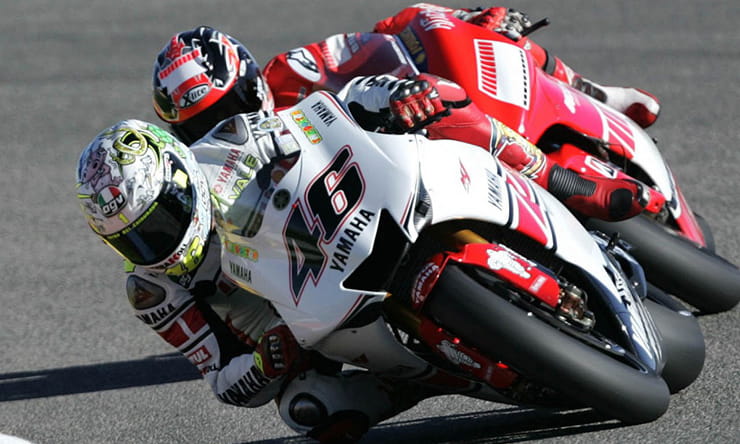 Although Rossi retained the MotoGP championship in dominant style, winning 11 of the 17 rounds, the 2005 Valencia MotoGP wasn’t quite the season finale Yamaha had hoped for to round out it’s 50th anniversary year – but it was still a great sight! The two Yamaha M1s of Rossi and Colin Edwards raced in special ‘retro’ Yamaha white/red livery (echoing the yellow/black Yamaha USA racing colours the pair raced in at the US GP at Laguna Seca in July) yet, like in that race, didn’t quite come up with the result hoped for. After starting from 15th on the grid Rossi powered impressively up to third behind Honda’s Melandri and Hayden. Edwards, meanwhile, was eighth. 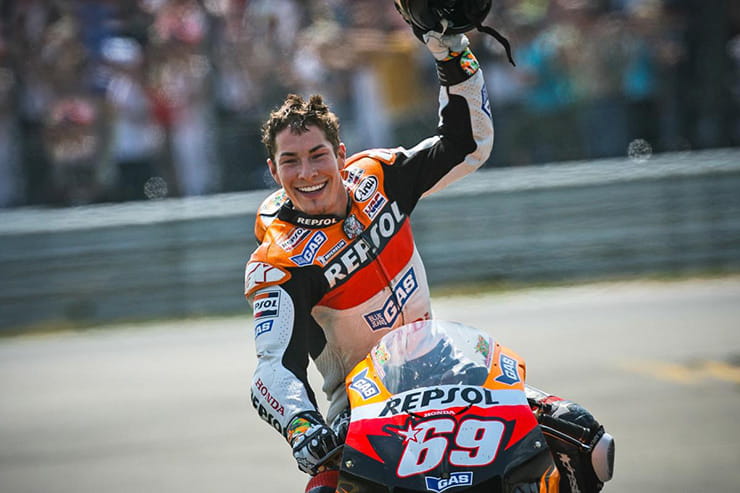 Rossi was due to seal his third successive Yamaha MotoGP crown at Valencia in 2006, leading Honda’s Nicky Hayden going into the final round by six points and sitting on pole – but we all know what happened next. In one of the most dramatic season finales ever. Rossi uncharacteristically low-sided his M1 on lap four and, although remounting, could only finish 13th. Hayden, meanwhile, keeping a close eye on his pit boards, finished a solid third behind the Ducatis of Bayliss and Capirossi enabling him to beat Rossi to the title by five points. 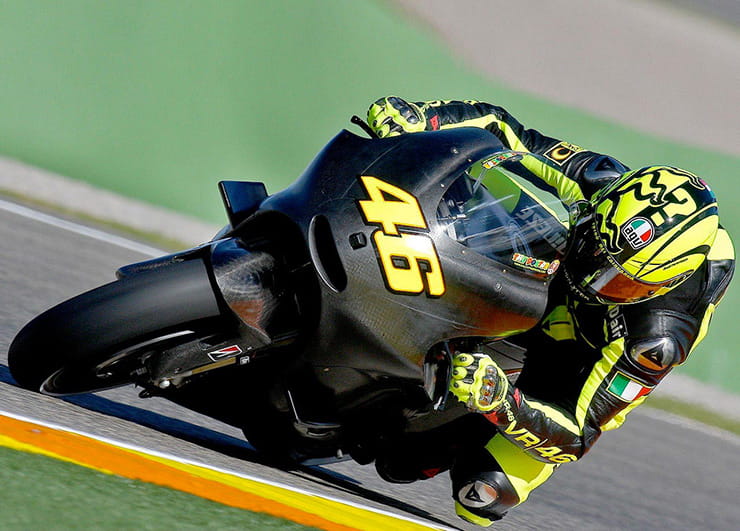 While 2007’s 800cc rule change saw Casey Stoner’s Ducati romp away to the title, Rossi’s Yamaha returned to form in 2008 and again in 2009, which was most notable to the tyre switch to Bridgestone, 2010 saw Rossi usurped by teammate Jorge Lorenzo which led to Rossi sensationally switching to Ducati and one of the most anticipated season finales in years. Two days after the race Rossi made his Ducati testing debut at Valencia. History tells us, of course, it wasn’t a success. But for that brief moment the racing world stood still. 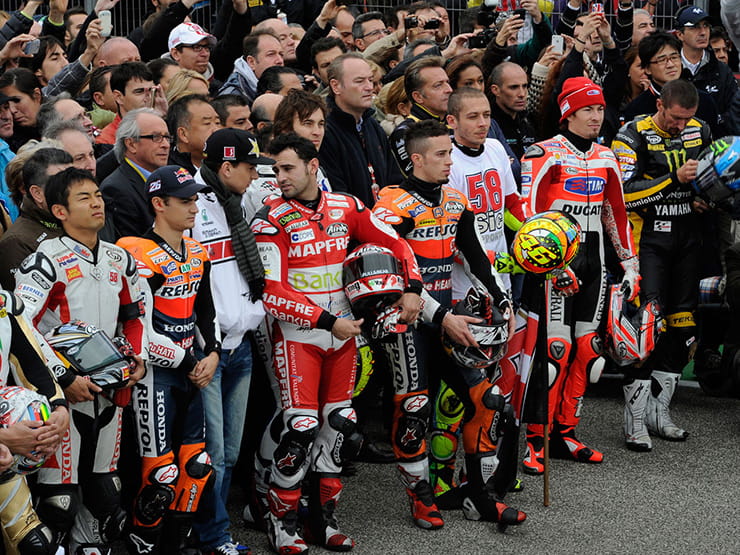 2011’s Valencia MotoGP was the first race after the tragic death of Marco Simonicelli at the Malaysian GP at Sepang the previous month and saw the whole paddock come together in a moving display of remembrance before the race with many riders wearing Sic’s number ‘58’ on their leathers and Rossi having a special commemorative helmet. The race was won by Casey Stoner’s Honda RCV, which had dominated the season and had already claimed the championship, winning 10 out of the 17 races in what was the final year of the 800cc formula. 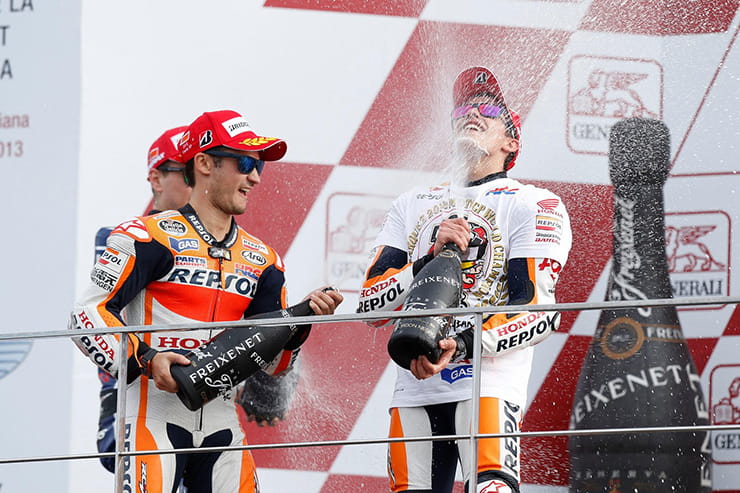 After two disastrous years with Ducati, Rossi was back alongside reigning champ Lorenzo at Yamaha but it was already clear a new generation was coming through. After a season-long battle with Lorenzo, Honda starlet Marc Marquez became the youngest ever premier class champion and first rookie champ since Kenny Roberts in 1978. Marquez went into Valencia with a 13 point lead over his Yamaha rival so, although Lorenzo won his third GP in a row, with Marquez grabbing third it wasn’t enough for the Spaniard to claim a dramatic first MotoGP crown. 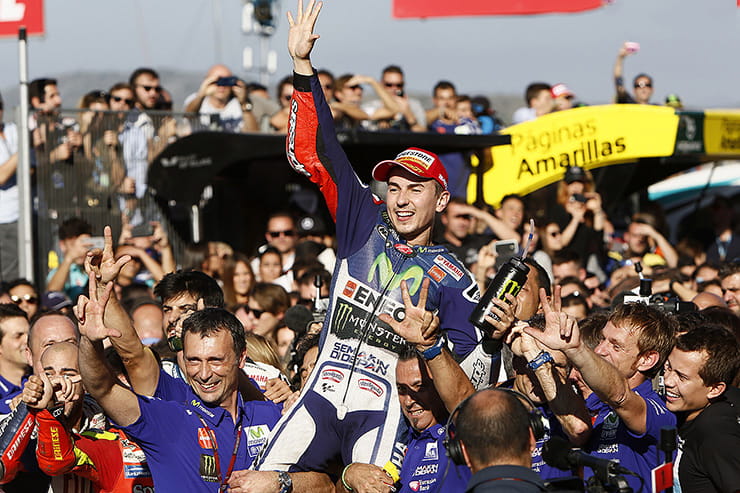 After Marquez won a second successive title in 2014, the 2015 MotoGP series was a different story, with a resurgent Rossi leading the series for much of the year but being slowly hauled in by teammate Lorenzo. Going into Valencia, Rossi led by seven points but, crucially and controversially, had to start from the back of the grid, a penalty resulting from a collision with Marquez at the previous round in Malaysia. Lorenzo won with Rossi finishing only fourth, giving the Spaniard the title by five points, the only time that year Lorenzo had led Rossi in the standings. 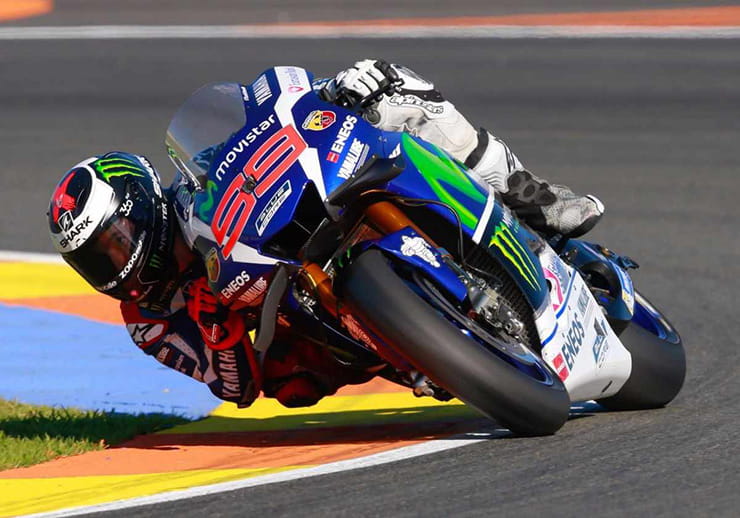 Although Marc Marquez had sealed his third MotoGP title two races earlier, Valencia’s season finale last year was still hugely significant for outgoing champ Jorge Lorenzo. Having signed to ride for Ducati the following year (and due to debut on the machine at the same track two days later in scenes reminiscent of Valentino Rossi six years earlier), Jorge Lorenzo also wanted to leave Yamaha with a bang – which he duly did by leading from start to finish ahead of Marquez and Ducati-mounted Andrea Iannone.