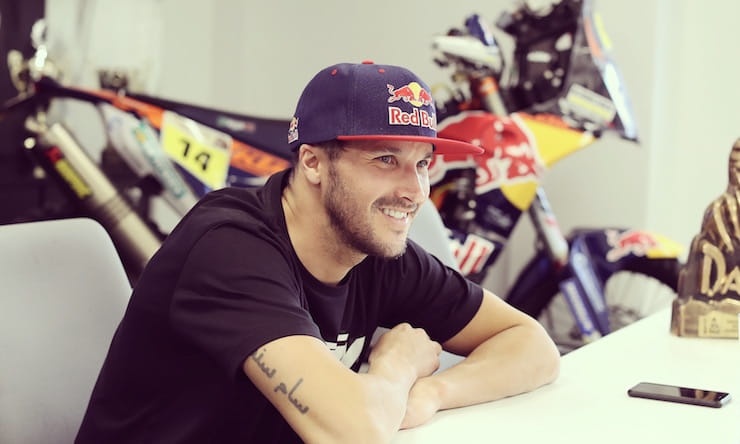 In January a young lad from Dorset went to the Dakar Rally and became the first ever British winner. Mr. Sam Sunderland won what is regarded as one of the toughest races on earth, but not only that, he did so with true style, guts and grace.

BikeSocial shared a Red Bull and a biscuit with the 27-year old at KTM’s rather plush UK headquarters at an exclusive event organised by the Austrian manufacturer who provided the 450 Rally Replica Sunderland rode.

We took along ten of our favourite photos from this years Dakar and got the main man to give a true insight into what’s going on in each shot and the emotions he was experiencing as they were captured. From how to approach water obstacles at 160kph to how you eat fizzy cola bottles at 3,000 metres above sea level.

The 39th edition of the Dakar saw 318 vehicles take to the start this year, with twelve gruelling stages covering more than 8,000km. 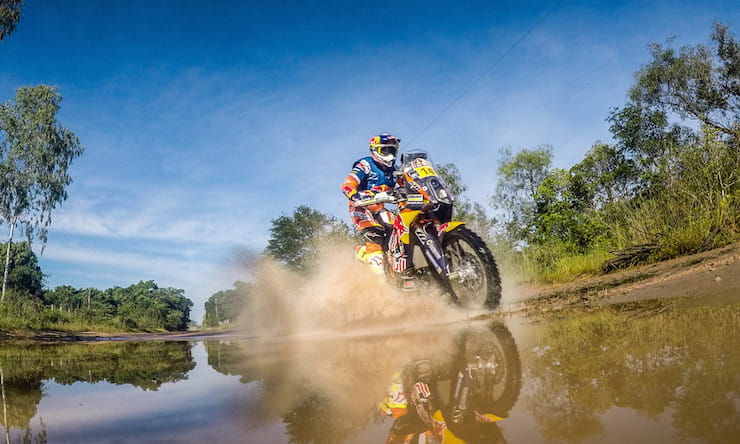 “This was the first stage, 39 kilometres in Paraguay. I’d never been there before and I was expecting it to be a cross between Argentina and Bolivia. But when I flew in it was like a jungle and full of puddles and mud - it was chaos.

I was conscious I didn’t want to drown the bike on day one, but sometimes you approach water obstacles too fast to slow down. You then have to make that split second decision to aquaplane across it. In this photo I’m trying my hardest to stick to the side of the puddle, where the water is at its shallowest and doing my best just to complete the stage with 12 days ahead of me.”

Dakar riders experience a wide range of temperatures throughout the race and even over the course of a stage. Although the deserts are red hot during the day, the early race starts can be bitterly cold. 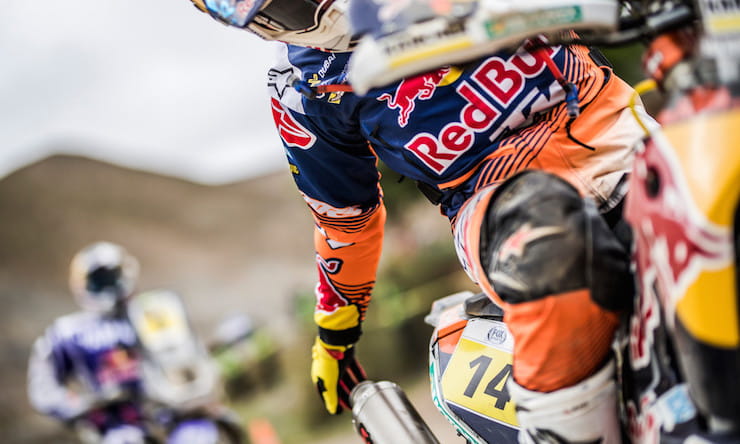 “In Bolivia it was particularly cold, I think it was around 2-3 degrees. This is me warming my hands up on the exhaust at the start line, but obviously I can’t do this when I’m riding. Instead I try and sneak my hands in the gap just behind my radiator where there’s a lot of warm air circulating.

I have a bad circulation problem, but I don’t like wearing thick gloves. I prefer a clean palm with stretchy materials on the back, to allow for better feel. Unfortunately, this means my gloves are extremely thin and my hands did get so cold on some stages.”

Despite growing up in Poole, Sam has spent the majority of his adult life living in Dubai. With hot weather all year round and living a stones throw away from the desert, Sam has been able to hone his rally riding skills and feels at home on the dunes. 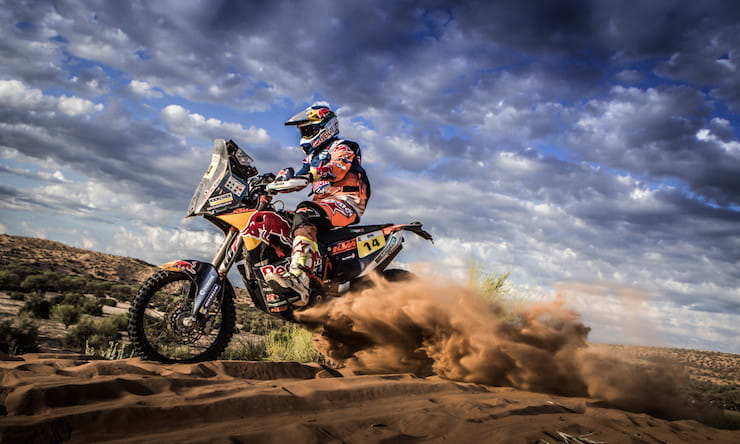 “I’m lucky I live in Dubai and read the dunes pretty well, it’s how I got into riding in the first place. Often you don’t know how big the drop off is the other side of dune, so as I approach them I’ll always angle off and turn into the peak of the dune. This way I can keep my speed up, look over the edge of it and then drop in.

As you can see from this photo, the dunes were particularly tough this year as they were full of vegetation. They weren’t your typical sand dunes and when you try and follow a compass head in through that, its impossible, as you’re constantly going in and out of the grass.”

Sam took the lead of the race on stage five after an impressive stage win. The pace set by the top riders this year was some of the quickest the rally has ever seen and saw some of his closest rivals crash out. 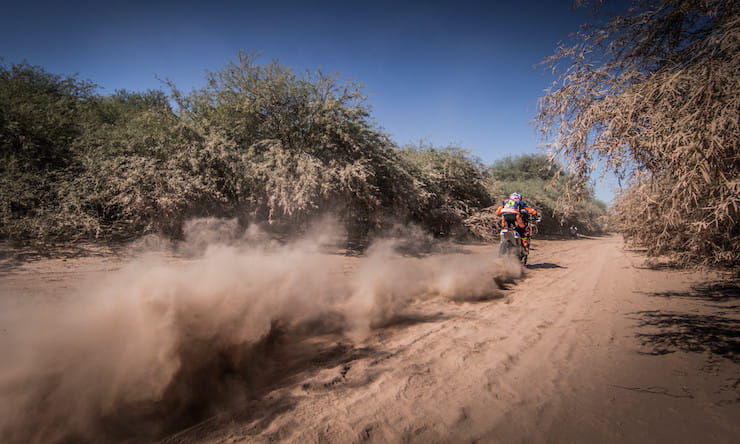 “As you can see we’re literally pushing the bike to its max all day and the only time you’re looking to protect the bike is if you have a 20-30-minute lead in the final stage. If you lose ten minutes you can go from first to fifth so easily.

It’s sometimes hard to describe the speed of the Dakar now. The calibre of riders that have entered it in recent years is incredible! It’s certainly not an adventure ride through Africa. You have five times world endurance champions, MX3 world champs, Supercross champs and they’re not even fighting to win.”

Fail to prepare... prepare to fail

The increasing speeds of the riders has prompted the Dakar organisers to make the navigation of stages tougher and this year proved to be some of the hardest of them all. 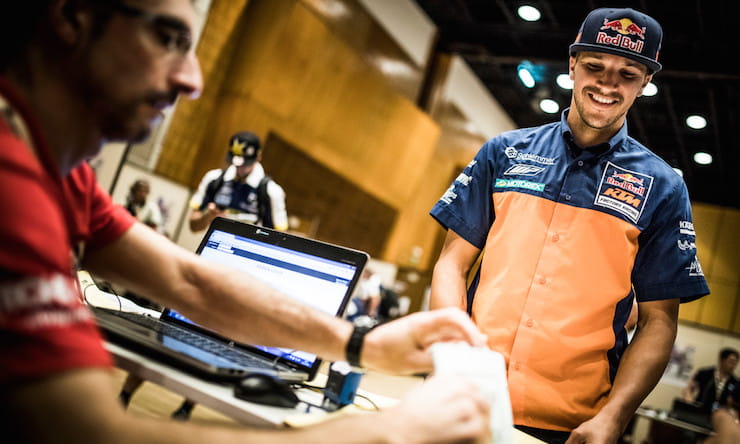 “You only get the road book when you arrive back the bivouac in the evenings. Despite every factory team having a Google Maps representative, nobody annotates or touches my road book, essentially it’s my life on that piece of paper. It’s therefore so important I make a note of every potential danger.

This year the organisers took out a lot of information. Even drivers who have professional navigators got lost on some stages and as riders we’re trying to do both. That’s why sometimes you feel like you’ve been riding the fastest you ever have all day, but if you make one small navigational error it can cost you massively on the timesheets when you arrive back.”

Cooking up a storm

Wolfing down cold pasta at 4am in the morning is not everyone’s cup of tea, but on some stages the riders are in (or should I say off) the saddle for up to 12 hours a day, burning around 6-7,000 calories! It makes nutrition and hydration a vital part of the Dakar and it’s an area Sam feels he gained a key advantage over his competitors. 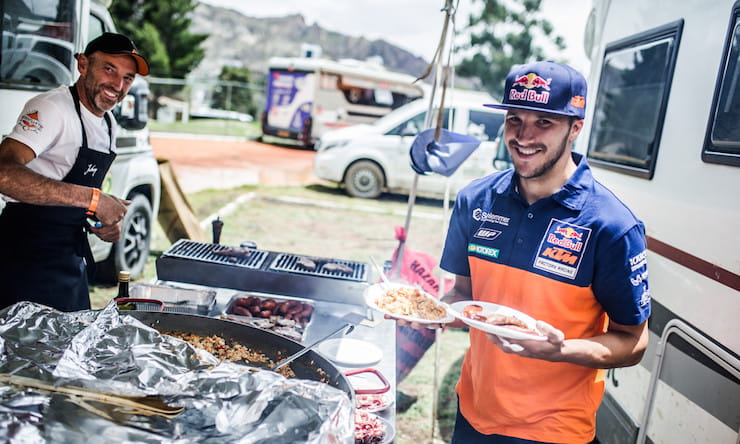 “This is on the rest day in La Paz at 3-4,000 meters above sea level. We’re really lucky that KTM bring some chefs to the race for us, so this day they cooked a massive paella for the whole team. It was mega important for me to stock up during this day and put on the pounds for the next week.

In previous Dakars I used to have special energy gels, but in 45 degrees heat they made you feel sick. So my nutritionist told me to take things I like, as I would get more energy out of something I enjoy eating rather than a special bar that you take one bite of and throw away. So this year I took Nutella sandwiches and and fizzy cola bottles and it done the trick!”

The mechanics and assistants have an equally tough Dakar and can cover 6-700km a day, regularly getting back later than their riders at the end of a stage. Their commitment to the race and the support they show doesn’t go unnoticed by Sam. 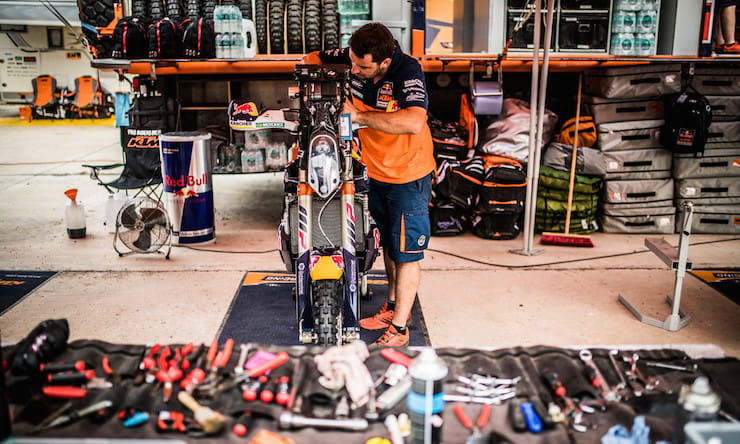 "This is my mechanic Grilly, he’s awesome and made the race for me. Not only does he fix the bike, he’s someone to talk to as a friend. I trust my life with his work and he trusts me to bring the bike back in one piece each day. Here he’s rebuilding the bike on the rest day after taking it right down to the chassis.

There’s often a lot of stuff that goes on behind the scenes of the Dakar that people don’t see. From organising flights and hotels to maintaining the bikes and trucks in the evenings. It’s a real team effort and it was so nice to win the race this year and reward the whole team with the confidence they showed in me.”

A total of 97 motorcyclists made it to the finish line this year. A staggering achievement when you hear the relentless terrains and obstacles riders have to deal with daily on the Dakar. 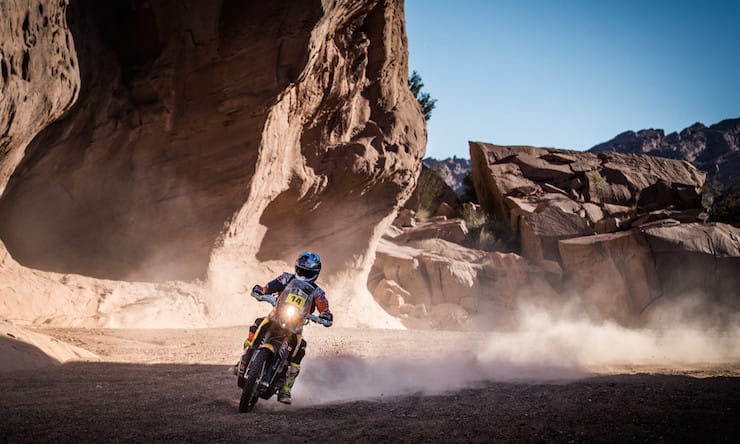 “In sections like this I’m always so conscious of the stones, as the ground is an old river bed. As you can see in the corner of the photo there’s a load of protruding rocks. And when you’re going from the sun to the shadow you can miss them so easily. It’s horrible when you do hit one, the bars make a horrible noise and the back end goes out on you and you just pray you don’t crash.

The problem is you feel like you’re focusing and you feel like you’re not getting tired because your concentrating so hard. But when you do hit a rock or start missing things you start to question whether you can see as well as you could earlier and start to think whether or not you are getting to dehydrated.”

The 2017 the Dakar Rally crossed through three countries and in Boliva alone, a reported one million spectators lined the streets to cheer in the competitors. It’s these moments that make the race so special to Sam. 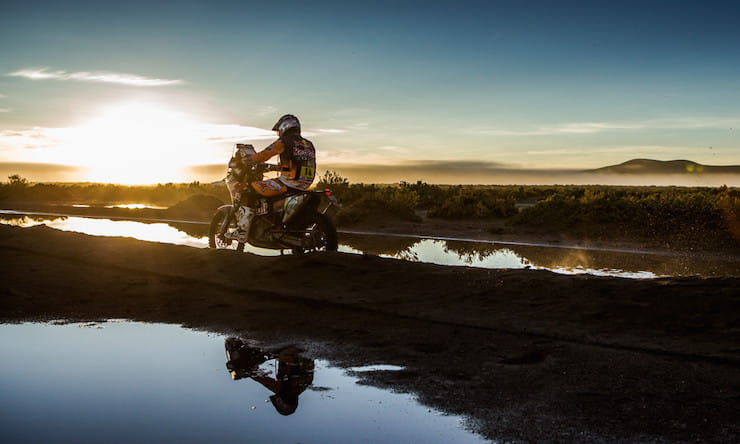 “Some of the places you pass are pretty mad, it’s like Mars. You get to appreciate some of the sights on the liaison, because you can have a little look around. I think on this day I would have been better on a jet ski.

Now I’m back, I see photos with landscapes I barely even remember passing. For me though I love seeing the shots of us riders with the fans and spectators. They where insane this year and so passionate, they truly make the Dakar memorable.”

On the 14th January 2017 Sam crossed the finish line 32 minutes ahead of his KTM factory teammate Matthias Walkner. Not only had he successfully finished his first ever Dakar, he became the first Brit ever to win in any category for 38 years. 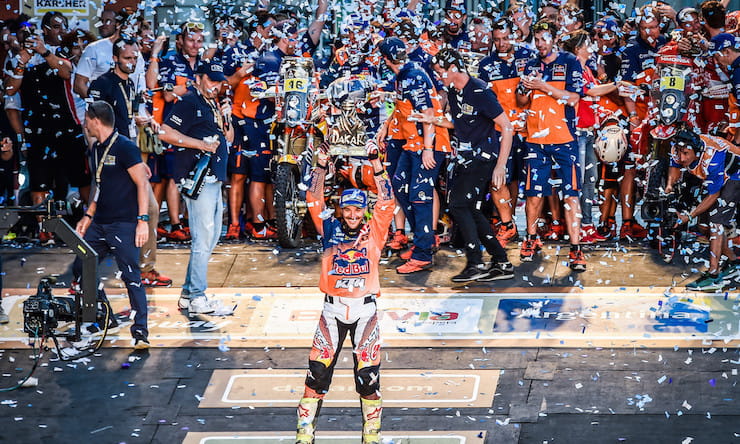 “I knew there was pressure on my shoulders, but I don’t think I realised how much until I crossed that line. It was really special and KTM sure know how to party!

From having to watch the Dakar in previous years on the sofa due to broken bones to winning the rally this year is incredible. It makes all the ups and downs worth it. Even talking to you now it’s mega to reflect on it all!”

Sam now heads to testing out in Spain, before kicking off his season at the Abu Dhabi Desert Challenge at the beginning of April. 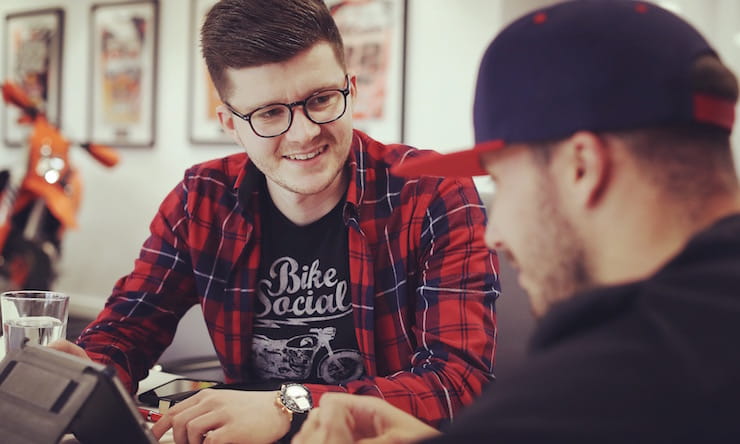