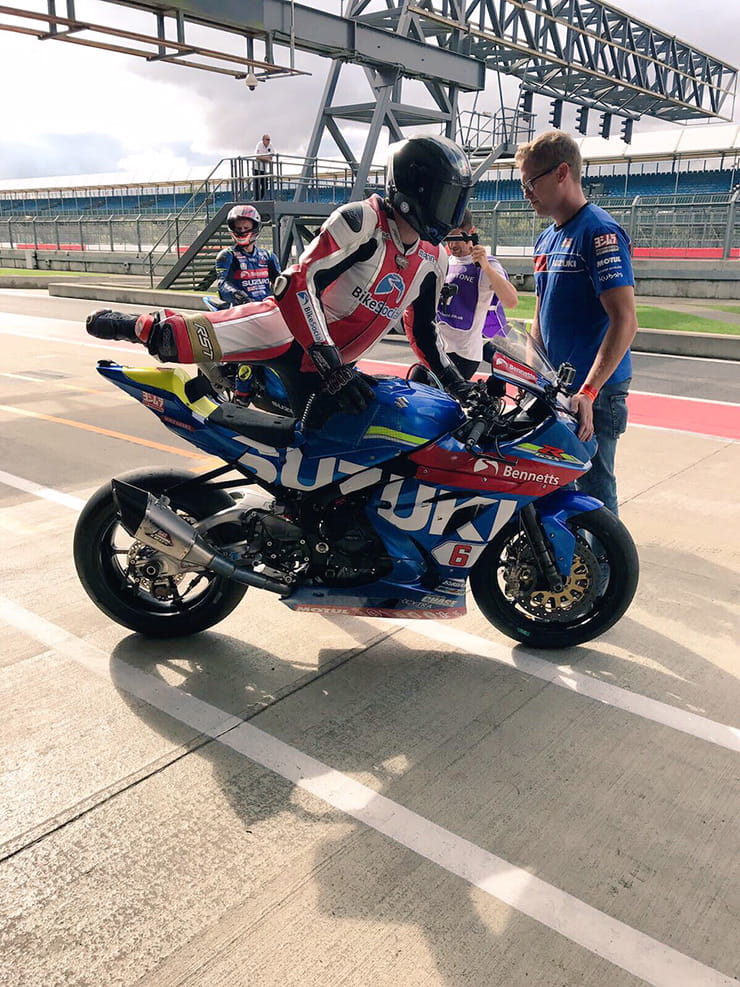 Showroom to Superstock to Superbike: Suzuki GSX-R1000R, then we ride the BSB bike!

When a new litre sports bike (or 1198cc in Ducati’s case) is officially announced and has its covers taken off at one of the major motorcycle shows you can bet your bottom dollar that race team bosses will wonder if that’s the bike that can win races and even the championship in their domestic race series the following year.

Of course, with Suzuki and Honda unveiling their latest incarnations of the GSX-R and Fireblade respectively, that was always going to be case for so many teams across the globe. Those running the previous models were getting a little desperate for some fancy new tech and had firmly placed their apples into the proverbial basket hoping that the new one would answer any existing problems.

Well, even if you’ve been hiding under a rock you’ll still know that both Honda and Suzuki had their teething troubles with their so-called saviours but gradually, thanks to plenty of track time, development and a thoroughly professional set of teams they’ve chipped away and ended up with (at the time of writing) a Senior TT and three BSB wins between them.

The 6th generation of the 1000cc Suzuki sports bike came into our lives earlier this year with two options, the standard GSX-R1000 and the slightly more refined 199bhp GSX-R1000R with its quick shifter, auto blipper and trick suspension, available for a little over £16,000.

On the roads, Michael Dunlop stormed to Senior TT success at the Isle of Man while on track in the British Superbike Championship, Sylvain Guintoli and Taylor Mackenzie have struggled to harness the outrageous power of the brand-new bike. A few bright outings eventually lead to Guintoli taking victory at Assen in race two.

So, we went to Silverstone, scene of the annual Suzuki All-Stars Track Day – an event for Suzuki customers to enjoy being on track with their favourite Suzuki riders, past and present. There we spoke to Richard Cooper, Bennetts Suzuki’s Superstock title challenger, and Mackenzie about the differences between the standard road bike you or I could buy from a dealership to the Superstock bike Cooper races and then the changes that need to be made to create a race machine eligible for the British Superbike championship. 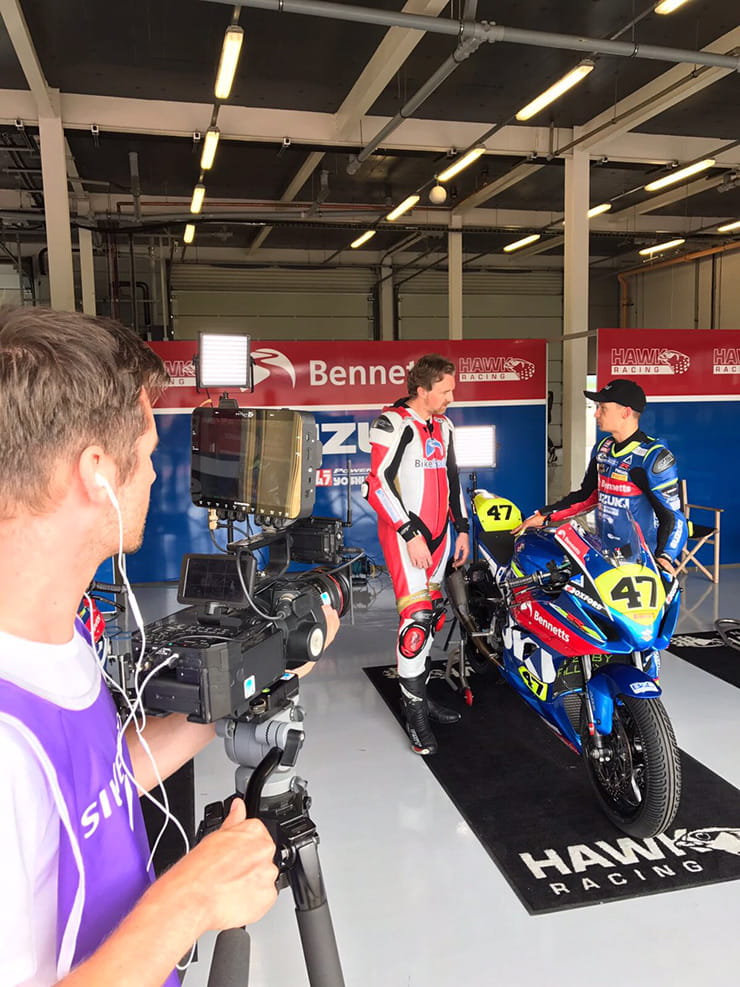 RICHARD COOPER: "We start with the standard road bike and the first thing we do is to remove the bodywork and as you can see, this bodywork is an exact copy without the lights. It’s lighter weight and must resemble the original bike image.

The next thing we do is change from road specification tyres to a race tyre which is still is treaded tyre but is a softer compound which is better for racing. Then we also have wet weather tyres when conditions are needed.

The brakes must stay standard but you are allowed to change the brake disc for an aftermarket disc but generally we tend to use the standard disc due to it already being a Brembo component so it’s already pretty good.

Engine: the rules this year have slightly changed in Superstock so we used to be able to change the head gasket and so a few other little things. But now they’re completely standard engines. On this bike, the engine’s never been out all season long which I think justifies just how good the Suzuki is. We can fit a specified wiring loom which lets us to alter the fuelling of the bike to lean it off or richen it up when we need to do." 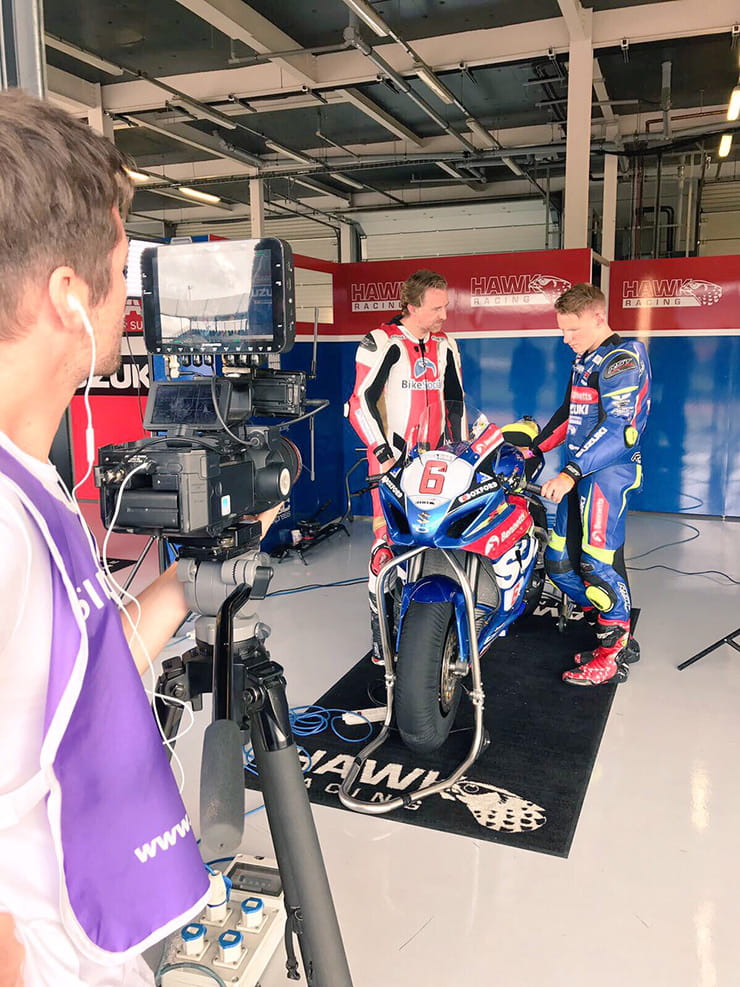 Look after her, I need her this weekend!
Taylor Mackenzie allows BikeSocial's Michael Mann to ride his BSB bike

So, how do get to a Superbike from a Superstock bike?

TAYOR MACKENZIE: "There’s a few main things, the first thing being the Brembo brakes, some upgraded brakes. We’ve got a bit more power so we need a bit more stopping power. We’ve also got an adjuster to adjust your front brake for any brake fade during the race, we don’t generally have to use it too much but places like Donington where you’ve got a lot of hard braking you sometimes get a bit of fade during the race.

The second thing is the wheels, we’ve got lighter racing wheels which helps the handling a little bit, that’s within the rules, you can change your wheels unlike Superstock where you have to run the standard wheels.

Electrics: we’ve got the MoTeC dash, which is the standard dash that everyone uses in BSB. There’s no traction control, no ABS, nothing like that and it’s up to your data guy, your computer engineer, to work from that. You’ll see the guys plugging in the laptop during the race weekends, that’s what they’re doing – they’re pulling the data out and adjusting the fuel maps.

The engine is modified so we’ve got 20-30 more horsepower than the standard GSX-R, we change the camshafts and a full Yoshimura exhaust." 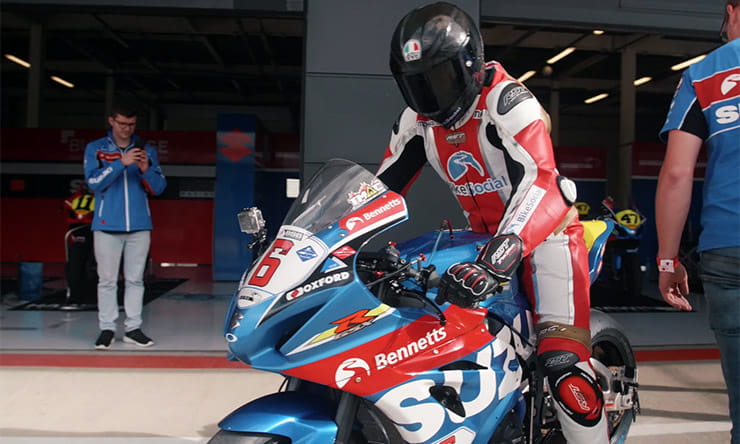 “Look after her, I need her this weekend,” says Taylor Mackenzie after he grants permission for me to ride his actual BSB race bike, just five days before the Silverstone round of the British Superbike championship – where he was to finish 7th in race one before nasty high-side at the beginning of race 2 curtailed the 2016 British Superstock champion’s season.

With 15% more power than a standard GSX-R1000R in the shape of 30bhp, a 230bhp sleek, snarling superweapon was going to be a real handful. That is as much as I knew. Oh, and the fact the gearbox was set to race-shift pattern as Taylor Mackenzie prefers which caused the ‘1 up, 5 down’ repetition to myself all morning and picturing those on-board shots of MotoGP gods accelerating out of a corner and clicking down…that’s down.

Feeling a bit ‘factory’ as Leon from the Bennetts Suzuki team warms the bike up, removes the tyre warmers and rolls her out of the garage, Taylor’s words and my own race-shift reminders were ringing in my ears still.

As I rolled down Silverstone’s pit-lane that soon fell by the wayside as I noticed how solid the bike felt, especially at the rear. I felt jacked up and with a load of weight over the front. Taylor had already suggested that one of the areas he’d been working on recently is rear traction under braking.

One of the best traits of the standard GSX-R1000R production sports bike that I had experienced several times already on both road and track is the beautifully smooth, predictable and strong power delivery but this was a different kettle of fish. Rolling around the deliciously ballsy Aintree left-hander and onto the Wellington Straight for the first time I knew there weren’t going to be many opportunities to pin the throttle…so I did and almost made a right mess in my leathers.

Jeeeeeeezus! The world passes you by damn quickly and no sooner had I ploughed through the surprisingly close-ratio gearbox I was into the braking zone for Brooklands. Off the throttle, letting the rock-solid suspension settle the bike the slightest touch of front brake and I felt like I’d stopped still such was their ferocity. The Pirelli slicks were up to temperature so I tipped confidently into the long, late-apex left-hander and with a knowing grin underneath my AGV.

The bike is entirely set-up by Hawk Racing and T-Mac to understand the slightest and most sensitive throttle, brake or rider movements and designed to so on track and track only. Therefore there’s no point in trying to compare it to any 200bhp+ road bike I’ve ever ridden. This is a honed, toned, thoroughbred – perhaps the best production-based Suzuki in the world. And I felt like a passenger. Sure, the likes of BMW, Ducati, Yamaha, Honda, Aprilia, Kawasaki and Suzuki have each treated us to massive power and electronic advancements in recent years but they must comply with European regulations and have been designed with European roads in mind too.

This extraordinary experience is all about harnessing a vast amount of power, in terms of acceleration, brakes and grip – a frightening amount of mechanical grip that I’d get nowhere near exploring the limits of, nor would I want to. There’s no chance I was binning the race bike so close to a BSB championship weekend, for me it was about not looking like a numpty having been handed the proverbial keys but equally riding it hard enough to warrant these words. The slick tyres and stiff chassis allow the bike to fly arrow-like towards an apex brimming with confidence and almost laughing in the face of its rider who is, for every second of every lap of every race, attempting to find that 100% limit.

You begin to understand how physically fit BSB riders have to be to heave a beast like this around the UK’s circuits, easier when it comes to the fast, flowing tracks like Silverstone or Assen but fighting with it around Cadwell Park or Knockhill, well that must take so much effort to exploit the power and keep everything smooth.

On lap four, when I was feeling a little less frightened, I thought I was picking up the pace a little around the fast right and left of Abbey and Farm before getting on the brakes and back to second gear into Village when Richard Cooper on Bradley Ray’s race bike flashed past so quickly it felt like I was on a C90, he was being chased by Mackenzie and team-mate Sylvain Guintoli on the road version of ‘my’ bike…just to underline the significant gap in class and ability. I had been firmly put in my place but that didn’t stop me enjoying full throttle down the next straight – holy heck. Massive respect to anyone who has the cojones and skill to race at BSB level.

As the chequered flag drops at the end of the session I treat myself to a full, deep breath. On one hand I was grateful for not dropping her but on the other hand I just wanted to do it all over again.

HUGE thanks to the Hawk Racing Team and Suzuki GB.