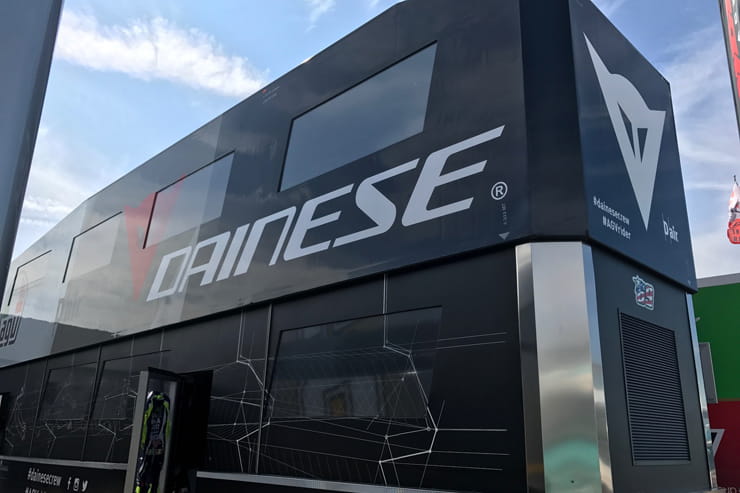 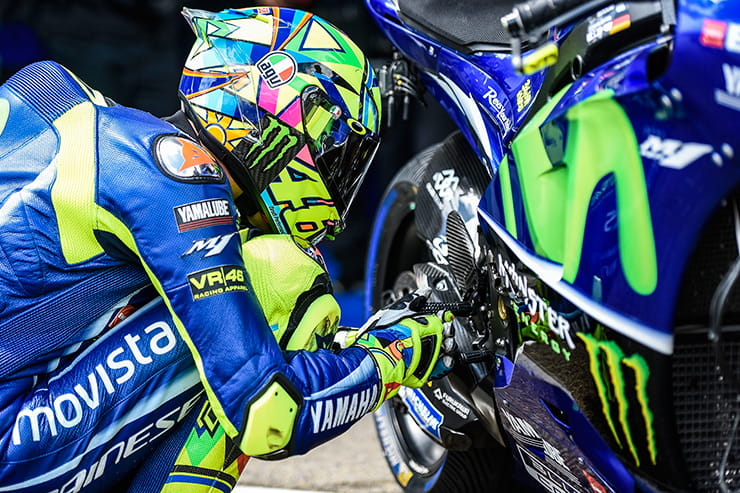 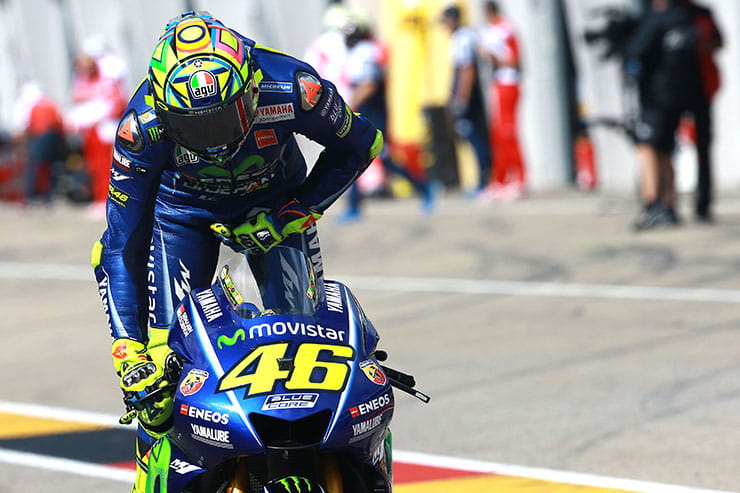 Each time Valentino Rossi rides out of pit lane, we look out for his now-famous ritual of standing on the footpegs to pull his leathers (and Y-fronts presumably, Dainese Y-fronts maybe) from his bum crack and then adjusting, erm…mini-Valentino. Just one of the Italian’s superstitions, as it transpires.

Most racers, across all formula, have their personal procedures before they race to help focus the mind or in their opinion, to preserve them from bad stuff happening; whether it’s putting the left boot on first, wearing ‘lucky’ socks or getting on the same side of the bike each time. For Rossi, whether it’s crouching next to his M1 Yamaha in an almost fetal-like position outside the garage, talking to his bike on the grid or even applying his own stickers in some circumstances, he goes through the same routines to prepare himself.

A couple of weeks ago at the British MotoGP at Silverstone, the first free practice on Friday morning came to an end, during which Rossi set 5th fastest time.

Interesting enough but once back in the Factory Yamaha Racing pit garage, the 38-year old, 9-time world champion, peels off his custom fit Dainese leathers, complete with D-air technology and hands them to one of his three trusted right-hand men, Max Montanari.

Meanwhile, his AGV helmet goes to Maurizio Vitali, former GP 125cc rider, and second of Valentino's trusted aides. Vitali is the owner of the elbow that, out of superstition, Rossi has to touch before each session. Having known each other for over 20 years, the elbow is supposed to bring Rossi luck. If I had that kind of ritual collection I’m sure I’d forget one and end up stressing as I pulled the leathers from my bum while trundling down pitlane.

Incidentally, any Rossi fan will instantly know who the third of the three right-hand men is: Alessio Salucci, known simply as ‘Uccio’.

After FP1, Montanari dexterously scoots through the paddock with Rossi’s still warm one-piece hoiked over his shoulder to drop them at the sleek, black, two-story Dainese race truck. Why? Because after every session throughout a race weekend, every Dainese-sponsored rider has the opportunity to take their leathers back to the truck for a thorough once over. They are cleaned and dried in specially constructed machines inside the lower level of the truck, while the D-air airbag has its batteries recharged and the GPS data from the previous session downloaded. The system’s control unit monitors the sensor signals 1,000 times a second using a sophisticated triggering algorithm and statistical, performance and health information (including heartbeat) is gathered but only the team is given this information, under encryption. Astonishingly, before each race weekend, Dainese technicians calibrate the D-air systems to make sure the angles a rider gains at certain parts of the circuit do not trigger the system!

The whole cleaning and downloading process takes just one hour before Max and his peers from around the race paddock return to collect their ‘good-as-new’ leathers. 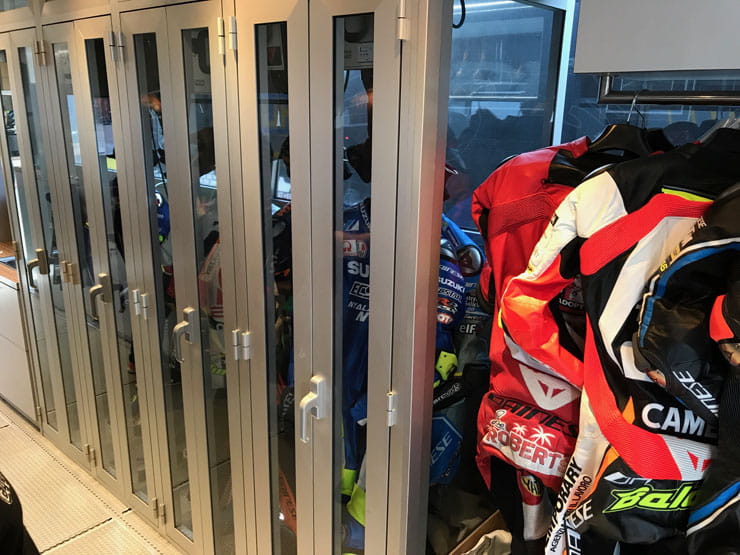 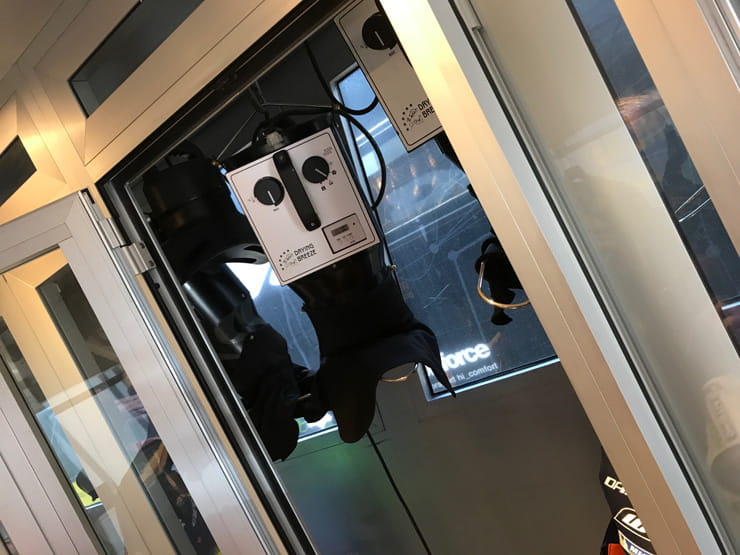 As I gaze around I become only too aware of the number of suits here. Other than Rossi, there’s suits from MotoGP, Moto2 and Moto3 riders Andrea Iannone, Jack Miller, Pol Espargaro, Franco Morbidelli, Sandro Cortese, Joan Mir and more. 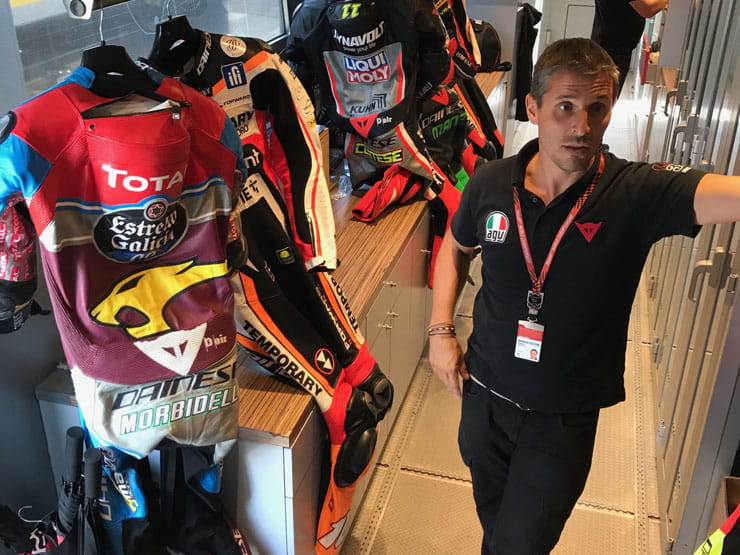 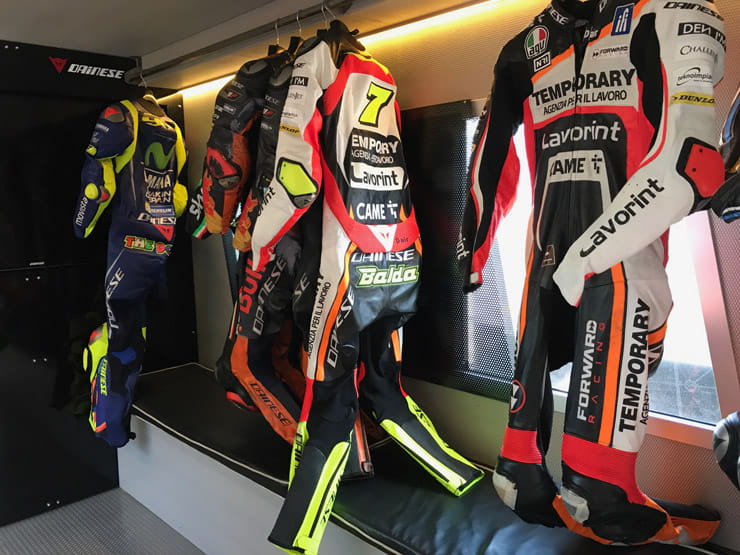 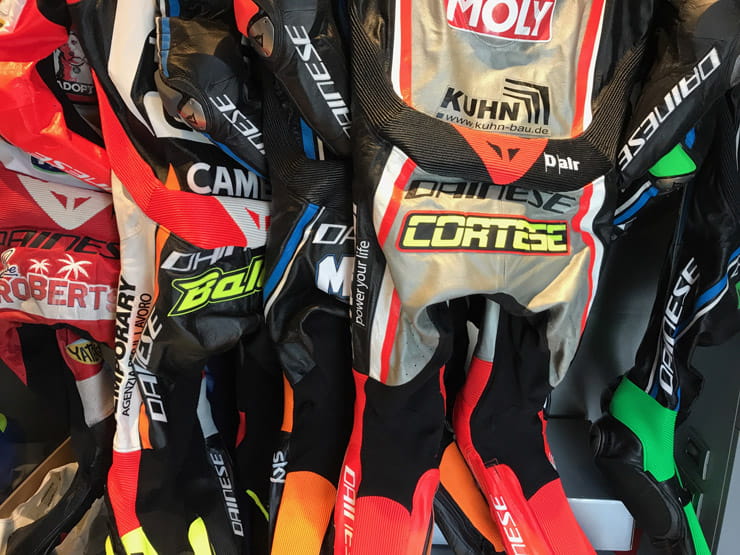 Each rider had 4-5 suits per weekend so the race truck is a busy place all weekend but at least the staff don’t miss out on any action as the moving laboratory/highly exclusive launderette is equipped with a handful of screens tuned into the on-track action. That way, the team on board know that if one of their riders goes down then the data retained in the D-air system may prove the cause of the accident.

The D-air system is nothing new yet continues its development, in a range of products including textile jackets and even ski wear. Even though the technology has only been on the shelves for customers to buy since 2011, the first airbag used in a race was in 2007 by Mr Rossi, and this is a fine example of just how the development of protective clothing starts on the race track. 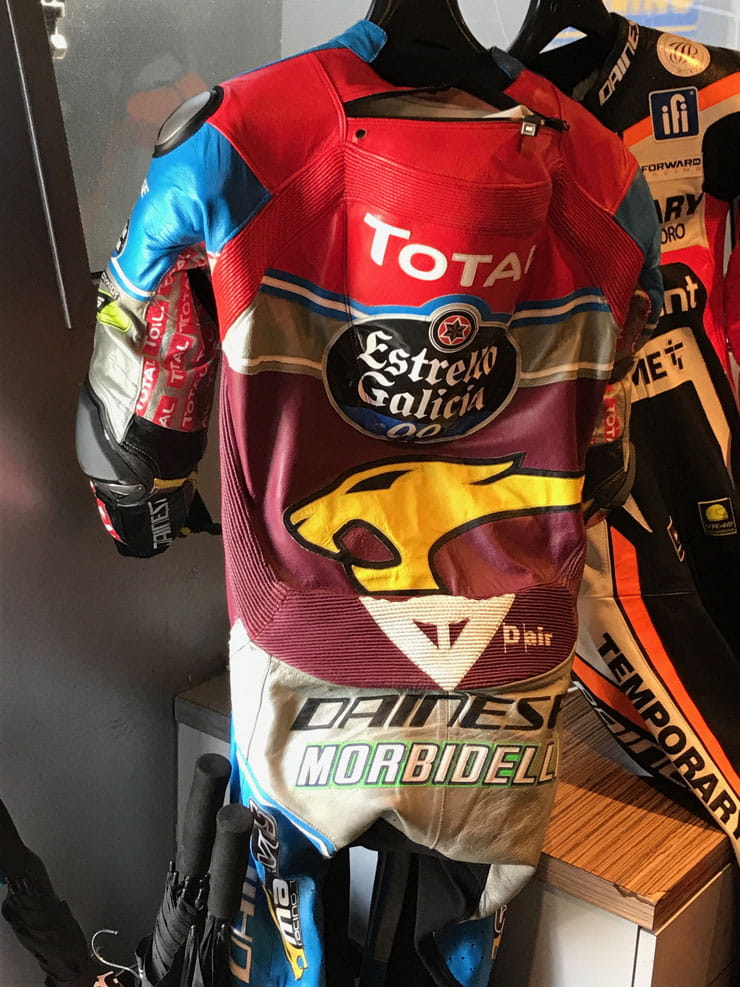 “Most of the development of our customer products start here. If we have a new pair of gloves the racers will wear them first and offer their feedback to see if something can work better,” says Stefano Corte, Racing Service Manager

Marketing Director, Gabriele Gianello, adds, “Ultimately, it’s the riders who are developing a product that is saving lives and therefore feedback from them is important.”

Why don’t they carry out on-site repair work though? Stefano replies, “We simply do not have the space for all of the specialist equipment nor the quantity of coloured leather for all the rider. For example, there are 366 parts per custom suit. I remember this number – it’s one year plus one day!”

The same goes for AGV, owned by Dainese for the past 10 years, and this year celebrating its 70th anniversary: after every GP race weekend session, the engineers will change the visor and tear off system, dry and clean each helmet. By offering this service to all its sponsored athletes, Dainese’s on-site technicians can receive instant feedback from riders for both the helmet and suit. 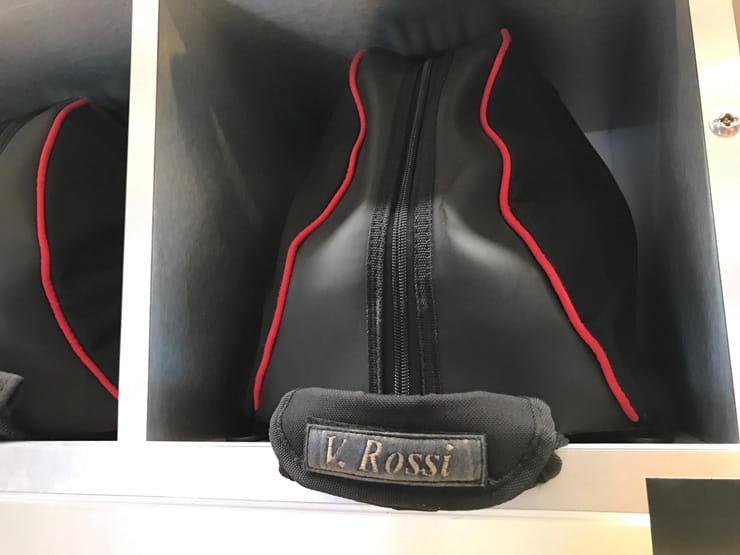 While Rossi has his own made-to-measure cheek inserts, his AGV Pista GP is the same as any you can buy off the shelf – well, except his special paint jobs. It was feedback from the multiple world champion that lead to the visor being increased to give a 15-degree wider field of vision.

So, the next time you pull on your Dainese gloves (left one first?!) or AGV helmet just think, that bloke in blue who you were cheering on last weekend was responsible for its development.