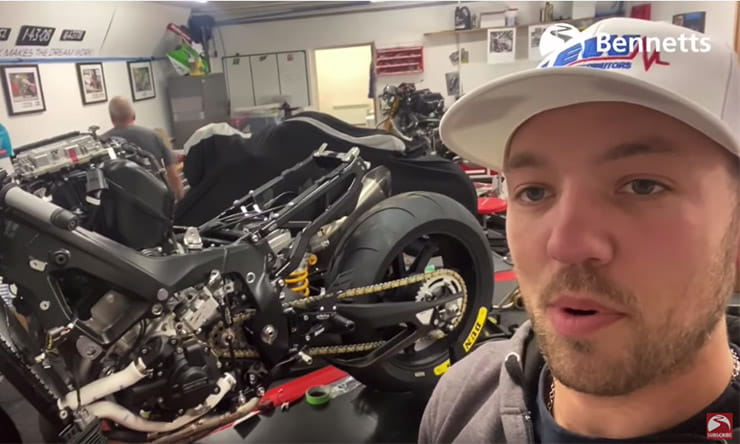 Peter Hickman, the world’s fastest road racer, gave us an exclusive look behind-the-scenes at his workshop. The current Isle of Man TT lap record holder, courtesy of the sixth lap of the Pokerstars Senior race in 2018 where the BMW S1000RR lapped the 37.73-mile Mountain course in 16m 42.778s giving him an average speed of 135.452mph, takes us inside his Aladdin’s Cave.

In an MTV Cribs style, the Smiths Racing man takes us on a garage tour showing us memorable and collectable gems from his racing career, from his first ever set of racing leathers through to the 2020 Smiths Racing BMW he is due to race in the Bennetts British Superbike championship. Plus many race bikes in between.

We see the seven laurels from the seven Ulster Grand Prix wins from last year, the unfinished Yamaha R6 due to be ridden in the Supersport classes at the now-cancelled 2020 Isle of Man TT, Frankie Chili’s 1986 RG500 that now belongs to Hicky, what’s left of the Norton lightweight bike, and of course the 2018 135mph TT lap record bike.

Upstairs in the unit and TT leathers from the Superbike, Superstock and Supersport classes as well as BSB, North West 200 and Ulster GP leathers hang in formation.

His 2015 Isle of Man TT and Ulster MV Agusta F3 675 that, with a 126mph lap, is the fastest ever MV around the TT! Tucked away alongside that is the Smiths Superstock bike from 2018 – Hicky’s first ever TT winning bike.