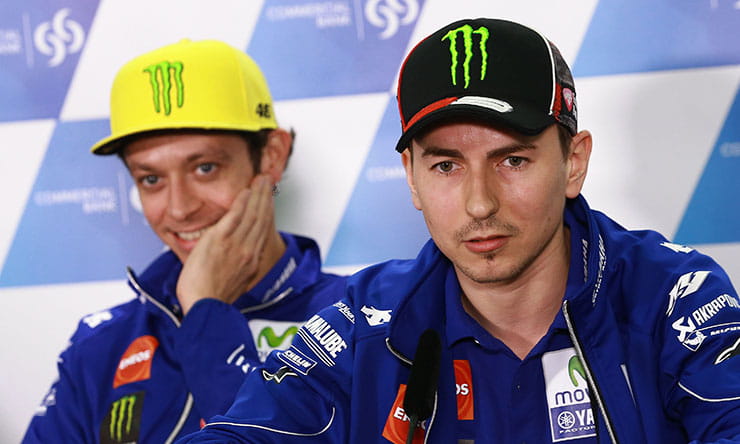 It’s not just on the track where the top three are knocking lumps out of each other, there are some boxing style mind games going on off it too...

The race for MotoGP supremacy now starts behind a microphone on a Thursday press conference, not in first practice on the track, according to one of Britain’s leading sports psychologists.

The MotoGP pre-race press conference used to be a polite formality where riders would smile and give corporate answers to innocuous questions, but it has, according to one of Britain’s top sports psychologists, turned into a session all of its own, where racers use boxing-style tactics to psyche out the opposition. The race begins behind a microphone as riders try to crack their rivals mentally, way before they even put their leathers on.

Following Rossi and Lorenzo’s argument about Rossi’s overtake on the Spaniard at Misano, the two Yamaha men’s feud, which restarted after a season-defining collision in Sepang last year, top sports psychologist Dr. Victor Thompson reckons that MotoGP is becoming like boxing.

He said: “Lorenzo is on the back foot this season, while Rossi and Marquez are in an ascendancy. This will put Lorenzo under massive pressure from the fans, the media and from the team. Rossi is trying to assert his dominance on the track and off it, he is trying to rattle Lorenzo. Imagine a pre-fight press conference between two boxers, if done correctly you can get your opponent to question what they are doing and assert more pressure on them.”

While Lorenzo was tight lipped about the move when he spoke to TV crews prior to the podium, the post-race press conference was a more no holds barred affair with Lorenzo accusing Rossi’s overtake of being “too aggressive” going onto say, “he didn't need to make this overtaking, but you know this is his style. Other riders overtake more clean…” This brought an audible laugh from the nine-time world champion Rossi who raised the point that overtaking in this manner is common place. He responded: “This is not true. I don't know what I have to say – Marquez overtake ten times like this at Silverstone. What you say like this is not true.”

The tit-for-tat continued between the pair for some time with some of the amassed crowd beginning to laugh, possibly at the awkward path the press conference had taken.

One rider who unexpectedly came out in support of the move Rossi made was Marquez, stating in the media that he saw nothing wrong with the move in question.

Dr. Thompson adds: “Marquez’ on track behaviour is probably some of the most ‘on the edge’ riding we see. As soon as he is critical of Rossi for the pass at Misano, he automatically brings similar moves that he has made into question. With regard to how Lorenzo will be feeling, I think after the comments made at the end of last season [Rossi accusing Marquez of assisting Lorenzo to the title] Lorenzo is probably feeling disappointed that his compatriot has not sided with him again. He may feel slightly isolated in the paddock.”

So as the attention now turns to the next round at Aragon where all eyes will be firmly fixed on the pre and post-race press conferences.

Beyond that, next year brings a whole new dynamic for MotoGP mind master Rossi to deal with, arch-rival Lorenzo switching to rivals Ducati – the team where Rossi endured the worst two seasons of his career – and young gun Maverick Vinales moving into the Yamaha garage alongside the seven-time premier class champion, who will be 38 at the start of the season.

With the trash talking off the track proving just as spicy as the action on it, it might well be worth tuning in on Thursday to see what psychological warfare takes place in the press room.

Valentino Rossi is well known for trying to get under the skin of his fastest racing rivals. Here are five of his most famous feuds:

Biaggi was the darling of the Italian media before Rossi came along but even before the pair raced in the same class together for the first time (in the 2000 500cc world championship) the pair could not have been further from friends. Notable battles included Biaggi giving Rossi the elbow at Suzuka and an off-camera incident prior to the podium at Catalunya in 2001, when Biaggi emerged with mark on his face, which he brushed off as being “bitten by a mosquito.” Biaggi never did beat his countryman to a title and found himself without a ride in 2006. With all the doors to competitive Grand Prix rides closed to him, he made a successful switch to world superbikes in 2007.

Despite his unfettered dislike of Biaggi, in 2003 Rossi’s biggest rival was undoubtedly Sete Gibernau. That year Rossi took the championship by 80 points from the Spaniard but it was in Qatar the following year that things really kicked off, when Rossi accused Gibernau of pressuring the officials into disqualifying the him from qualifying for tampering with his grid spot to gain more traction from the dusty desert track. Gibernau won the race and moved to within 14 points of the Italian at the top of the standings, but Rossi’s psychological battle with Sete went into overdrive and he won the last three races of the year to break his rival. Sete never won another Grand Prix.

For 2007, Rossi’s biggest rival was the taciturn Aussie Casey Stoner. Ducati-mounted Stoner forced Rossi’s hand by taking the first win of the season and Rossi ultimately played catchup all year, but couldn’t get the better of Stoner who took his first of two MotoGP crowns. In 2008 the pair clashed a number of times, most memorably at Laguna Seca’s famous corkscrew, when Rossi overtook on the inside of the steep downhill Corkscrew section, running across the dirt and almost causing a collision between the pair. Post-race Stoner said “I have lost respect for one of the greatest riders in history." A comment he later apologised for. The next high profile coming together of the pair was during Rossi’s ill-fated stint at Ducati, when Rossi made a lunge up the inside of Stoner and took his rival out of the race. After the race Stoner and Rossi had an almost comedic exchange that with Rossi stating “I make a mistake” to which Stoner responded “Yeah obviously your ambition outweighed your talent.” Classic.

Probably one of the hardest fought (and still ongoing) rivalries in modern motorsport is that of Rossi and his factory Yamaha team “mate” Jorge Lorenzo. Lorenzo joined the team as 250cc world champion in 2008 and while Rossi took the championship, Lorenzo showed plenty of pace and got under the Italian’s skin. Controversially, the Yamaha team built a dividing wall midseason, effectively splitting their set-up to two individual teams. Officially, the reason was that the two were running different tyre brands (Rossi on Bridgestone and Lorenzo on Michelin) although the divider and lack of data sharing, said to be at Rossi’s behest, was to stay when they both ran Bridgestone the following year. The pair had a titanic battle for the title last year, won by Lorenzo in controversial fashion, and Rossi tried to belittle his opponent when rumours of him moving to Ducati surfaced in 2016. “To sign with Ducati you need to be brave, you need big balls,” said Rossi, “so I think Lorenzo stays with Yamaha." Jorge will ride for Ducati in 2017.

The relationship between Rossi and Marquez seemed to be quite amicable with big smiles and handshakes all around – that is until Phillip Island last year. With Rossi and Lorenzo battling for the title, and Marquez struggling with the RCV and out of contention. Rossi believed that Marquez was out to aid Lorenzo to the title stating “it’s clear Lorenzo has a new supporter, which changes [things] a lot because Marc has the potential to go away alone and it can be another type of race.” After Rossi’s attack on the Spaniard in the full glare of the media, the Sepang round started and as Marquez and Rossi raced it all looked far too familiar! The two riders swapped places numerous times until Rossi frustration spilled over. Rossi pushed Marquez to the outside of the track while glaring directly at him, Marquez went down and the ‘did he / didn’t he kick him’ debate raged around the world. Race direction hauled both riders in and Rossi started the final round from the back of the grid. Not even an appeal to the Court of Arbitration for Sport could help and although Rossi started 26th and finished fourth, he was five points behind Lorenzo in the title race.

Thanks to Dr. Victor Thompson, who is a sports psychologist specialising in car and bike racing and who commutes around London on a Kawasaki. He can be contacted through his website: www.sportspsychologist.com/motorsport.html 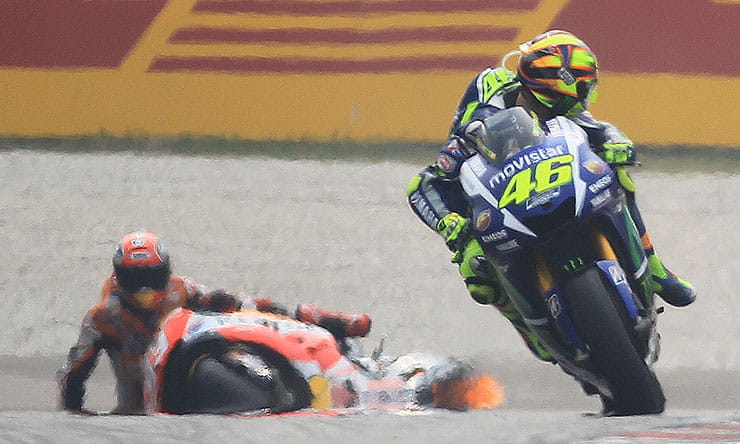