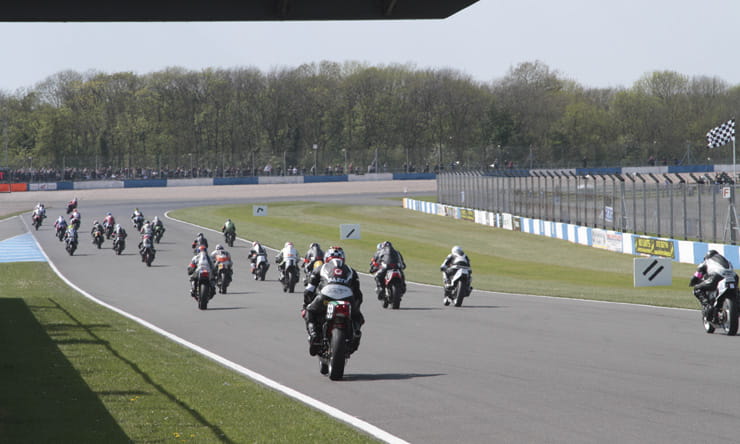 Last weekend the historic Donington Park circuit reverberated to the sound of classic endurance race bikes as 53 teams took to the track for a 4 hour race.

The 2017 Endurance Legends event had a bumper turn out of teams that included celebrity riders and guests such as Feddie Spencer, Trevor Nation, Steve Parrish and BikeSocial contributor Jamie Whitham. To bring you the most insight into an endurance event, BikeSocial sent our long time contributor, road tester and ex-endurance racer Roland Brown along, to soak up the sight, sounds and smells of the race.

Roland has raced at endurance races in the 80's and 90's, aboard Suzuki GSXR's and Honda VFR750R's (RC30's). This included one memorable race at the last World Endurance event at Donington 30 years ago. Roland crashed out of the race but managed to push the bike back to the pits for repairs and eventually a restart in the race!

They say nostalgia ain’t what it used to be, and that’s certainly true of motorcycling, judging by the scene at the weekend’s Endurance Legends meeting at Donington Park.
Not so long ago, classic biking was dominated by British bikes and black leather. But the leathers at Donington were as colourful as the bikes that dazzled with their variety – confirming that, for many riders, “classic” now means the stars of the Seventies, Eighties and early Nineties.

Out on track, the highlight of a varied race program was Sunday’s 4-Hour Endurance Legends race, won by the father-and-sons team of Neate Racing (pictured left), the reigning European Classic Endurance champions, on their immaculate Honda-powered Harris Magnum Mk1.

And there was just as much interest in the paddock, where the scene in every direction was like being transported back in time by a quarter of a century or more. In one direction was a group of slab-sided GSX-R750s, in another a gaggle of Honda RC30s. 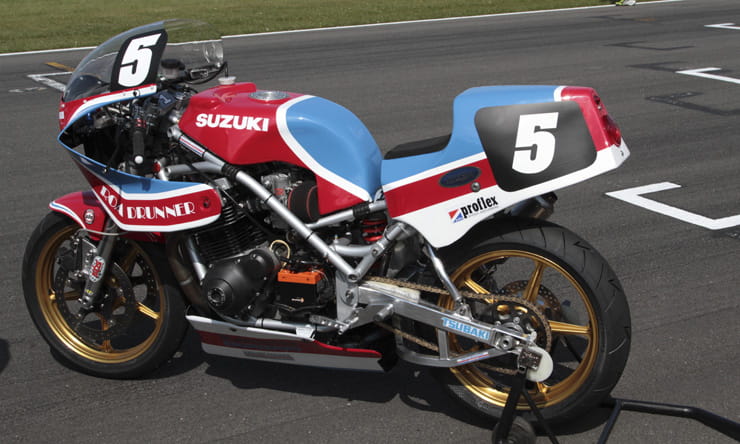 And you didn’t have to have raced both of those great sports bikes in the Eighties, as I did, to find plenty to get misty-eyed about. More than 50 organisations and owners’ groups had stands, displaying bikes ranging from Suzuki’s GT750 “Kettle” triple from the early Seventies, to – in the next-door display – Ducati’s Monster from the Nineties.

There were plenty of reminders that many of today’s riders grew up on two-strokes. A line of immaculate FS1-Es covered just about every colour of Yamaha’s legendary 49cc sports moped. Across the way, an equally colourful crackle of RD350s sat with paintwork and expansion chambers sparkling in the sunshine.

Just along from the Ducati 851/888 Owners’ Club stand were several examples of the Italian V-twin’s similarly classy and high-tech late-Eighties rival, the Honda RC30. Next to that, the Team Bike tent with several race-ready RC30s of its own.

Many of these new-generation classics were in action on the circuit, in a series of demonstrations and track sessions. Suzuki co-sponsored the event and had a big indoor display of bikes including ex-Sheene and Schwantz racers, and several vintages of GSX-R750 including a restored original model from 1985. 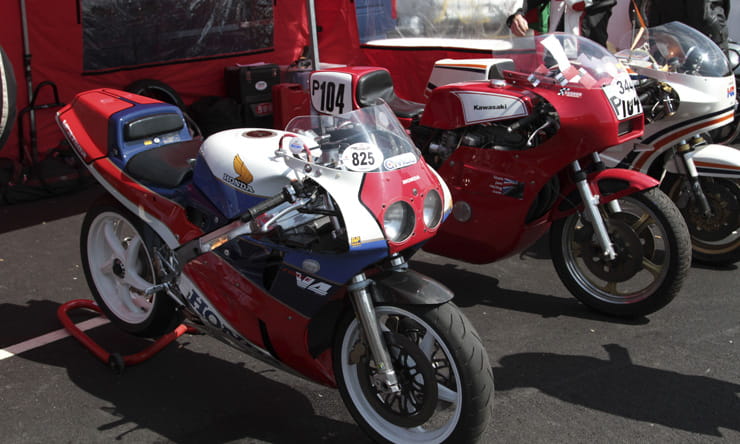 Owners of Suzuki’s TL1000S and TL1000R, celebrating the model’s 30th anniversary, had their own sessions on track; rarely can so many of the feisty if flawed V-twins have been seen together. Watching them head off round Redgate made me wish I still owned my old red TL1000S…

Instead I was treated to a blast on a very different bike – a 1919 Scott two-speed – at the Vintage Motor Cycle Club area at the Bennett’s Live Arena – essentially the Melbourne Loop part of the Donington track, which wasn’t being used for racing.

Here the VMCC was showing that old British bikes and black leather are also still very much part of the modern classic scene, by letting people pay £15 to ride a selection of bikes. These ranged from a Triumph T150 750cc triple from the late Sixties, via several Triumph Tiger 100 and T110 twins, to a 1927 Velocette KSS. 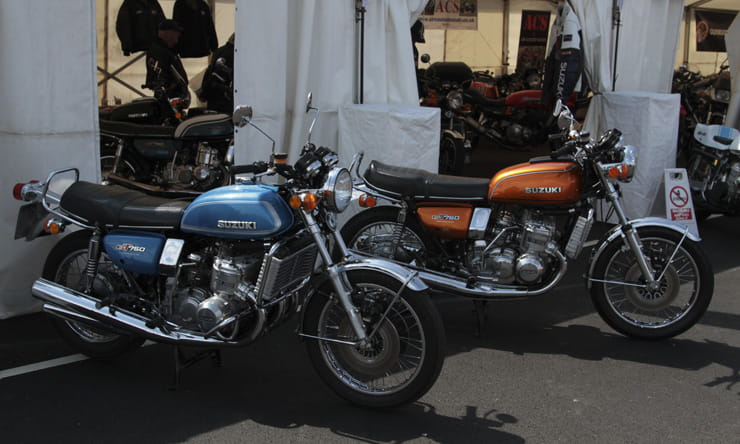 If I’d been braver I could also have been passenger in a racing sidecar outfit, for a similar £15 fee, as the chairs were taking turns with the classic solos. That looked exciting but I opted to stick to two wheels and hold the handlebars myself.

Oldest of the classic solos was the Scott, a lovely example of the famous Yorkshire-built two-stroke parallel twin. Needless to say it’s nothing like a modern bike to ride, so I needed plenty of instruction from VMCC members Len Page and Brian Southam before setting off.

There’s no twist-grip or clutch, for starters. Instead, the throttle is a lever on the right bar, alongside another lever for air mixture, which you move with it. On the left bar is the ignition advance-retard lever. The right-foot gearlever lets you press down with the ball of your foot for first, with your heel for second.

The left-foot brake pedal operates a belt on the rear wheel, which doesn’t give much stopping power, Brian warned. The right handlebar lever is for the front brake, which does even less. “The Scott’s fast – good for 50mph or more,” said Len, encouragingly. 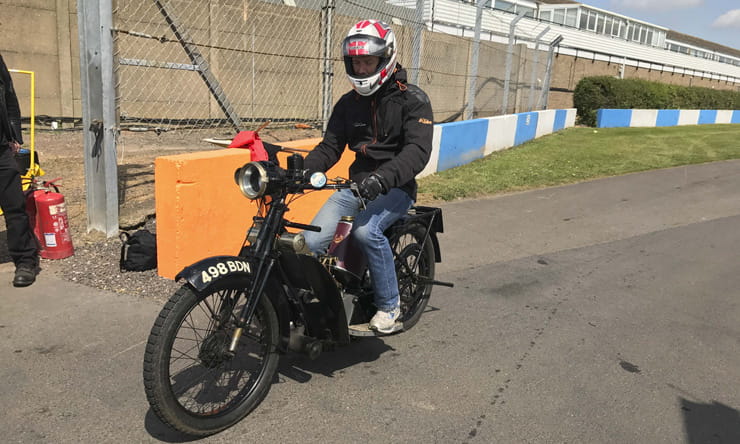 It was fantastic fun, too, once the two-stroke had fired up with a surprisingly loud yowl, and I’d headed out onto the circuit, where a few other riders were circulating on the Triumph twins. Once I got the hang of the throttle lever it wasn’t particularly hard to ride, though I had to keep my foot on the gear-lever to prevent the box jumping out of second.

I probably didn’t quite get to 50mph on the run down to the Melbourne hairpin, but the Scott seemed quite quick enough, and brilliant for a bike that was so close to its 100th birthday. Quick, light and successful in racing – Scott pioneered the kick-starter and foot-change gearbox, and won the Senior TT in 1912 and ’13 – the classy twin was the GSX-R750 of its day. 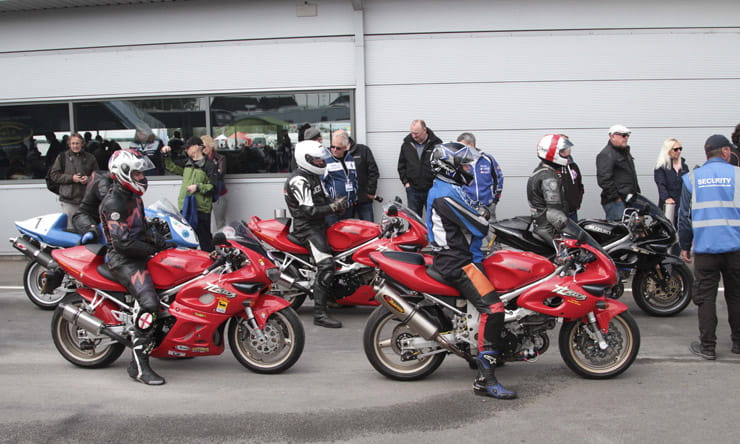 Back on the track, Suzuki provided arguably the highest-profile entrant in the Four-hour race, Team Classic Suzuki entering former factory stars Jamie Whitham and Steve Parrish, plus MCN tester Michael Neeves, on the blue-and-white GSX1100 Katana that was built during last year’s Motorcycle Live show at the NEC.

Bored-out to 1170cc, producing over 150bhp and featuring a much-modified chassis, the Katana qualified strongly and lined up for the Le Mans start near the front of the pack of almost 50 bikes that stretched along the pit straight. On pole was the No.59-plated Alf’s Endurance team of Michael Godfrey, “Spike” Edwards and John Barton on a 1982 Peckett and McNab Kawasaki 1170. 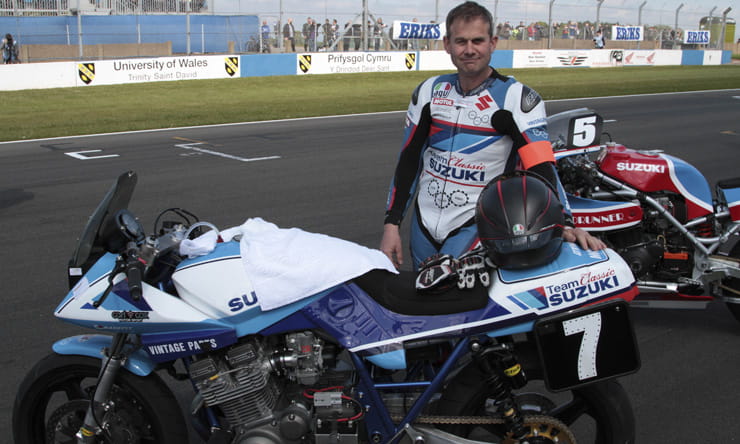 From the start it was the Belgians from Team Force, former European Classic Endurance champions, who took the lead on their Harris-framed GSX1100, with riders Bruno Le Bihan and the superbly named Gregory Fastre, ahead of one of the two classy P&M GSX1100s of Britain’s former multiple World Endurance champions Team Sweatshop Phase One.

But endurance is a cruel sport, as many of the leading contenders rediscovered with crashes and mechanical problems. Whitham crashed the Katana on the first lap, putting his team out; Godfrey lasted until mid-race before ending his team’s race in the Redgate gravel-trap. 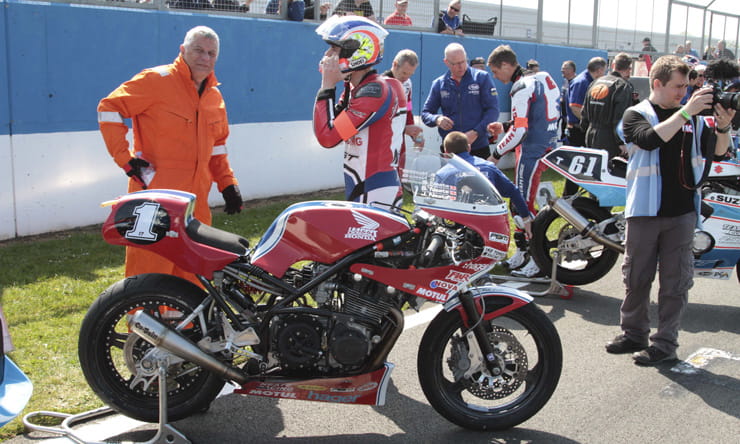 Team Force looked like potential winners before suffering mechanical problems and going out. Phase One also hit trouble, one of the team’s bikes stopping on the track before eventually being pushed over the line.

Meanwhile the No.1-plated Team Neate – dad John and sons Steven and Sam – lapped consistently fast. The team lost some time early on changing their Honda-engined bike’s battery, and had to ride the last session without third gear, but held on to win by four laps.

Behind them were Team Taurus, on their 1981 Suzuki XR69 replica, with Team SCERT third on a Harris XR69. Appropriately the trophies were presented by Freddie Spencer, an enduring Eighties legend himself. For the generation who grew up with Fast Freddie, the Donington weekend was just about as good as bike racing gets.