BLOG: Unwritten rules and getting involved in championship fights 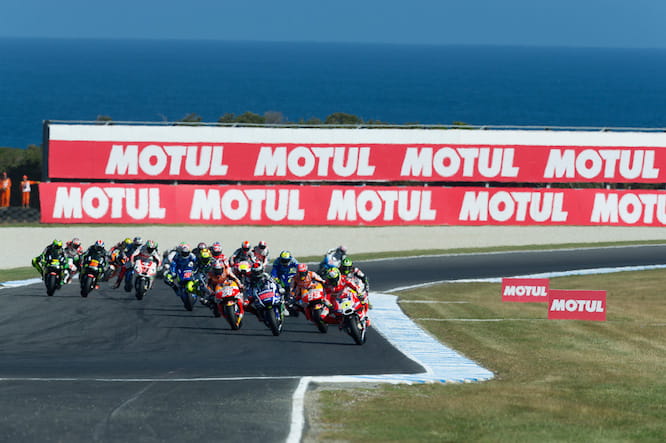 Since the incident in Sepang there’s been a lot of talk about unwritten rules in motorcycle racing.

Nobody who knows anything believes Rossi wasn’t to blame but speak to most riders in the Grand Prix paddock and they’ll acknowledge Marquez was pushing the Italian, perhaps harder than he needed to at that stage of the race.

This was recognised by race direction too: “Our opinion was that there was some fault on both sides,” explained Race Director Mike Webb. “But as far as the rulebook goes Marquez did not make any contact, did not break any rules as such, but we feel that his behaviour was causing problems to Rossi who reacted. Unfortunately, he reacted in a way that is against the rules.”

General consensus is that race direction were right, but what was Marquez doing wrong if he was at fault but not breaking the rules? Whether Marquez was intentionally trying to slow Rossi or not, and his lap times would perhaps suggest the latter, the battle actually slowed both riders and Pedrosa and Lorenzo were able to build a gap ahead.

While none of Marquez’ moves were illegal, they were aggressive and it could be said there is no need for such a level of aggression so early in a race. There is no rule to say you can’t be aggressive until the closing stages, but race officials across motorcycle racing championships have been known to be more lenient towards aggressive moves in the final stages of a race than they are similar moves earlier on.

The thing is, race direction decisions are subjective. There isn’t a book listing each scenario and detailing exactly how they should be dealt with. Race Direction has to be the most difficult job in racing, making such tough decisions, relatively quickly with the knowledge that whatever you decide there’ll be at least one party who isn’t happy. 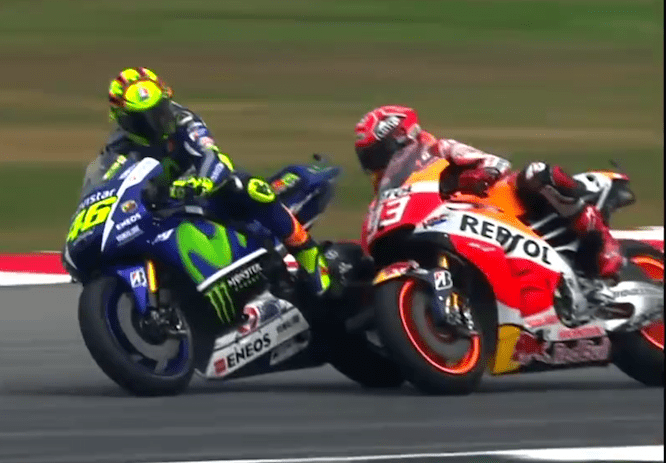 Following the incident in Sepang, British Superbike rider Michael Laverty tweeted about an ‘unwritten rule’ that Marquez broke in Sepang: “Marc broke the unwritten rule, always respect those fighting for a championship when you’re not. Vale got enraged and hung him out to dry.”

Over the past two weeks, there have been numerous requests from certain fans that riders not involved in the title fight should move over to allow Rossi to catch Lorenzo so there can be a ‘fair’ battle for the championship. As would be expected, this didn’t go down too well with the riders, who are keen to go out and fight their own race…

“I won’t be moving over for anybody,” Cal Crutchlow told us. “My team pay millions of euros to be here and out of respect to them I’ll try my best every race. I’m not pulling over for someone and that’s no disrespect to any other rider on the grid.”

Other riders have echoed this, much to the dismay of the fans making the requests. Anthony West posted a similar message to Crutchlow on Facebook earlier in the week but it was swiftly removed after the Australian came under fire from those certain fans.

Anyone who thinks a motorcycle racer will pull to one side and let another racer through is a moron. They are here to race, race until the bitter end and letting someone past them, under any circumstance (apart from giving back position following an illegal overtake), is simply not a done thing in this sport.

However, just because riders are saying they won’t move over to let Rossi through doesn’t mean they are going to deliberately interfere in the championship. 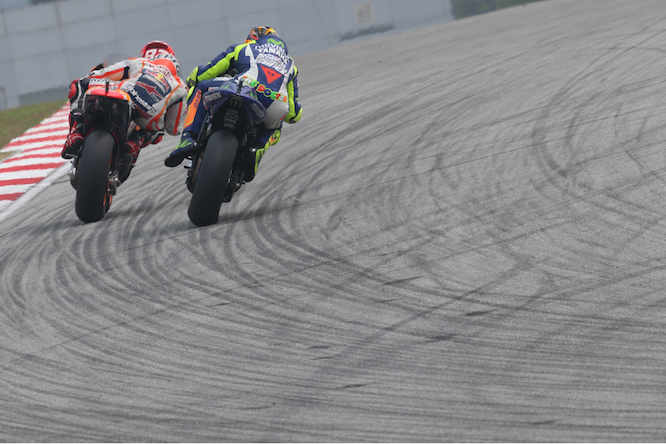 I think people have been asking the wrong question. Let’s go back to Michael Laverty’s tweet about the unwritten rule and how riders not in the championship fight shouldn’t involve themselves in that battle.

While nobody is going to pull over and allow Rossi through, once he’s past they might be a little more reluctant than usual to fight back at the Italian.

If you look at it with logic, there are ten or fifteen riders who simply won’t be able to fight back and Rossi should get past these guys with ease in the first two or three laps.

It’s the remaining factory (as opposed to open) bikes he could encounter difficulty with, the satellite Hondas and Yamahas, the Suzukis and the Ducatis.

Everyone knows that if Rossi is to take the title he needs to pull off one of the best races of his career and if that’s the case, he is likely to be faster than the likes of Crutchlow, Smith, Vinales etc, so if he passes them it could be within their interest not to fight back, but to try and follow him further up the pack in order to improve their own result.

“I see the time sheets. He’s a second faster, am I going to try to fight him?” said Nicky Hayden speaking on Saturday. “If I see a front wheel, I’m going to try and hook in behind him and hopefully when he passes the next guy, I can follow him through!” 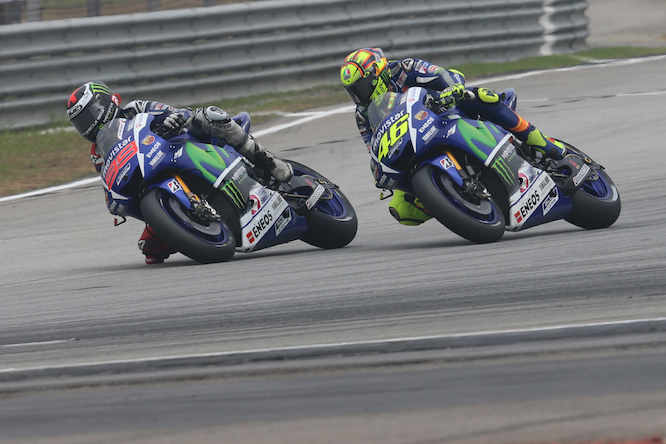 Is there an unwritten rule not to fight back when the guy is a second faster than you? Or is it just common sense to try and use their speed to get you further up the pack?

I believe the unwritten rule Michael Laverty refers to does exist. No rider wants to directly interfere with the championship fight and if placing themselves in a position where they are going to do that they’ll err on the side of caution but it depends on the situation.

Say, for example, Rossi wasn’t starting from the back of the grid and instead was alongside Lorenzo. If Marquez is behind them in the early stages, he is going to get involved because he wants to win the race and believes he can get ahead of both of them.

However, if Marquez was behind them on the last lap and thought he could only pass one of them, he might decide not to as his action would directly affect the championship result.

Fortunately for Marquez, it’s unlikely he’s going to find himself in this situation as Rossi shouldn’t be able to get anywhere near the two Spaniards, but riders further back in the field could find themselves in a similar situation.

If Lorenzo is third, and Valentino is sitting sixth – enough to take the championship – is a Cal Crutchlow or Bradley Smith figure going to overtake him on the final lap?

It’s not even because it’s Valentino Rossi, we’ve seen similar situations in other championships. When Tommy Hill and John Hopkins were scrapping it out for a second place that’d see them crowned British Superbike champion at Brands Hatch in 2011, James Ellison was on the tail of the duo but decided not to get involved and settle for fourth.

If the rider has nothing to lose by not getting involved they won’t, but if the extra points are going to see them clinch an improved championship position why shouldn’t they stick their nose in?

It’s anybody’s guess what will happen in Valencia today and whatever the outcome we’ll have a deserving champion, who has ridden well all year in one of the toughest and most exciting MotoGP seasons of all time.