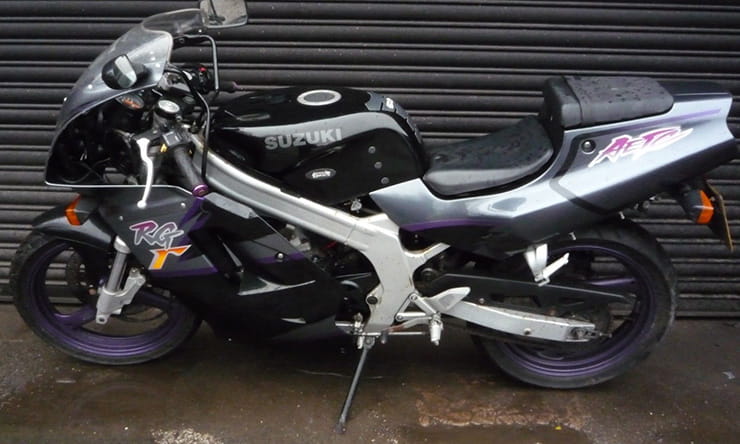 Manufacturers often create a tiddler for their range that mimics a larger capacity bike that’s part of their line up. Suzuki did pretty well with their original RG125 Gamma, it shared the same graphics, paintwork and looks of the iconic RG500. It also used the same 54mm x 54mm bore and stroke. Come the 1990s Suzuki had a new two stroke king, to cash in on the success of the their RGV250 they replaced the original RG125 with an all new, RGV250 inspired model.

At first glance it looked exactly like its bigger brother, look a little closer and you have to remind yourself that this was only a 125cc machine. The spec was really impressive, fat upside down forks and three spoke wheels were just half of the attractions. At its heart was a water cooled single cylinder that even had an electric start!

Being a learner motorcycle you won’t be too surprised to hear that most of these race rep 125s have had a hard life, so finding a good one can be a bit of a challenge. Prices for decent bikes are on the up, partly because they are a great bike in their own right, also because they make for a cheapish entry into classic two stroke ownership.

This 1994 bike is so nearly perfect, but like plenty of other bikes it comes with a tale. For the last decade it’s sat unused in a garage, over that time the keys have been lost. Our seller is punting it on in an ‘as is’ condition, although they have had it running. Finding a used lockset wouldn’t be a problem, or you could locate the key number from the ignition barrel and get a key cut, then hope that it fits the tank cap and seat lock.

The bike itself looks to be a honest machine, the standard paintwork even looks in good shape. Priced at £1,595 you could kick this RG125 straight and have it back on the road for under £2,000. 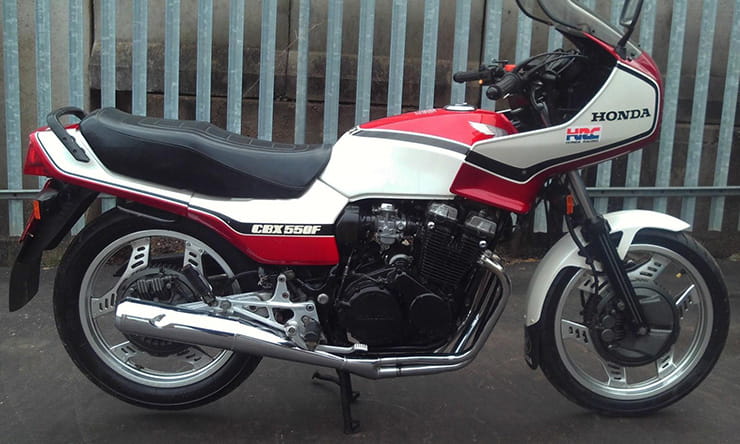 The 1980s saw many schools of thought on how motorcycle technology might progress, every manufacturer was at it with giving us answers for questions we hadn’t even asked. Honda are no strangers to taking something simple and making it over complicated.

The disc brake is a set up that most of us will agree is well proven. Honda took the equivalent of a cheese sandwich that was served on a white saucer and gave us a baked camembert baguette presented on a roof tile. Honda’s idea was to put the simple and effective disc brake and encase it in a drum!

It wasn’t just the Honda CBX550F that came blessed with this new fangled tech, Honda added it to there VF400F and VT250F too.

The Honda CBX550 was more than a bike with inboard discs. The air cooled 550cc inline four wasn’t without its issues, but find a good one and it will impress you with its abilities. This offering that we’ve found is pretty unique, since 1983 it’s only had one owner! In 35 years it’s amassed only 8,000 miles.

Other than a replacement Motad four into one exhaust it’s dead original.

Priced at £1,690 it’s the cheapest way into CBX ownership. 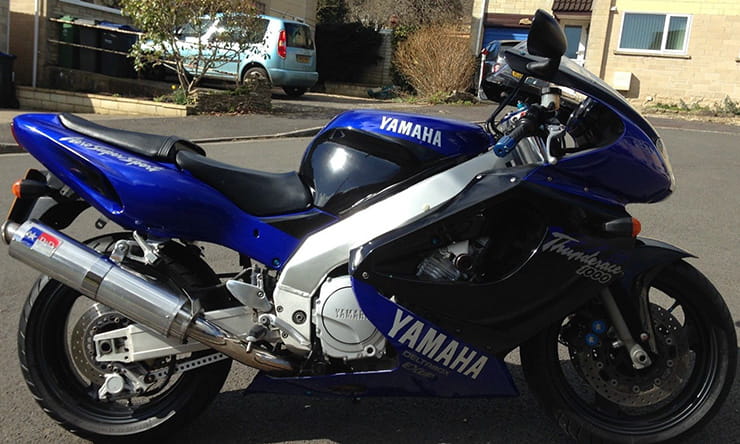 In 1998 Yamaha launched their groundbreaking R1, this did nothing to help their dealers shift the stacks of remaining Thunderace models in showrooms. The face lift FZR1000 EXUP wasn’t the big hit Yamaha had hoped it might have been. This means prices for the model have never been overly strong on the used market, there are signs that this might be about to change.

Under those Marmite looks lurks a decent motorcycle, the engine can trace its roots back to the FZR1000. Post 1998 Yamaha rebranded the Thunderace with a ‘sports tourer’ status, maybe that’s why sportsbike fans still fail to see its sporty credentials?

Having dipped to the £1,000 mark a few years back, prices are starting to creep up, with nice bikes now breaking the 2K barrier.

This one we’ve plucked from the internet looks dead straight, there’s even a period D&D alloy race can fitted. Other than a few minor cosmetic issues it’s in great shape for a twenty-year-old bike. The best bit is it’s only had two owners from new.

Anorak Fact: The Thunderace uses a five speed gearbox, a common conversion is to fit a YZF750 six speed gearbox.