Six accessories that add value to your bike. And six that don't... 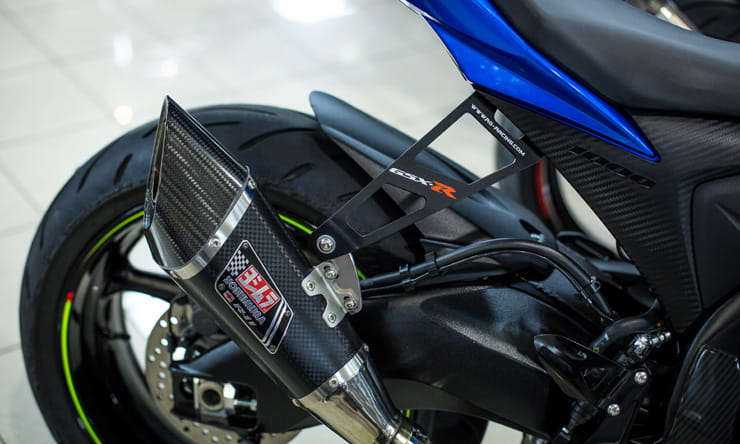 Still the number one item that we change. The days of swapping an end can and gaining 15bhp are long gone though. Modern exhausts are complex devices, bristling with Lambda sensors and butterfly valves helping manufacturers get the most performance and the cleanest emissions. Unfortunately, these amazing pieces of engineering are often huge and ugly (Suzuki’s current GSX-R1000 being the hugest and ugliest), meaning many of us rip off the pipe at the first opportunity and replace it with something prettier and lighter. In fact many bikes come with an official aftermarket option and occasional official promotions that include it in the price.

A top-brand aftermarket pipe or full system definitely adds value to a bike, but only if the original is present too (because you might need it for an MoT test). Don’t forget that your definition of not-that-noisy might be different to a prospective buyer and most full systems need the fuelling sorting to allow for the lack of restriction. Carbon fibre silencers look cool but crash badly and look tatty with age too.

To get the best from your new exhaust you’ll need a mapping module or ignition re-flash. In many cases these work well on a stock bike too because they overcome fuelling and ignition functions in the standard map to help pass emissions test. For example, some bikes run rich fuelling at the point where the noise test happens because a rich-running bike is quieter. There’s no visible evidence of this being done, so as a buyer, make sure you see the dyno graphs and as a seller, make sure you have a copy to show.

Making a bike for all sizes of rider and all types of riding style is impossible. So manufacturers have to compromise with suspension. Most of the time it’s ok, but every now and then a bike comes out that has the wrong spring for a particular market or damping too soft for how we’ll ride it. Yamaha’s original MT-09 and MT-07 are good examples of this and plenty have had their suspension tweaked by specialists.

The latest top spec bikes have semi-active (is that the same as lethargic?) suspension, where damping is controlled electronically and, here it’s hard to  modify without changing the whole system. Early versions of these systems  (BMW’s first generation ESA in the mid-2000s is a good example) were nowhere near as good as they are now and might actually make a bike worth less than the conventional version now.

Older bikes will often need their suspension replacing so, aftermarket fork kits and shock absorbers are definitely worth seeking out. Although be aware that on a sports bike it might also be a pointer (in conjunction with many other things) that the bike has been raced. 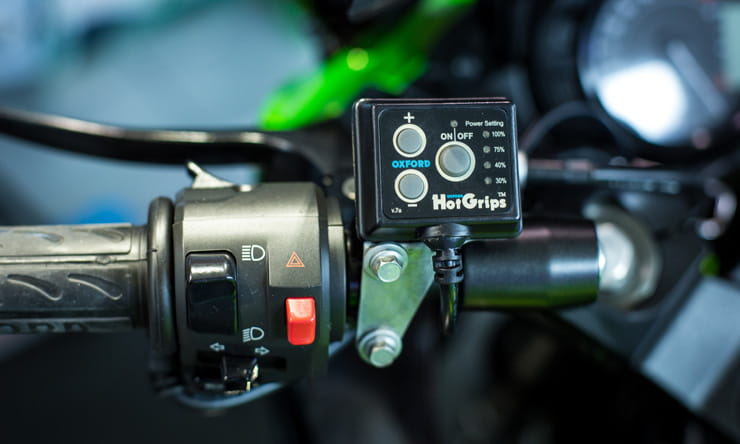 Like suspension, your bike’s screen was designed for an average rider. If that’s not you might find too much buffeting at high speed or problems for pillions. Or both.

Some bikes are worse than others, but in general, a taller aftermarket screen adds a small amount of value to a bike, as long as the original is available too.

The same goes for aftermarket seats or handlebars. Sometimes. If it’s for added comfort, then yes, as long as the standard ones are available. If it’s for cosmetic reasons, perhaps not, unless you also want some exactly the same and would have bought them anyway.

Factory fitted heated grips should be standard on every bike. Even in the summer, setting off at 6am with thin race gloves wrapped around lightly toasted handlebars is a pleasure. Some are better than others (BMW seem to be warmest and most reliable, Honda’s are not quite warm enough). 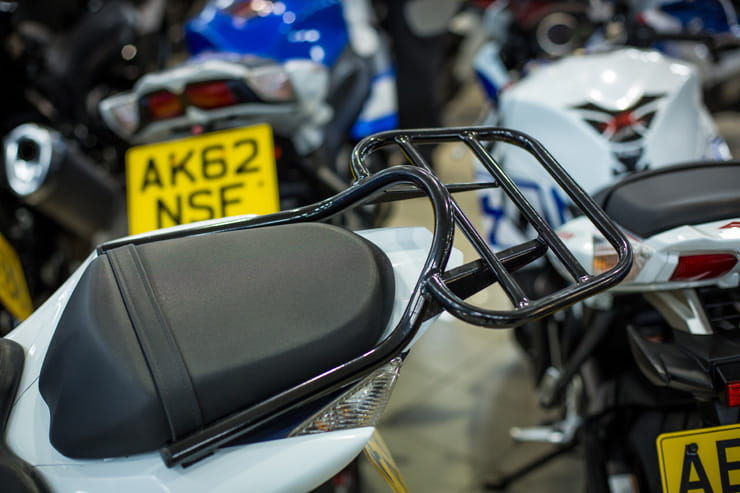 Unlike advances in electronics, the world of luggage is functionally the same as it ever was. The boxes are bigger and more stylish and mountings more secure, with plenty of factory options including central locking, but at the end of the day, they’re pretty much the same as they always were. Hard luggage is expensive but does add value. Or at the very least, make your bike more desirable. Soft luggage makes no odds – you’re better off selling it separately. 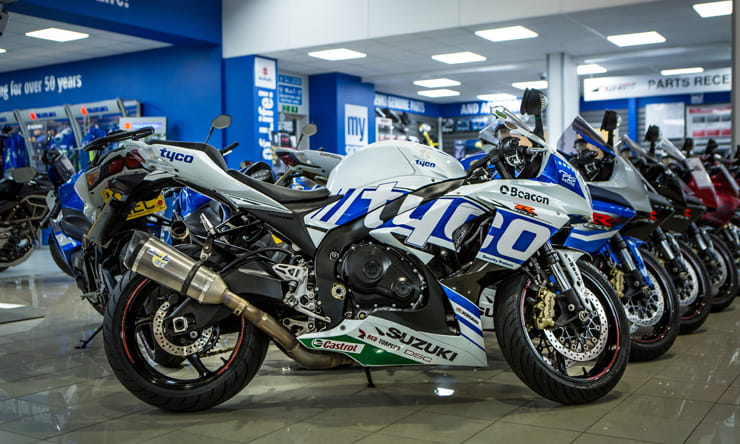 Now for the six things that wont help add value...

With a very few exceptions (mostly in the custom world), respraying a motorcycle will always make it worth less money. The reason is simple, because usually a re-sprayed bike has been in an accident.

And if you really want to lose pounds from the value of your otherwise standard bike might we recommend a one-off custom airbrushed mural. Naked ladies writing up a snake, anything a little too ‘Games Workshop’ or heavy metalflake.

The only exceptions to all the above might be a tasteful spray job on a mid-1990s race replica – when the Japanese apparently employed a golfing sweater designer to choose their colours. 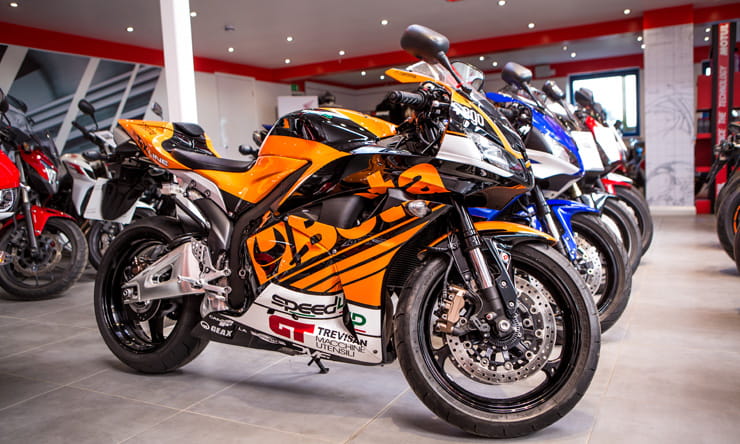 Polished alloy looks lovely, but to make those parts shine they usually need to be removed. And when a bike gets stripped as far as the frame and swing-arm it means one of two things

Largely, but not entirely a thing of the past. Engine bolts, screen bolts, number plate hanger, handlebar end-weights and banjo bolts for the brake lines.

One word. No. If for no other reason than some of the bolts on your bike are required to be torqued up higher than others and not all these aftermarket ones can take it. If you don’t know, then why take the risk?

Aftermarket heated grips are worth having, but check the wiring – it’s easy to do it badly, leaving a battery-draining, unreliable nightmare and, when one of them fails (which it will) you’ll be left with a single heated grip and one very cold hand? 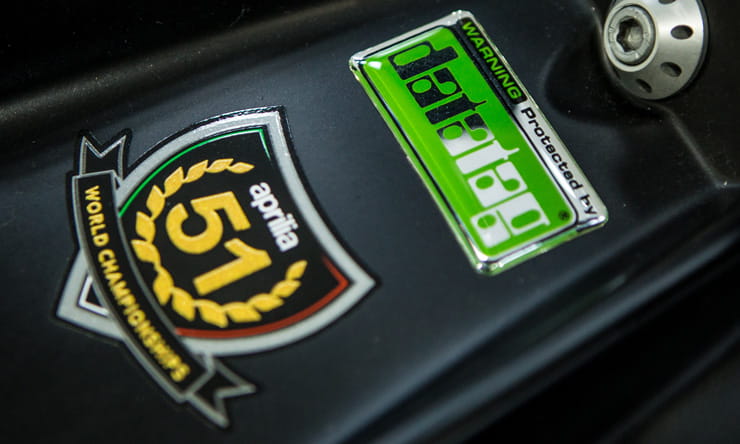 The fad that will not die. The purpose of an indicator is to not get splattered on a transit because they didn’t see you turning right. If anything, aftermarket indicators should be twice the size and double the brightness. We know people who will refuse to look at a bike no matter how cheap if it has them fitted.

Motorcycle alarms can be a good thing, if they are a modern unit that’s been fitted carefully by a trained installer who knows what they are doing. Trouble is, that a second hand one, fitted by someone you never met, a long time ago is the complete opposite. You have no idea who fitted it and when (not if) it will break.

Paying good money for a mechanic to untangle the wires and make your bike slightly less secure is painful. Physical deterrents like Datatag are worth having but add no value. A tracker likewise because you’ll be taking over the subscription on a unit that’s probably been superseded at least once already, so why pay extra?