The man in charge of the world's most dangerous race 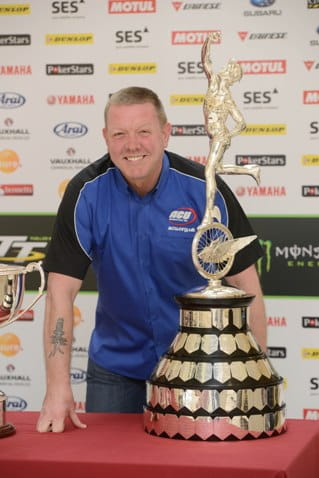 Not many people have the weatherman on their mobile’s ‘friends and family’ list.

But for the TT’s Clerk of the Course, Gary Thompson MBE BEM, weather is everything, especially on the Isle of Man.

And for two weeks of the year, Thompson is slave to the clouds and judge of the TT’s race schedule and safety.

But it’s not an easy job. Thompson has to liaise with riders and marshals, consult the Isle of Man Government’s Department of Infrastructure on the state of the course and, more importantly, make the final call on whether it’s safe to race.

In spite of these pressures, however, Thompson takes it in his stride.

“People ask about the pressure aspect but as soon as I get the information I focus on making the decision as early as possible so that riders are not kept hanging around. I don’t want it to be like the old days when there’d be a 30-minute delay followed by another 30-minute delay. My idea is to say ‘there will be no update until..’ and give it enough time. That’s a decision I make based on what the weather man says.”

One particularly tough decision Thompson had to make was during the 2012 TT, when he made the difficult call the cancel the Senior - the only time the TT’s blue ribband event had been quashed with the exception of the first and second world war and the foot and mouth outbreak.

He said: “At the time you don’t think about it. It was 2012 - my first year as Clerk of the Course - but I didn’t think about the fact the Senior had never been cancelled (apart from the world wars and foot and mouth outbreak).”

His decision-making didn’t allow for sentimentality. “I went out in the course inspection car with Milky Quayle, Phillip McCallen and Conor Cummins and it was absolutely abundantly clear that the stretch on the mountain was too risky. It wasn’t just wet, there were huge puddles. It came down to my decision but I knew as soon as we got in the car that it was just too dangerous.”

He said: “But that wasn’t pressure, to me it was just a case of rider safety.”

Part of the problem with the Senior and Superbike races is that the machines are too powerful for a treaded tyre. “Until a manufacturer comes up with a solution it will always be the case,” says Thompson. “I  suppose from their perspective it’s a one-event race and perhaps the tyre manufacturers can’t get the return on the investment.”

And while the TT is imminent, with practice starting today (Saturday), Thompson has been assessing the course since the 2014 TT finished.

“As soon as the TT’s over we have a debrief. With the course being on public roads open 365 days of the year there are always sections that need resurfacing and we always get comments from marshals about areas that need attention.”

To understand where the marshals are coming from, Thompson volunteers as one during the Classic TT and Manx Grand Prix. “It’s good to get to know the marshals better and also important to look at any areas highlighted as places of concern as it enables me to go and make an assessment.”

There are no major changes to the format of the course this year. The last serious adaptation was the significant widening of Brandish in 2007, which shaved lap times and arguably contributed to John McGuinness’ record-breaking average lap speed of 130mph in the same year.

That’s not to say, however, that Thompson isn’t making serious improvements.

“This year we have made some major changes to the pit lane procedure as there were fires in the pit lane during the 2014 TT. We have a new nozzle for every refuelling appliance and we’ve changed the way teams refill the pumps. They always used to top-up fuel fillers after the first pit stop to maintain pressure but that’s been stopped. Now they have to have enough fuel in the fuel fillers to last the two pitstops.”

It’s also mandatory that all pit crew wear fire retardant clothing, including fire retardant balaclavas. Indeed, it’s a far cry from the 1970s, when the principal equipment for any pit crew member was a cigarette. 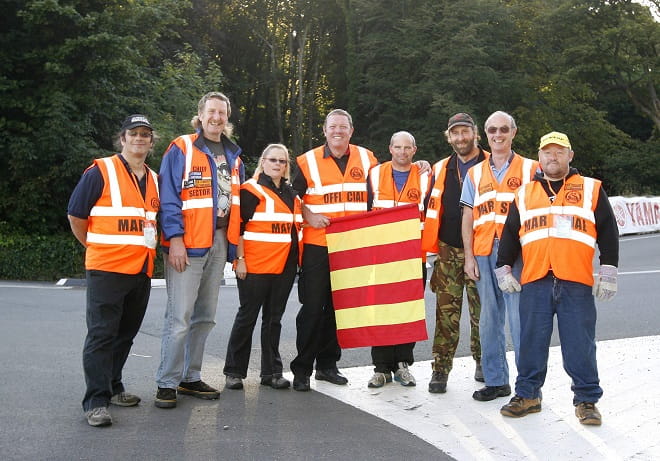 Thompson’s also involved in decisions about mountain course’s road surface, which varies across its 37 and three-quarter-mile stretch. “There’s shell grip on the mountain but at Creg Ny Baa they’ve used a type of tarmac that’s as grippy as shell grip but doesn’t lock in rain water, which is one of the cons of shell grip. The Creg is very fast as riders are coming down from Kate’s Cottage so it’s good to have a grippy surface there.”

As for keeping up to date with the ever-changing Manx weather, he said: “You have a pretty good idea the day before. I’m in constant touch with the weather station at Ronaldsway Airport - they’re almost on the ‘friends and family’ list on my mobile. The team at Ronaldsway are very accurate -  to the point of saying: ‘you may get a shower at Quarter Bridge..’, they can pin-point sections of the course.”

Thompson joined the ACU in 2002 after retiring from a successful career in the army, for which he was awarded an MBE and BEM. “I always loved bikes,” he said. “my dad used to take me to the Boston speedway events and ever since then I was hooked.”

His first TT was in 1978, Mike Hailwood’s comeback. “I can still recall vividly watching at Rhencullen, it was incredible.”

The TT is still close to his heart: “I can’t really put into words what the TT means to me.  It has become part of the soul, it’s not just a motorcycle race – it is much much more than that. There will come a day when I won’t be involved with the TT and I hope that day never comes.”

Gary Thompson, MBE BEM is the current Clerk of the Course for the Isle of Man TT Races and is currently on the island, ready for TT 2015.

If you were Clerk of the Course, would you make any changes to the TT?