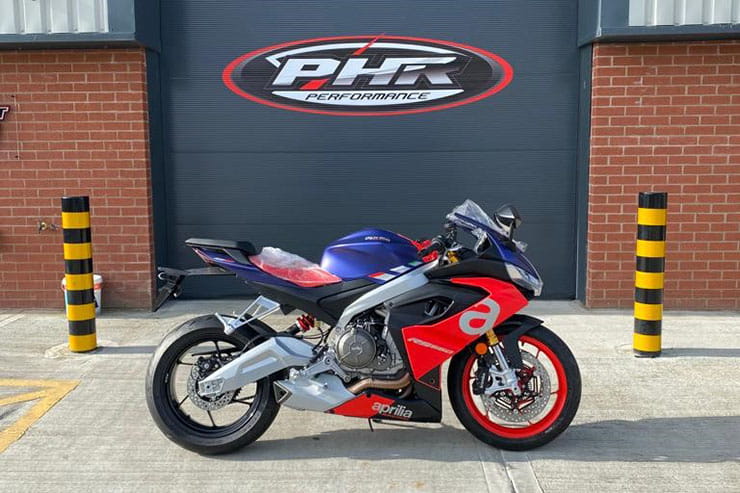 Peter Hickman has confirmed he has put plans to run his own Norton Superlight in the Bennetts Supertwins class of the 2022 Isle of Man TT on hold, choosing instead to ride an Aprilia RS 660.

Considered one of the big favourites for one or more victories in this year’s Isle of Man TT - the first to take place since 2019 due to COVID - lap record holder Hickman had planned to run Norton machinery in the Supertwins class alongside his Superbike/Superstock tilts on the FHO BMW M 1000 RR and the Triumph Street Triple 765 RS in the Supersport class.

The same machine he rode in the Supertwins class in 2019 with factory backing from Norton - under previous management before its near-collapse and rescue in February 2020 - Hickman invested in a series of upgrades with a view to racing it in 2022.

However, after TT organisers stipulated the machine - which is no longer produced by Norton - couldn’t be homologated without at least 30 examples of the motorcycle making production, Hickman was already having to improvise his plans.

Even so, while Hickman said he was prepared to make the models ‘to order’ in an effort to get around the regulation, he says this combined with the machine’s lack of test mileage made it more prudent to switch to a more proven Aprilia RS 660 package.

“I could run it at the North West but couldn’t at the TT, unless I produced or made available 30 for public sale, which I am still looking at some point because I have spent a lot of money and it seems daft not to race it. We have just come up short of time, there just wasn’t enough time to get everything sorted properly.

“Internally, if it was down to me, I’d still be racing it, but the guys weren’t confident about me racing it without riding it somewhere properly first. The best way of saying it is that it’s still a bit unfinished, so they just felt it wasn’t the right time to take it to a road race.

“We’ve ironed out a few problems that we had but they were a bit dubious about something already risky [in terms of regulations] and then taking something unproven.”

The Supertwins scenario is the latest frustration for Hickman following confirmation he won’t compete in the North West 200 Supersport class because his 765cc Triumph isn’t permitted to race.

The new model - an ex-British Supersport Championship machine - meets fresh regulations for the category being adopted globally in WorldSSP, MotoAmerica and even the TT.

However, while NW200 are allowing models bored out to 700cc, Hickman’s Triumph isn’t permitted even though he will compete against the same rivals at the TT two weeks’ later.

Having invested a substantial amount of money in taking on the Triumph, as well as develop his Norton only to purchase an Aprilia in its place, an out-of-pocket Hickman admits he is frustrated by what has become a disruptive build up to the events.

“If I was going to run a Kawasaki [in Supertwins] it would cost an absolute fortune, the rules are all ‘arse about face’ when it comes to the TT and North West anyway because the North West is running one set of rules, and the TT is completely different, which is a ridiculous situation.

“I spent £50k on two bikes and I am not allowed to use them but I can use them two weeks later in the same class. It’s just f***ing stupid.

Hickman only took delivery of his standard Aprilia RS660 on Wednesday while attending the Bennetts Track Day as part of his BikeSocial ambassador duties, meaning his PHR Performance team have their work cut out to prepare the bike in time for the North West 200 which starts this week on Thursday 11th May 2022.