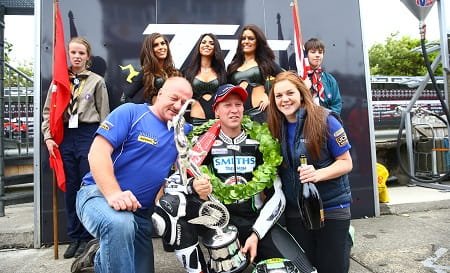 Gary Johnson bagged his second ever TT victory this afternoon in the first Monster Energy Supersport race, as he beat New Zealander Bruce Anstey to the win by 1.5 seconds.

Johnson’s victory, the first for Triumph in eleven years, came after a titanic battle with Anstey, with the pair swapping position on the timesheets lap after lap. Johnson lost a bit of time during his pit stop on the second lap but had regained the lead from Anstey by the first checkpoint on lap three

Rain started to fall on the final lap, meaning both riders aired on the side of caution and despite a strong charge from Anstey, Johnson crossed the line with a 1.5 second advantage to take his first victory around the 37.73 mile mountain course since 2011, and Triumph’s first since 2003.

“To take the win for Triumph first time out is what we were hoping for after some great practice sessions” said Johnson after the race.

“The bike has not missed a beat. We’ve put a new engine in and it’s a little bit stronger and that makes my job a little bit easier. I know we’re on a competitive machine and I’m against these fast guys so I wanted to get the hammer down a bit at the start. I had one of the best riders in front of me to chase after [Michael Dunlop – ed.] so I knew if I could get anywhere near Michael then I’d be in with a shout.

“I saw I was up two seconds and I actually thought it was to Michael and then as the gap came down, some other lads got in between us here and there and I got close to him and he let me past when he knew it was me behind him. Problem was, as soon as he let me past it started raining. I thought, ‘I do not want to be in this position’. We all know Michael, he can work hard in those conditions and make the tyres work for him and I was trying to let him go past me but he was there trying not to mess my race up and we ended up messing each other up a little bit.

“It’s a credit to the Smiths team and what they’ve done. We turned out at the North West for a bit of a taster and then came here, were quickest in practice and now we’ve won one!”

Johnson was set to take to the mountain course again this evening for the Royal London 360 Superstock race, although this was later postponed until Tuesday with bad weather closing in on the mountain.