John McGuinness: 'Guy Martin will be back' 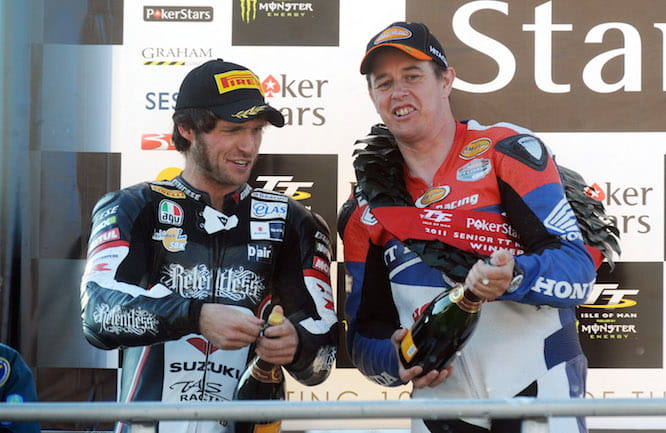 Isle of Man TT legend John McGuinness has said he thinks Guy Martin will return to the iconic mountain course in the future despite opting to sit out of racing this year.

Martin made the call to miss this year’s TT races in favour of competing in a gruelling mountain bike challenge, the Tour Divide, in America which begins as the 2016 TT draws to a close in June.

The TT star turned TV presenter will also miss the North West 200 and isn’t expected to race at all in 2016 with a new series of Channel 4’s ‘Speed with Guy Martin’ due to air in the summer.

Despite Martin turning his hand to other things, King of the Mountain John McGuinness believes he’ll be back in order to chase that elusive TT victory.

“It’s a pity Guy isn’t racing this year, but I suppose he’s got other things on his mind,” McGuinness told Bike Social at this week’s Isle of Man TT launch.

“I think he’ll be back though, people often have a year out, or even two years out. Mike Hailwood had 11 years out and came back and won. It could even make him stronger. There’ll just be more hype when he does come back as it’ll be another big story."

Martin has 15 TT podiums to his name but he’s never managed to stand on the top step, something McGuinness believes will be eating away at the Lincolnshireman, who has recently enjoyed success in a number of outlandish record attempts including becoming the fastest ever rider on a Wall of Death last month.

“He’ll come back, I know he will,” McGuinness continued. “He’s achieved all his records and the rest of the stuff he’s been doing but he’s not won a TT so that must be absolutely tearing him inside out. It’s got to be. He’s managed to achieve all his other records but this one has eluded him.”

Martin will take on a series of new speed records when the TV show returns to Channel 4 this summer and the Lincolnshireman is also set to attempt the motorcycle World Land Speed record with Triumph on television later this year.