Dunlop to test this week before making decision on future 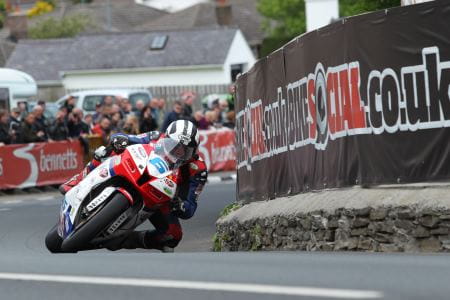 Towards the end of last year, seven-time TT winner, Michael Dunlop announced he’d be taking a break from racing after being unable to reach a deal for the 2014 season. However, that might be about to change... Dunlop reportedly announced at the Adelaide Motorcycle Awards on that he’d be testing this week and that he’d return should it feel right.

Riding for the Honda TT Legends squad last season, Dunlop stormed to four TT victories in a row, narrowly missing out on five as he was beaten by John McGuinness in the Senior.  Despite being offered a ride with Honda for the 2014 roads campaign, Dunlop reportedly turned this down.

Rumours then placed the Ballymoney man on a third Milwaukee Yamaha for Shaun Muir. These rumours died down when Muir’s team confirmed Josh Brookes and Ian Hutchinson, although doubt has since been cast on the team’s TT future after the withdrawal of Milwaukee as a sponsor.

The latest rumour places the twenty-four year old on a factory-supported BMW S 1000 RR and now he’s set to test ‘a bike’ before reaching a final decision on his future.

Northern Irish paper, The Newsletter reports Dunlop confirmed the test while speaking on Saturday night at the Adelaide Motorcycle Awards, at which he was named the IFS International and National Road Racer of the Year.

“If I’m going back racing everything has to be right - I want to be able to go and enjoy myself again” said Dunlop, who also finished runner-up to Eugene Laverty for the Irish Motorcyclist of the Year award.

“I’m testing a bike next week and if all goes right and I enjoy it then I’ll come back this year, but at this moment in time I won’t be racing.

“My goal was to win a Superbike race at the Isle of Man TT I did it last year. I knew it would be something that would eat me for the rest of my life if I never won a Superbike TT.

“I’ve been lucky because I have great sponsors in this game and I don’t think many people can say they have sponsors like I have - they’re the best ever and they’ve stuck by me through everything.”