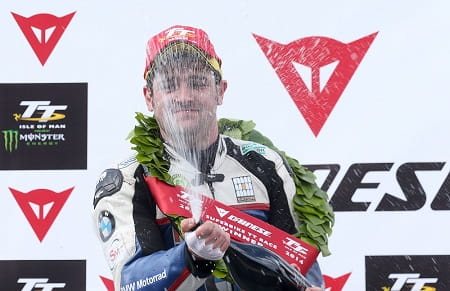 Michael Dunlop has hit back at those who criticised his decision to depart the Honda fold for this year’s Isle of Man TT races after taking victory in the first superbike race on the Island. The Ballymoney man left Neil Tuxworth’s outfit after a strong year in 2013 to join BMW Motorrad, who hadn’t won a TT race for seventy five years, until now.

Dunlop stormed to victory in the opening Superbike race of the 2014 Isle of Man TT, crossing the line some twenty seconds ahead of Suzuki’s Guy Martin. Controlling the race from the very first lap, the Ulsterman’s lead stretched to over 25 seconds at one point as he set two laps under John McGuinness’ lap record from 2014.

Dunlop turned heads earlier this week as he made a shock decision to switch tyre manufacturer in the middle of practice week, ditching Metzeler for Dunlop at the eleventh hour.

“We made a big decision this week in switching tyres and the Dunlop tyres worked a treat” said Dunlop after the race. “At the start I was a bit nervous but after a couple of laps I just plugged away, caught up with Guy [Martin] and it was nice to fight with him.”

“People thought I was mad leaving Honda and going to BMW on a bike which hasn’t been proven but I think we’ve proved it today! The bike is capable of doing what it needs to do, it’s a great package and I’m happy to be here. It’s seventy five years since BMW last won round here so that’s a nice present for the museum!” 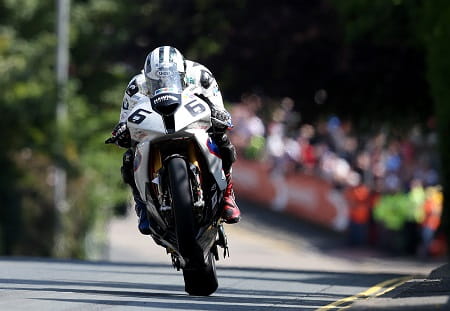 Dunlop raised a few eyebrows by not completing a two-lap run on the BMW S 1000 RR Superbike, but he said he had no doubts about the bike’s ability to put in more than one lap though having never raced the bike before, he does admit being slightly anxious about the full six lap distance.

“I had no doubts about the bike. The team worked well. The bike was working fantastic, I was a bit worried about doing six laps as it’s never done a race here but it was perfect. The boys were up all night working like dogs and fair play to them they’ve done a great job; it’s nice to have brought the BMW home in first place.”

“We had a small issue with the bike towards the end of the race that we’ll try and sort out and get it all up and running. We can’t get complacent; we’ve got another race on that bike and then another four more on others. We’ll have to get the beers in tonight and worry about the rest tomorrow!”

Dunlop won four races in a row at last year’s TT but emphasises the importance of not getting complacent ahead of his five remaining races.

“It’s a good start, I’m here to win races and to just win one race at the TT is incredible! We won that one but now we’ve got five more to go and not a lot to go from, we haven’t had a lot of time on the BMW.”

Dunlop will be back out on Monday in both the Supersport and Superstock races, ahead of Wednesday’s second Supersport race and both the Lightweight and Senior TTs on Friday.