Triumph Daytona 765; will they or won’t they? 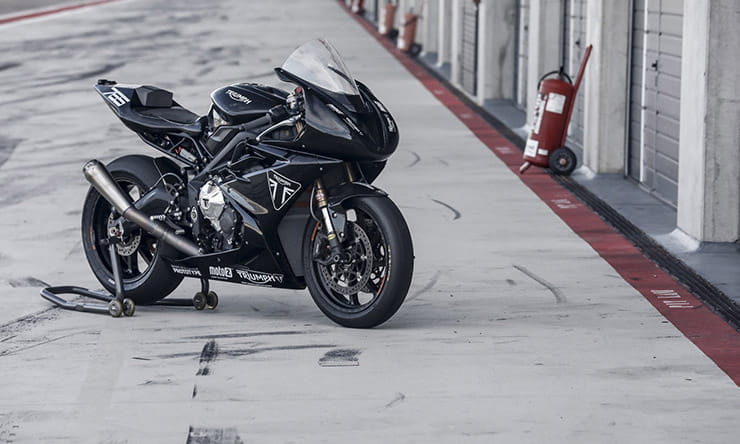 Cast an eye over Triumph’s current model range and a couple of things are instantly clear. First, it’s am azing how up-to-date the majority of its models are. Second, the Daytona 675 sticks out as a machine that’s fallen behind its brethren in terms of tech.

While most manufacturers have a handful of older models still on sale, virtually everything in a Triumph showroom now has been launched or received a major overhaul within the last two years. The ever-expanding line of Bonneville-derived ‘Modern Classics’, the Speed Triple, the Street Triple 765, now the Tiger 800 and Tiger 1200; they’re all new bikes. Even the 1050cc Tiger Sport was revamped as recently as the 2016 model year.

The only remaining old hands are the Rocket III, the Thunderbird range, the Scrambler, the Sprint GT and the Trophy SE. And, of course, the Daytona 675.

Of those, the Thunderbirds were homologated to meet Euro4 emissions rules in 2016, and the range was revamped only a handful of years ago in 2014. The Scrambler – Triumph’s last remaining model with the old air-cooled Bonnie engine – is surely set to be replaced with a 1200cc Scrambler to sit alongside the water-cooled, 900cc Street Scrambler. The Rocket III and Sprint GT may well be entering their final year of production in 2018. The Trophy SE would be easily revised to meet the latest emissions rules by slotting in the newly-updated version of the 1215cc triple from the 2018 Tiger 1200.

Like so many of its rivals, including Honda’s CBR600RR, Suzuki’s GSX-R600 and Kawasaki’s ZX-6R, the Daytona doesn’t meet the latest European type-approval standards. It’s currently sold, like those competitors, under end-of-series regulations that let manufacturers clear out stocks of non-compliant machines. But the period of grace expires on December 31, 2018. 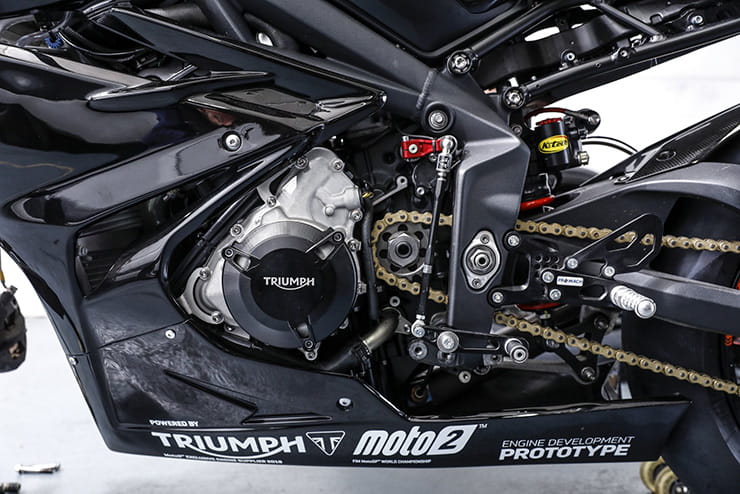 If Triumph is to have a sports bike come 2019, it needs to revamp or replace the Daytona.

We asked Triumph about its plans for the Daytona but it comes as no surprise to hear that the official line – as with all the company’s future model plans – was a firm ‘No comment.’ Despite that, though, evidence is building to suggest that a new machine is in the pipeline.

Most significantly, perhaps, is the fact that just last month Triumph set in motion trademark applications in both the USA and Europe to give it rights over the name ‘Triumph Daytona’. Incredibly, despite selling Daytonas ever since the four-cylinder Daytona 1200 appeared in 1991, Triumph hasn’t guarded its international rights to the name. Indeed, for much of the 1990s, Moto Guzzi also sold a ‘Daytona’ model.

So why, just as the Daytona 675 is facing its final curtain, is there the sudden interest in protecting its name? It is circumstantial evidence, but even a trademark application represents an investment that would surely be pointless if there weren’t at least vague ideas of a new Daytona in the future. 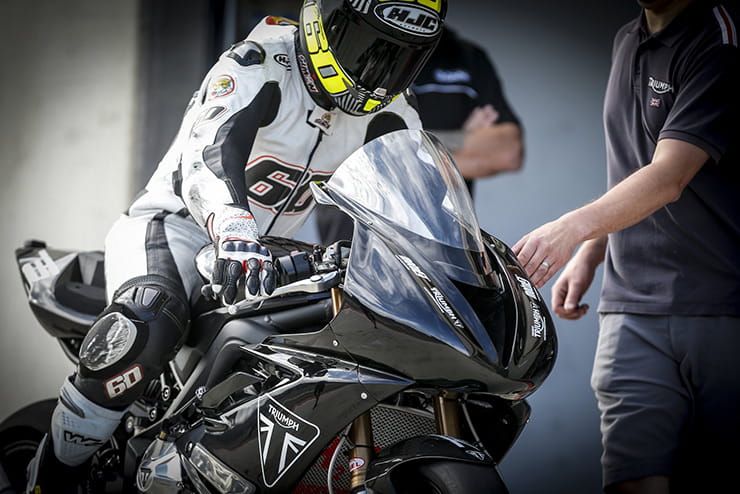 More compelling, perhaps, is the fact that Triumph already has the building blocks for the bike. For Honda to create a new CBR600RR, it would need to develop a new Euro4-compliant engine, at vast expense. The same applies to Suzuki and Kawasaki’s rivals. But Triumph has already put the investment into creating the upsized 765cc triple used in the latest Street Triple. Developing 122bhp in high-spec ‘RS’ form, the engine is already ripe for middleweight sports bike use.

Similarly, the hugely successful Street Triple was, originally, little more than a Daytona that had been stripped of its fairing. So does a new Daytona road bike need to be much more than a faired Street Triple? The naked bike already has great handling, good suspension components and a high level of electrickery to call upon. In R&D terms, a new Daytona, which would be entering a market from which rival middleweight sports bikes have all but disappeared, need not be a hugely expensive project. Sure, it wouldn’t be race-legal at the Street Triple’s 765cc capacity, but Triumph has little care for such things.

That brings us to the next point in favour of a new Daytona: Triumph’s entry to the world of MotoGP as the official Moto2 engine supplier in 2019.

Honda’s exit as the championship’s engine supplier makes sense. From 2019 it won’t be able to sell the CBR600RR in Europe. Many other nations also adopt the same emissions rules, too, and the result will surely be the end of the bike’s production. Continuing to prove the race-worthiness of its engine in Moto2 would be illogical.

Flip that argument around, and what does Triumph gain from its Moto2 involvement? Yes, Moto2 will provide a publicity platform, but with the Daytona gone there will be no way for the people attracted to Triumph’s racing exploits to convert their interest into a representative machine in their garage. Will Moto2 sell more Bonnevilles? It seems unlikely. 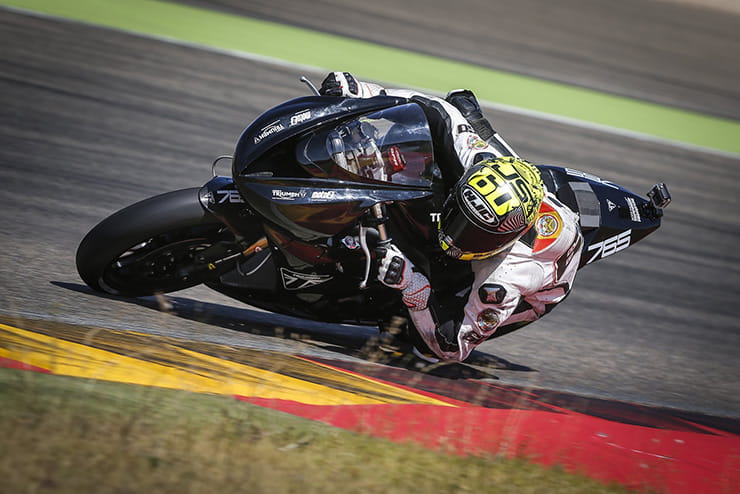 Despite the growing body of evidence that suggests a new Daytona must be on the cards for 2019, a couple of simple facts still work against the idea. And the most damning is simply the disastrous sales figures for middleweight sports bikes. At its peak in the UK, around 200 Daytona 675s were sold in each quarter. Recently that’s been as many as have sold in a whole year, and the figures are dropping. In the first quarter of 2017, only 19 new Daytonas were registered. The figure for the 2nd quarter of 2017 – the most recent on record – was just 14 bikes.

While the UK is by no means Triumph’s only market, it’s an important one in sports bike terms and it seems riders have simply fallen out of love with the format. While many will clamour for a new Daytona, how many of those voices will die away when it comes to actually putting a deposit down?

There’s a chicken-and-egg dilemma here. Are Daytona sales dropping simply because it’s getting old? Would a new model reinvigorate the middleweight market? It’s been a few years since anyone has made a marked effort but Yamaha sold about 130 of its revised 2017 R6s in the second quarter of 2017, and it wasn’t even in dealers at the start of that period. Triumph’s bean-counters are certain to be keeping a close eye on how the Yamaha’s sales perform over the next few months.

Meanwhile, the firm’s R&D team has bigger fish to fry, in particular the recently-announced smaller bikes – around 500cc – that it will be developing hand-in-hand with Indian partner Bajaj. Those might not have the tingle of excitement that a new Daytona might bring, but in terms of sales volume and establishing Triumph’s security – and its financial freedom to indulge in things like sports bikes in the future – they’re much more important.

It’s also worth noting that the initial plan for the Street Triple 765 was to include a half-faired ‘RT’ version above the RS in the range. Our understanding was that it was intended as a semi-replacement for the Daytona. The fact that it hasn’t emerged could be an additional sign that the Daytona has been given a reprieve.