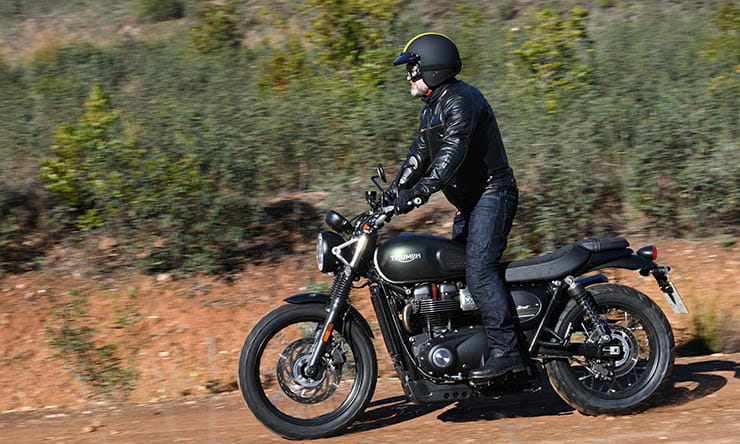 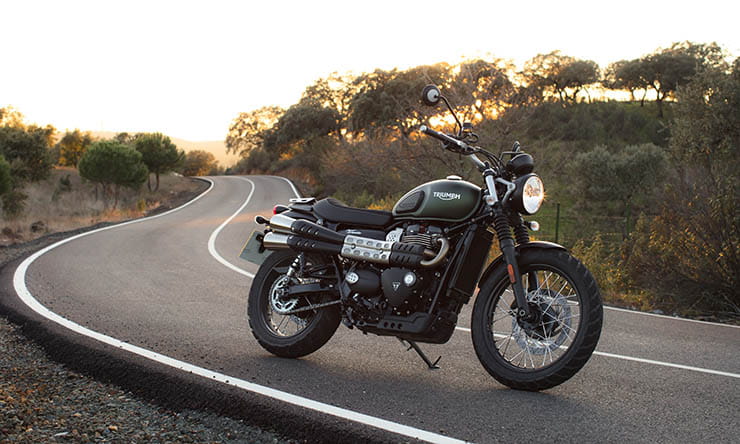 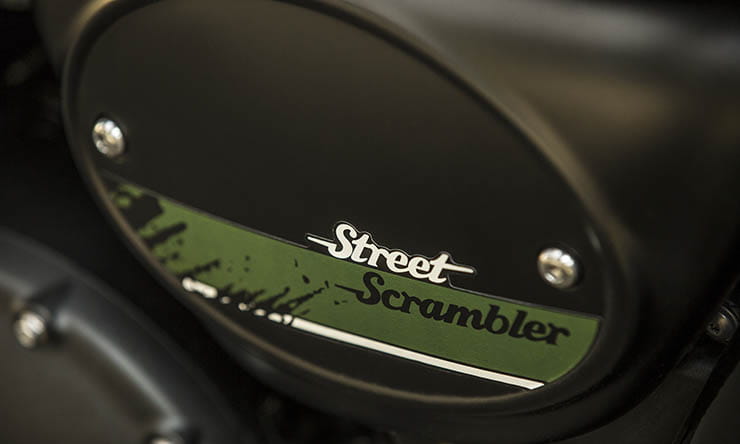 It’s easy to forget that it was Triumph, not Ducati, who invented the concept of the retro Scrambler.

The British company’s Steve McQueen-inspired Scrambler of 2006 was one of its most popular models for many years and now, after a one year sabbatical, comes a new version. Ladies and gentlemen, meet the 2017 Triumph Street Scrambler.

Triumph says that it aimed to make the Street Scrambler an improvement on the decade old design in every way possible. Surely, with the advances in technology, that was never going to be the toughest challenge that they’d undertaken but, even so, I was curious to see how the new bike would perform.

Plenty will disagree but, you see, me and the old Scrambler never really got on all that well. It looked as cool as Fonzie, granted, but otherwise I found it heavy, cumbersome and downright unpleasant to ride. The brakes were weak, the gearbox appalling and that high level exhaust...? Well, unless you want some second degree burns on your right thigh, let’s not even go there. Really, don’t go there…

Unlike the old model, whose roots could be traced back to the original Hinckley Bonnevilles of 2000, the Street Scrambler is based on the 900cc Street Twin that was launched last year.

The parallel twin engine is more or less identical. It delivers the same 54bhp and 80Nm as the Street Twin and Street Cup, which is also new for 2017, but Triumph say that the ECU tune is slightly different due to the exhaust system. It’s got a high level, twin pipe, design that's similar to the burny, burny ones from the original Scrambler, and there are plenty of chassis changes that make the Street Scrambler more than just a cosmetic makeover of the Street Twin.

Most obvious is the adoption of spoked wheels, 19” at the front and 17” at the rear. These come wrapped in Metzeler’s dual purpose Tourance rubber and are combined with longer suspension fore and aft to give a rugged stance and a nod to some off-road capability. 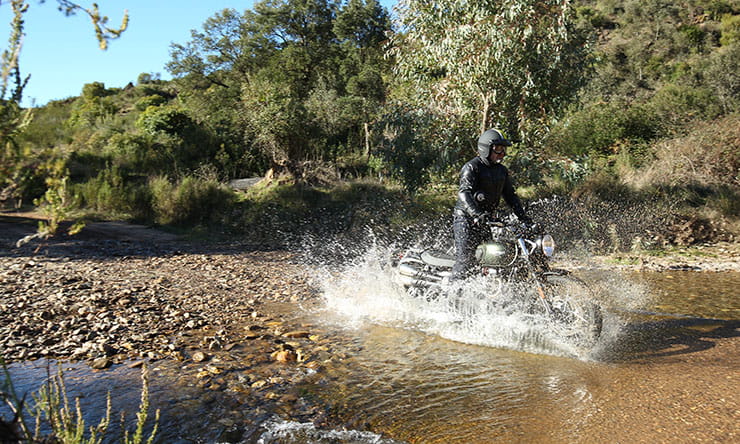 So while the Street Scrambler is more ‘street’ than ‘scrambler’ Triumph laid on a short off-road course when we rode the bike at its international press launch in and around Seville earlier today. Gentle it may have been, but the bike coped well enough considering its weight (200kg), its suspension travel (120mm) and its road-biased tyres. You probably won’t buy the Street Scrambler as an enduro bike, but if you have the desire to rip up and down farm tracks every now and again, it sure is better than a Fireblade!

In my opinion, the natural habitat for the Street Scrambler is the city and flowing open roads.

In town, that taller suspension, upright riding position and wide bars make it a fun and formidable weapon. Hit the open roads and the Street Scrambler is perfectly happy slaloming through the sweeping roads around Spanish city of Seville. Those same wide bars give plenty of leverage as you carve through the corners, it's good fun and really composed for a bike fitted with dual purpose tyres. I found it to be an extremely relaxing ride that's best enjoyed at sensible speeds. Sure, it wouldn’t be my first choice for motorway work but, overall, I was pleasantly surprised by the way the Street Scrambler stops, goes and steers.

It has to be said that Ducati’s interpretation of the scrambler is a much more raw and visceral experience. The Triumph may be heavier and less powerful, but it’s also more thoughtful, more British and more refined in its approach. The Italian bike is also cheaper to buy.

The engineering on the Street Scrambler is from the top drawer and the detailing superb. From the modern Triumph branded headlight to the lovingly crafted two piece seat, the Triumph oozes class and makes a case for justifying the £9000 price tag. Where Triumph could have raided the parts bin and saved a few quid, they’ve gone down the route of tooling bespoke parts for the Street Scrambler because it’s the right thing to do, for example with the detachable rear foot peg hangers and a modified frame, developed especially for the Scrambler version.

I also like the thoughtful way that the modern tech has been incorporated into the classic design. The engine is liquid cooled and full of sensors, but I love how Triumph’s engineers have found a way to package it all up and retain that classic heritage look. Nowhere is this more apparent than in the location of the catalytic converter, which has been hidden away so neatly between an exhaust heat shield and the engine block that you’d never know it even exists.

When I first saw this bike on its launch at the Milan show, I particularly liked the two piece seat. Ok, so the pillion pad offers little more than a passing reference to the fact that you’d want to take a passenger but it can be easily removed and interchanged with the useful aluminium rack that also comes as standard. It’s neat touches like this that really make the Triumph stand out from the others in the scrambler set. Incidentally, if you want a more traditional style bench seat, Triumph do one as an accessory. In total, there are some 150 bolt on bits to help personalise your bike, including a Vance and Hines exhaust system, Fox rear shocks and a bunch of cosmetic parts to make the bike even more ‘rugged’. 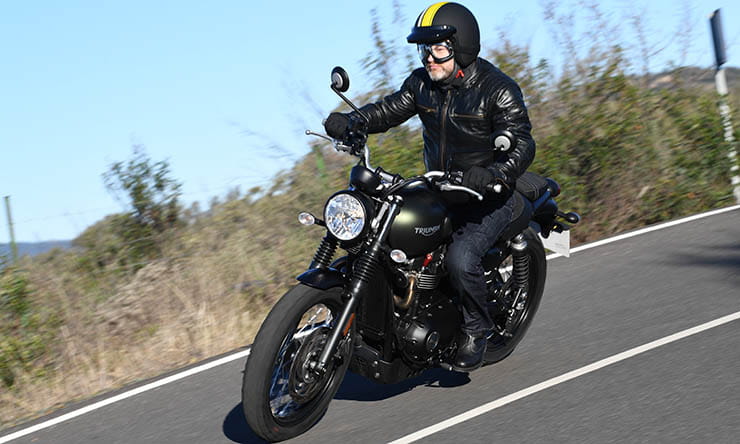 I didn’t think that it would be the case, but the Street Scrambler is definitely my favourite of the three bikes in the Street Twin family. The motor, which is perhaps a little underpowered in the other two variants, feels right at home here, and the quality is spot on.

For new riders, or those getting back into bikes, the Street Scrambler can be the perfect companion with which to start your motorcycling adventures. An A2 licence friendly version will also be available by spring. With a 792mm seat height, and a narrow waist line, most riders will be able to get both feet on the ground. It really is just so easy and relaxing to ride.

More experienced riders can also enjoy the charms of the Street Scrambler, although speed freaks and those looking to ride long distances will probably get bored easily. Ducati's 800cc Scramblers are quicker, cheaper and, dare I say it, a bit more fun. Overall though, Triumph have achieved what they set out to do with this, namely to create a successor to their popular Scrambler that is better in every way.

They’ve achieved that, and then some. What's more, that sweet sounding exhaust won’t have you anywhere near the burns unit.

The Triumph Street Scrambler is in dealerships from mid-February priced £8900 for the black version. Green and red options are also available for an additional £125 and £300 respectively.

With thanks to photo maestros Alessio Barbanti and Matteo Cavadini for the images. 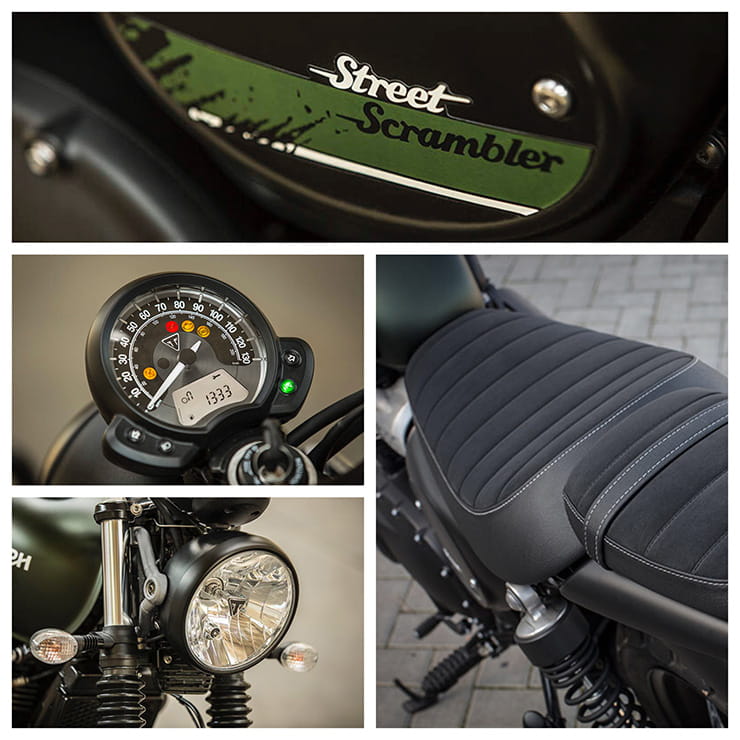