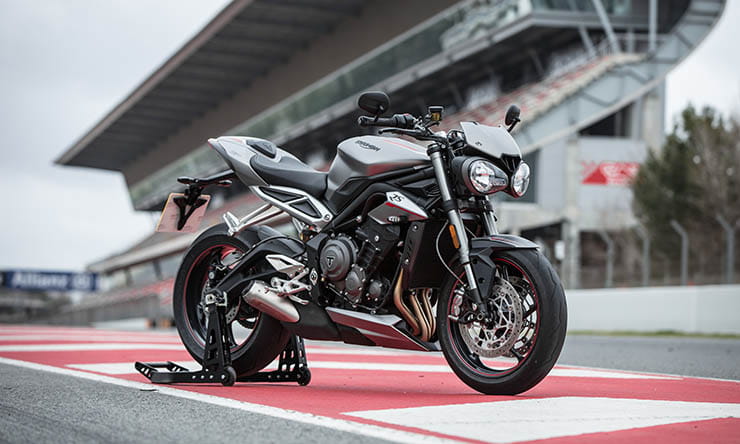 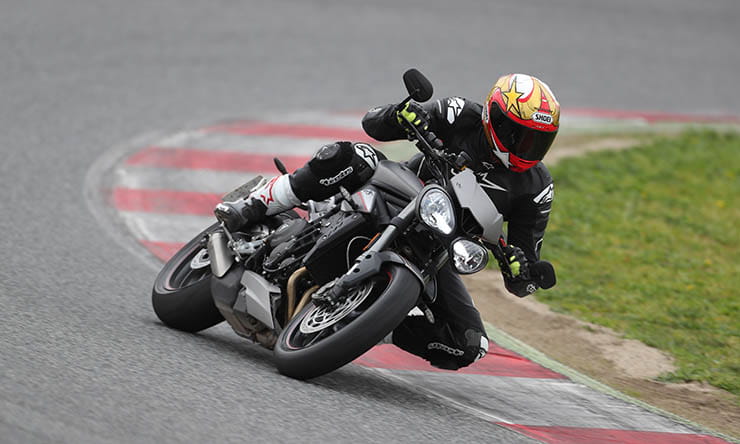 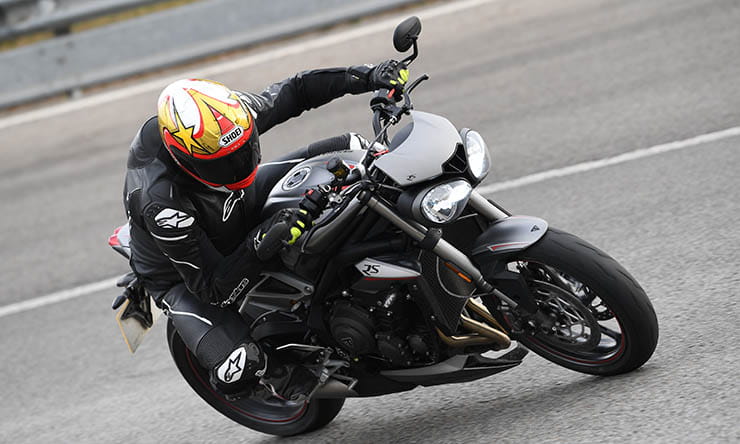 Call me cynical. I'm a journalist after all, but I'm not one for believing the hype or being sucked in to a marketing message led by a manufacturer. When Triumph claimed the new Street Triple 765 was a game changer in its marketing parade, I sniggered. Surely it's just a new Street Triple I thought? And nothing wrong with that. But a game changer? I'll eat my words...

It has a phenomenal motor. In the RS version we tested today, it makes 121bhp, more power than you ever need on the road, and has an accurate and lightweight chassis perfect for British roads. Yes, we're testing it in Spain, but today has seen a mix of bumpy, greasy roads, motorways, A-roads, soaking wet backroads and long straights, just like the UK but on the wrong side of the road. With an epic soundtrack from its three-cylinder 765cc Triumph Daytona 675-derived motor, a chassis to shame most supersport bikes and top-end and mid-range grunt to leave a full-blown Supersport 600 race replica for dead, Triumph's Street Triple 765 RS really is the greatest Street Triple yet.

But is this new Street Triple a game changer? Hmm, well after 130 km or so on the road, I can honestly say that while the new RS may not take things onto a completely new level, it is one of the finest motorcycles I've ridden in years.

That's quite a statement, I know, but this is one hell of a bike. There are a massive 80 changes to the bike from the old 675 Daytona-based engine alone and although it looks pretty similar to the old 675cc Street Triple at first glance, when you look deeper it's pretty much all new. It can do track too, but we'll come to that later.

In terms of the basic frame, the chassis may be the same as the outgoing Street Triple but all the bodywork, the flyscreen, headlights and that new banana swingarm, which is designed to improve the action of the rear suspension and aid grip on corner exit, are all new. Also new is the much trumpeted five-inch full-colour dash, new switchgear with a joystick controller with which to scroll through the myriad of settings. There's sharper geometry with a 0.5 degree steeper head angle and 4-5mm more trail. As David Lopez, the lead test development rider says: "The bike is faster so it needs to be stable at speed."

But that extra stability is offset by a taller ride height on the Ohlins rear shock.

Those headlights copy the style of the bigger Speed Triple, and the whole bike has a hunched down look and feels more up-to-date. The R and RS come with LED daytime running lights too, giving it a distinctive look when you see one on the road.

In the RS spec we tested it means 121bhp from the breathed-on motor, and makes a max torque of 77Nm at 10,800rpm. That's a massive 13% more torque than the outgoing 675. The entry-level bike, the Street Triple S comes in at 111bhp, the Street Triple R makes 116bhp. But today we only got to ride the RS, which is the first version to hit showrooms, so we'll focus on that. Over last year's bike, the standard motor gets new crank, new cams, pistons, con rods, Nikasil coated barrels and liners, a new exhaust and intakes. 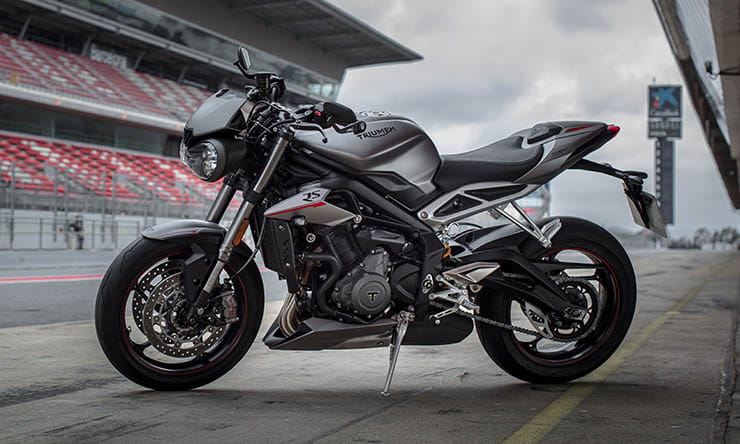 While the R gets a new cam, the RS gets further tweaks with ECU changes and a different cam profile. All bikes also get a shorter first and second gear, as well as a revised air intake and an exhaust that saves 1.7kg in weight. The bike weighs an impressive 166kg dry, 2kg lighter than the old 675.

In the RS spec we tested the bike comes with a fully-adjustable Ohlins rear shock, fully-adjustable Showa 41mm front forks and shares its the sporty seat unit and seat cowl with the R. That means a seat height of 825mm.

It feels narrow, but not stupidly so, and although the seat is fairly tall smaller riders should cope. I'm six foot four and never felt uncomfortable on the bike.

Climb onboard and you're faced with a big colour screen that puts Triumph up there with the best in terms of how easy it is to scroll between the different riding modes – Rain, Road, Sport and Rider, plus an individual mode where you can set the bike how you like. There's even a span and ratio adjustable Brembo master cylinder.

On the road I spent most of the time in Sport or Race. There's not much difference between the two but the top-spec map gives a more aggressive fuel map, and changes the ABS and traction control settings down for a bit more fun.

In rain mode the traction and ABS is turned up to full. In road mode the bike will wheelie off a corner before the anti-wheelie interrupts and calmly brings the front-end of the bike down. It's not savage, just a gentle interaction.

The clocks include three different displays which move the digital speedo and dash around the screen depending on preference. In the home button setting, where you can fine tune the bike further, there are more displays to choose from. I preferred setting one, personally. 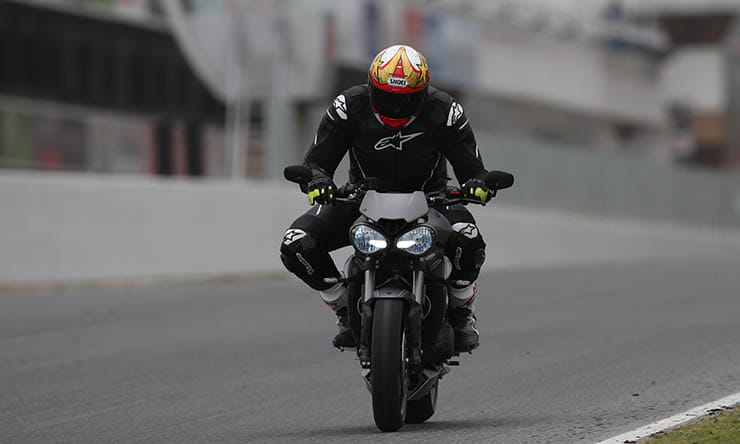 But aside from the bling of the full colour screen, this bike is all about that outstanding motor. It's friendly and easy to ride slowly, has perfect fuelling, is gentle on the throttle at low speeds in any mode and has so much mid-range and torque. It pulls in third or fourth gear from 3000 rpm up but get it at 6000rpm and the bike comes alive, pulls stronger, gives a unique triple roar that I am amazed can get through Euro4 regulations. Then it pulls harder and harder up to 11,700rpm, where it is making maximum power, and when the clocks glow red and tell you to shift before the limiter comes in. Between corners it will over rev and you can use the slick quickshifter to haul through the gearbox. It's great fun revving it out then using the engine braking to help you line up for the next bend, but most of the time the bike is happy in its mid-range. It has way more stomp than the old bike, and a lot more top-end rush too.

The 1050 Speed Triple may make a claimed 138bhp and weigh in at 182kg in R form, but the smaller Street Triple RS is way more exciting, spins up through the revs faster, sounds better, handles better, and is easier to ride for newer riders. I like the Speed Triple a lot, but I love the Street Triple 765. Triumph say the 1050 and the 765 have a different customer base, but the bikes are definitely getting closer, in my opinion.

That new 765cc motor means that making progress is easy in any gear, it likes to rev bit you don't need to rev it. Combine it with the RS's Ohlins rear shock and Showa front forks and this is one hell of a rapid road bike, way more so than its claimed 121bhp may suggest.

It covers ground quickly thanks to its relatively softly sprung shock and forks. They're never too soft, though, just about right for all-round riding and more than capable of faster stuff. Want the stiffer? Just get the screwdrivers out. The quality of the damping front and rear is immense and Triumph say that new banana swingarm helps the bike and the pressure on the rear shock when under power.

There's Pirelli Diablo SuperCorsa SP tyres front and rear which are well suited to the bike's sporty nature. There's nothing you can do on those tyres front and rear to upset them, unless it's really wet, while the Brembo M50 front calipers gives loads of power and a lot of feel at the fully-adjustable lever too. The only thing I'd say is that ABS can cut in a bit too early when you're really going for it in track mode, but it's barely noticeable unless riding like a TT rider. Which just so happens to be what we did occasionally, as we had TT legend Gary Johnson riding with us on the press launch.

For the rest of the time the brakes are superb, the traction control on the road is barely noticeable but get hamfisted in the wet and it cuts the power before it gets too lairy and sideways. On the down changes the new slipper clutch means you can be aggressive and get away without locking the rear.

The whole bike is so fluid and so well balanced that it instantly makes you feel at home. I saw 135mph while cranked over in bumpy sweepers and it was ultra-stable.

On the road it will cruise comfortably at 80mph without fighting the wind too much, and I had a rucksack on during road riding, which created extra bulk and buffeting.

You might not think of it as a specific track weapon, but riding the Street Triple RS around Catalunya's MotoGP circuit showed that it is more than up to a track day. It would easily hang with supersport bikes.

The brakes are sublime on track with so much feel even from 140+mph with the ABS turned off. The tyres are unstickable and where you'd think a bike with 'only 121bhp' would get lost on track, it feels right at home. I turned the ABS off as it came in a bit too early when stopping from an indicated 144mph at the end of the straight, when it was just shy of the rev limiter in top. With everything turned off it was flickable, controllable and rapid, even if occasionally ground clearance mean the right peg touched down, but it was never a worry.

Overall Triumph have taken the Street Triple and, in the RS at least, they've made it into a track-ready road bike that's one of the best bikes to come out of Hinckley in years. It makes you wonder why you'd ever want more. Yes, £9900 is a lot of money but there's nothing else like the RS with this level of kit for the price. 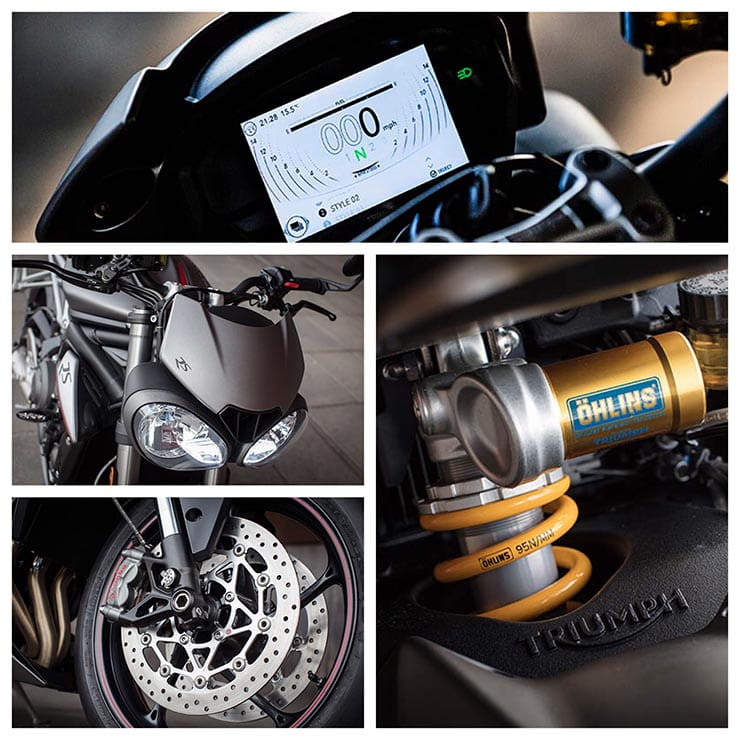