When the original model was launched way back in 2007, Triumph’s Tiger Sport defined a sports adventure genre of motorcycling. Some would argue it influenced manufacturers to produce bigger, brasher, more expensive adventure bikes with armfuls of power and gadgets but the Triumph has remained true to its own roots. While its own Tiger 800 and Explorer ranges have developed with their own capabilities and target rider in mind, the 2016 version of the popular Tiger Sport comes with a host of mechanical and aesthetic changes to make it more sporty, economical and, above all, better to ride. 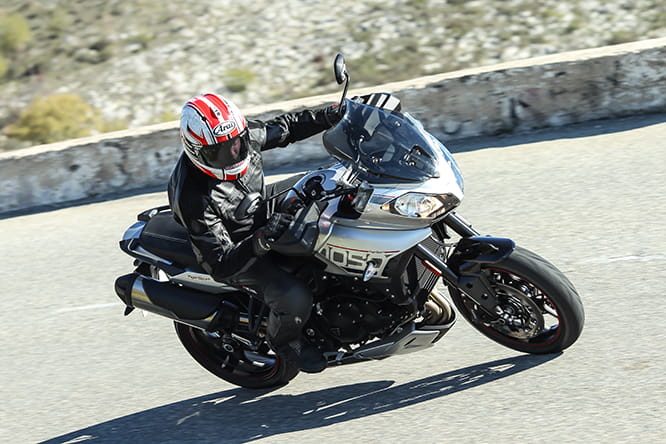 Bike Social was invited to the press launch taking place around the stunningly scenic roads north of Nice in the South of France where we covered some 120 miles of varied road surfaces and a mixture of fast, sweepy, open roads and tighter, twisty hairpins. All of which were designed to demonstrate the bike’s agility and performance to mark off the sports side of its character…and name. The Tiger Sport is a versatile creature which has been designed as a one-bike-fits-all for those who only have the space/budget/time/lifestyle for just one two-wheeler. A bike that will be equally as good at commuting or dashing to the shops as it would be riding the length and breadth of the UK laden with luggage and/or a pillion. Add in the performance, comfort, economy, build-quality and rider gadgets, all of which the Triumph has in abundance, and the Tiger Sport starts making serious sense. And with a price tag of £10,300 the competition (that Triumph has named specifically) had better start raising their game.

Let’s start with the glorious three-cylinder, 1050cc, liquid-cooled motor which shares its ‘development path’ with the new Speed Triple. We of course refer to the same 104 component updates as the naked sportster for this year, including a new ECU, alternator, ride by wire throttle, cylinder head, injectors and piston design to name but a few. All of which have made both bikes far smoother than their predecessors.

A new silencer and header system not only meet strict new Euro 4 emission and noise regulations but they enhance the glorious, pitchy rasp from the triple. A three-cylinder at full chat is a cracking sound, almost worthy of removing ear plugs for. Almost.

Three riding modes (Rain, Road and Sport) adjust the throttle mapping and traction control settings; Rain restricts power to around 98 bhp and has its own traction setting while Sport and Road share one and differ only with throttle responsiveness.

Other rider enhancements include a new adjustable screen, standard fit adventure hand guards, cruise control, self cancelling indicators, a USB and a 12v power socket, ABS and a whole load of detail treats. More about those later. 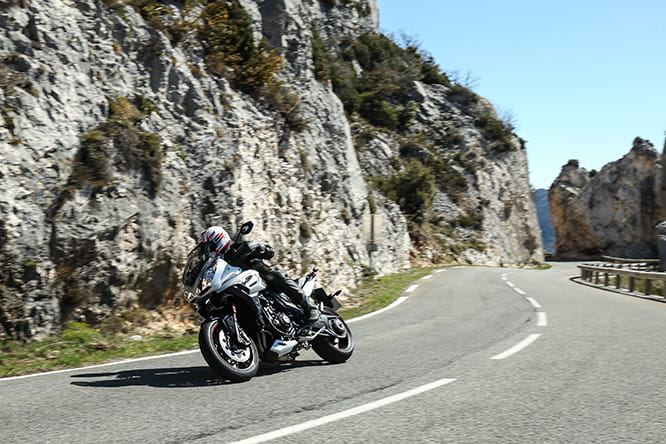 The ride is rewardingly easy with an immediate throttle response and no statchiness in any of the three riding modes. The triple’s character is naturally lively and alert with a beautifully progressive delivery of power, underlined by the fuller, smoother torque curve which reaches its peak of 78.2 ft-lbs (106 Nm) at 7000rpm. Whip the throttle back and the revs climb quickly but calmly, pushing you on with an extra shove between 6-7000rpm before petering out at the 10,000rpm limiter. The bike is geared longer than the Speed Triple and 70mph is easily achieved toward the top of second gear. Therefore, Triumph’s claims of enhanced economy (by 8% over the outgoing model) begin to ring true because cruising around in 6th gear means the revs are low and the mpg is high. Overall, Triumph’s specific test conditions returned an economy of 54mpg while on the ‘spirited’ press launch I managed a respectable 47.5mpg and on that basis, a finger in the air calculation would suggest difficulty in achieving less than 42mpg even if riding like a loony. A full 20 litre tank of fuel should return in excess of 180 miles.

The gear shift is precise and clean enough although a quick-shift, even as an option, would be on my checklist for the next version/update. It’s the way forward. Notching into each gear is made easier with the lighter, springy clutch action with a bite point close to the middle of the full lever release. The Tiger Sport has plenty of pulling power through 3rd and 4th gear, enough to drive nicely out of the corners and also for the overtakes.

The classy, practical and enjoyable Tiger Sport has a roomy and comfortable, if not a little sporty for a touring bike, riding position. The seat height hasn’t changed from the previous model and even though its very accessible and easy for a 6-footer like me to flat foot, there is a low seat option available which shaves 20mm of the 830mm seat height. From the hips up the stance is more upright with the raised handlebars making the stretch to the controls pleasantly comfortable while your legs are tucked under in a sportier position, not a fully cramped tuck but enough to work in conjunction with the ground clearance so you’re not scraping the foot pegs at every corner.

In those corners, the Triumph feels very well balanced. A healthy combination of chassis geometry, classy Showa forks, cast aluminium wheels, Pirelli Angel ST tyres and sharp ABS-powered, Nissin-calipered 320mm twin disc brakes offer the feeling of agility not usually associated with a bike with this weight, height or wheelbase. The front brake lever has been mechanically enhanced to offer the same performance but with less force while the adjustable front (preload, rebound and compression) and rear (preload and rebound) suspension has a certain athleticism about it. Remember this is a sports adventure bike and is not built for track days yet in fully standard, out-of-the-box setting the rear didn’t squat and wasn’t too bouncy on the exit of a fast corner, for example. The front didn’t wallow around either. It meant I had to readjust my natural riding brain into more of an attack mode. The tyres are grippy and precise leaving me to worry about making progress around the fabulous French roads and taking in the scenery. 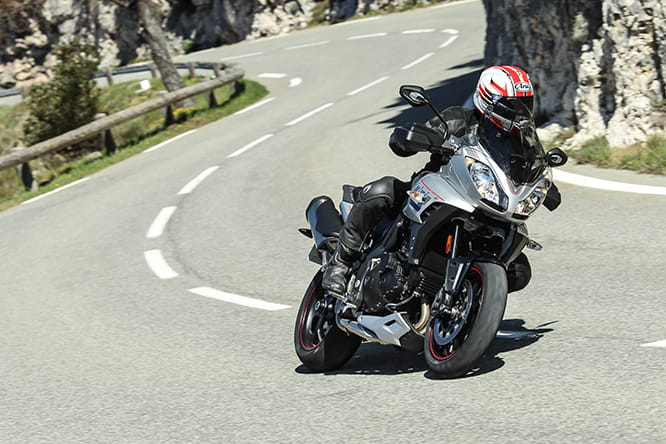 Triumph say their rivals for the Tiger Sport in the Sports/Adventure market in terms of power, weight or price are the Kawasaki Versys, Suzuki V-Strom and Aprilia Caponord but I believe the Yamaha MT-09 Tracer and Honda VFR800X Crossrunner should be considered so I’ve included them in this brief head-to-head table:

*None of these machines are in the same league as the BMW S1000XR or Ducati Multistrada in terms of electronics and raw power. The BMW, for example, it is equipped with a monstrous 160bhp but it also has a starting price tag of £12,450. 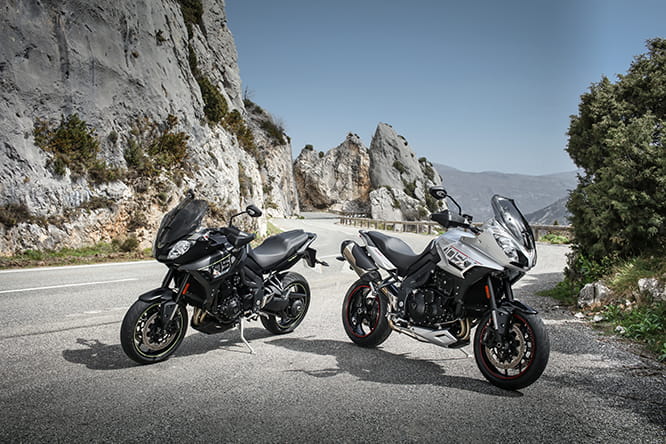 Triumph have increased the number of rider aids and their quality. Adventure-style hand guards are now fitted as standard and are large enough to offer a good deal of protection, as does the new, tinted screen. It’s adjustable through 55mm and by one-hand even when riding. To raise it, simply grab the top of the screen push it gently away and pull upwards. It’ll then spring back into one of the five slots. Coupled with the aero diffusers on either side and there’s plenty of wind protection available for a comfortable ride.

Traction control has two settings which are integrated into the three riding modes. I didn’t find it over intrusive but it didn’t kerb a little fun now and again. It can be turned off but only when stationary but switch the ignition off and the bike will reset into a default ON position. Cruise Control has been updated and is fitted as standard on the 2016 model. Improving on the existing system on the Tiger 800 range, there is no longer an old-school on/off toggle switch. Operationally, it reacts quickly to increase of decrease inputs.

Self-cancelling indicators are superfluous in my book but the Tiger Sport has them as a switchable option via the instrument panel if required. If so, they will self-cancel after either 65 metres or 8 seconds after activation.

What is more useful is the 12v power socket situated on the left side of the frame where a sat-nav or heated jacket can be pugged in, as well as an underseat USB port for charging electronic devices, for example.

The range of accessories is broad; 38 of the official Triumph ones are available to be precise and according to those in charge, 70% of customers fit accessories to the Tiger Sport. On my list would be an Arrow silencer (£675) which would not only save 2.3kg but would enhance that beautiful engine note even further. Heated grips (£180), comfort seat (£250) and the 55.5 litre panniers (£640) also make my wish list. The panniers are the same as the outgoing model’s so can be transferred if you’re upgrading, the left-pannier is big enough to hold a full-face helmet.

On the downside, there’s a mild vibration through the raised handlebars which affects the large and very easy-to-adjust rear view mirrors. They become a little blurry at speed but this is a minor qualm. The centre of gravity and weight distribution makes the bike very stable but I wonder how it would handle if the large, under-seat, single-sided exhaust were to become a short, stubby version instead. It would save weight too and have an added benefit in providing equal space in the right-side pannier.

The Hinckley-made machine is available in two colours with no price difference between them: Matte Jet Black with Neon accents or Aluminium Silver with Red accents. The first bikes will be in dealerships in time for next weeks’ nationwide season launch. 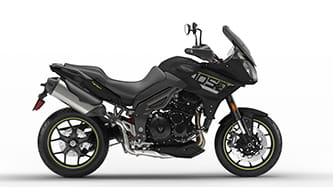 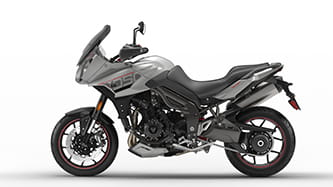 The Tiger Sport might not be in the refinement and power league of the BMW S1000XR and Ducati Multistrada but equally it doesn’t cost nearly as much. With these improvements there’s every chance the latest Triumph from the Hinckley stable could grab some headlines and cement itself back in the shop window. It’s versatile, practical and has the right amount of sporty personality to warrant its name. Is it the best of all worlds? That’s down to the individual rider and their needs but what I will say is that after a full day of riding, I’d be more than happy to repeat the exercise again tomorrow. 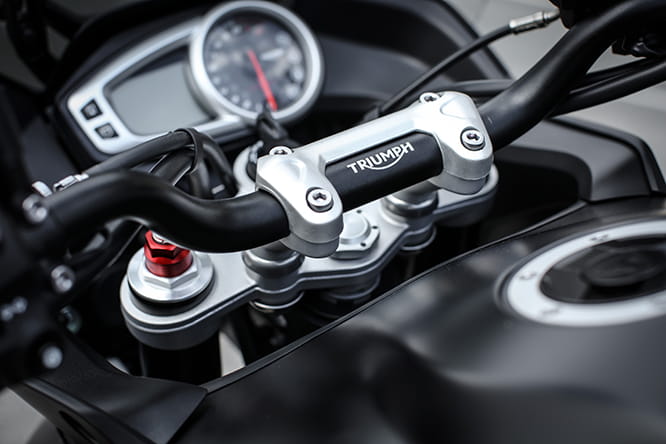 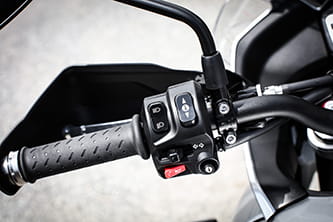 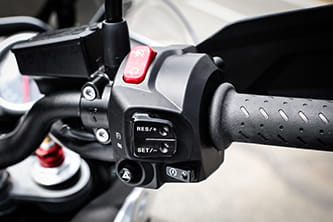 Do you own the outgoing model? Tell us about it.  or