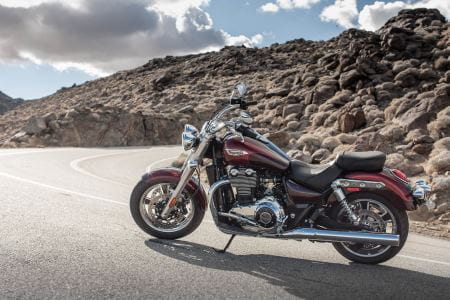 It would be easy to take a quick glance at the Thunderbird Commander and assume it was barely different to the mean black Thunderbird Storm that Triumph released three years ago. The Commander has chrome in many places where the Storm is black, including headlights, engine covers and exhausts, but the shapes of the two big naked cruisers and their 1699cc parallel twin engines are almost identical.

There’s much more to the Commander than chrome and two-tone paintwork though. Its dohc, eight-valve engine is borrowed straight from the Storm, though a new airbox and exhaust system combine to reduce peak output by a few horsepower to 93bhp, while adding a more aggressive exhaust bark thanks to a new valve in the exhaust. And the chassis is completely new, designed to improve both handling and comfort.

The Commander’s frame, shared with the new Thunderbird LT tourer, retains the original T-bird’s steel twin-downtube layout and is redesigned to allow fitment of a new seat that is just as knuckle-draggingly low (at 700mm) while having an extra 30mm of padding. Suspension at both ends is also new. Revised Showa front forks are matched with dual-rate shocks from the same Japanese firm, their closer spaced coils hidden from view by chromed shrouds at their tops. 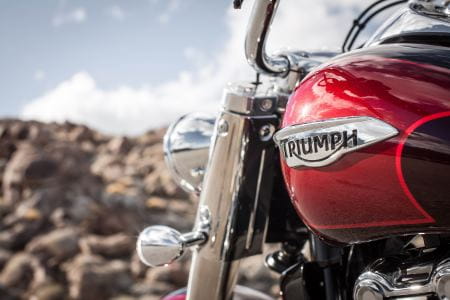 Unlike the screen-and-panniers equipped LT tourer, the Commander is a classical naked cruiser with swept-back bars, a stepped two-piece seat, chunky fenders and plenty of laid-back attitude. It’s very much built for comfort, though, with a roomy riding position plus footboards for the rider. It shares the LT’s new seat, which incorporates a triple-density foam pad, complete with Thunderbird logo, that is intended to support the rider’s lower back.

Straight-line performance is strong in a laid-back way, with heaps of low-rev grunt from a big motor whose impressive maximum torque figure of 111 ft.lbs is churned out at a lowly 3400rpm. That made for very relaxed riding on the launch near San Diego. At 40mph in top the Triumph was lolloping along at just 1500rpm (not that I could tell because there’s no tacho). Twisting the throttle sent it surging forward, gently at first but with increasing enthusiasm until it was rumbling along at a very satisfying rate, the tank-top mounted clock console showing a speed that would not have amused the California Highway Patrol.

Handling was very good for a bike that is very long (with a wheelbase of 1665mm) and weighs almost 350kg with a full tank. Despite all that weight, the Commander was very easy to steer when we reached some twisty roads in the hills east of San Diego. A bit more ground clearance would have been handy, because the Triumph corners so effortlessly that its footboards scraped all too often. But most owners will doubtless be happy at a relaxed pace. Ride quality is excellent and overall comfort outstanding, helped by that small but effective pad in the seat.

In other respects the Commander is up to the mark, with a good level of finish, and a respectable range from its 22-litre tank. The speedo console’s small digital display doesn’t include a fuel consumption reading, but there’s a range-to-empty reading, and you can toggle the display via a button on the right bar. The accessories list is very comprehensive, incorporating many chromed parts as well as the quickly-detachable screen and panniers that can turn the Commander into something closely resembling the LT tourer. 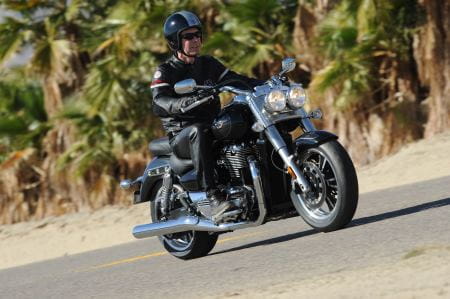 Unfortunately for Triumph in their efforts to crack the huge but challenging US cruiser market, Harley-Davidson make some very good bikes these days and have recently been joined by another historic and well funded home firm in Indian. For most buyers of big cruisers, V-twins are the default option and a British parallel twin is going to have to be very good to tempt them to try something so different.

Well the Thunderbird Commander is a very good bike, with competitive performance and outstanding comfort. At £12,999 on the road it looks reasonably well priced too, but anyone in the market for a 1700cc cruiser with twin headlamps will doubtless notice that Harley’s similarly equipped Fat Bob costs slightly less, at least if you don’t mind plain black paintwork. The Commander is a capable alternative but it remains to be seen whether that is enough to tempt cruiser buyers, especially in the States, to try it.