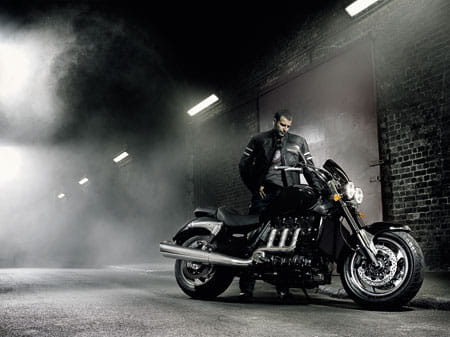 In 2013, Triumph should be celebrating ten years of the Rocket III on sale. We say should because, lets be honest about this, why shout about something that hasn’t sold that well? How many have you seen over the course of two weeks in high summer?

Ok, so it was designed for the American market where big is traditionally best and original Meriden-built Triumphs sold hand over fist. But what Triumph today overlooked was that Americans used to buy Triumph bikes because they were lighter, more powerful and handled better than their American counterparts. And Triumph thought a 2294cc, 367kg bike would sell?

Despite the outrageous dimensions, you can’t help but admire the three-cylinder Goliath of an engine. A claimed 163ftl lbs of torque ain’t to be sniffed at especially from standstill. It’s demonically quick over a quarter mile and its bulk actually means the rear tyre grips, rather than spin into an early demise.

It is also one of the smoothest engines ever built with an exhaust note only Triumph and the BBC special effects department can produce. If the sheer thrust of the Rocket doesn’t make neck hairs stand, the engine and exhaust tone will.

Big capacity, and slow revving with it, coupled with a massive shaft drive unit means gearshifts are noisy and very noticeable through the boot. It isn’t so bad if shifting gears a little slower and more positive than you would on something with less of a stature.

Talking of stature; the Rocket III Roadster commands big road presence. The blacked out engine and chassis ancillaries go hand in hand with the butch physical side to produce a bike that is menacing as well as interesting to look at. Let’s be honest about this; anyone into mechanical engineering will be amazed at how Triumph managed to squeeze a 2.3-litre engine into a frame that has a lowly 750mm seat height!

In a straight line the rider does nothing but work the throttle and ABS-equipped brakes. Throw bends into the story and you can chuck the Bullworker away forever. Yes, at 367kg for a naked muscle cruiser it’s a physical bike alright. If out for a ride with mates over a weekend be ready to accept hard work in order to keep up on bumpy backroads.

But who would buy a Rocket III to be part of the go-fast brigade? The idea behind the Rocket III Roadster is to ride in comfort and look different to the rest while waving goodbye to almost everything at the lights even before green flicks on. Yamaha’s VMAX can outgun the Rocket just. But the Rocket III beats the Yamaha on price by a good £9k.

Handling is best described as heavy and ponderous. So it’s a good thing that the footpegs touch down early if only to remind you there’s a lot of weight underneath the bum and it takes some hauling up if there’s a surprise pulling up around the next corner.

If your cup of tea is big is best then look no further than a Triumph dealer and the three-cylinder mammoth sat in the corner. The red one’s look better…

+ points – Nothing else like it, goes like hot poot off a shovel
- points – excessive weight, clutch kits are expensive and frequent if misbehaving

Get Triumph Bike Insurance with Bennetts.