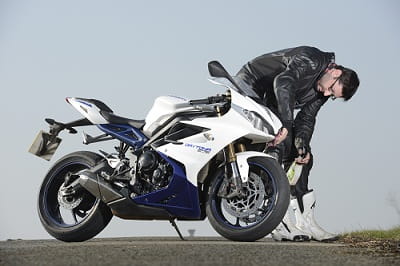 Since its launch in 2006, Triumph’s Daytona 675 has consistently been judged as the best supersports bike money can buy so we couldn’t wait to get our hands on the all-new 2013 model when it landed in the UK.

For more than six years, the screaming three cylinder motor combined the best attributes of a supersports bike with more torque than most of its rivals, ensuring it lapped faster than any of its rivals on track and outpaced them on the road too. Combine that with a Grade A chassis and you’d think Triumph would just sit back, paint it a new colour and watch the pound notes roll in, or maybe that’s just me.

With just a few tweaks the Daytona 675 (and more expensive 675R) could have continued its dominance over the Japanese and Italians, but Triumph are on a roll at the moment and that wasn’t good enough for them. So instead of just giving it a lick of paint, they created an all-new bike with new engine chassis, suspension, brakes, wheels, and styling and made the best even better. In fact, one of Triumph’s most senior engineers told me at the bike’s Milan Show unveiling that only the indicators and a handful of nuts and bolts are the same as the older model. I believe him. The new bike is immense and one of the best handling bikes you will ever ride.

Add in switchable ABS with a mode that allows you to move the rear tyre around on Circuit mode, a slipper clutch as standard (even on the ‘normal’ 675 Daytona), a bit more torque at 55ftlb, the ability to rev slightly higher to 14,400rpm and peak power up to 126bhp at 12,600rpm. The motor gets a wider bore and shorter stroke, new twin injectors per cylinder, titanium valves and that new intake system. It all adds up to a very impressive motor. 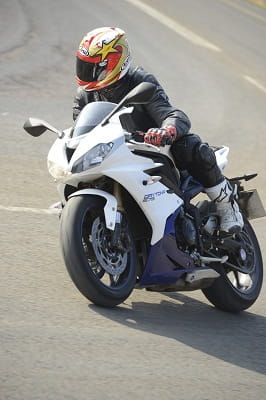 On the outside, the result of the styling may not be to everyone’s tastes, and to be fair to Triumph any time they change the style of one of their bikes they come in for a lot of flack from fans. Even if marketing departments and customers demand it, a vocal bunch on forums usually make them question their sanity. But fear not. It’s not quite as sharp looking as the old one, but to ride it truly is something else.

In fact, away from the track, I’d go as far to say that normally I’m not too bothered about supersports bikes (despite owning various ones in the past), they pass me by a little, they can be hard work and I’d prefer big capacity thousands any day of the week. But this incarnation of the Triumph Daytona 675 has grabbed me by the balls and made it to the list of one of my favourite bikes of all time.

Some claim? Well just fire it up and you know it’s something special. Triumph engineers are the kind of guys that know that bikes need to sound like bikes, and this does in every possible way. 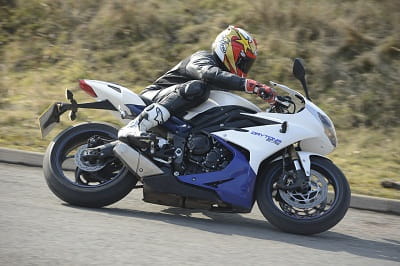 The airbox, which now intakes right into the frame through the bike’s headstock has been tuned so that you get maximum roar from as little as 6000rpm and once you start piling on the revs you’re immersed in a three cylinder engine cacophony that will get you coming back for more and more revs.

The gearing has been lowered to give a bit more punch, and one of our test riders said the bike didn’t feel quite as strong low down, but it’s not something I could confirm 100 per cent, or noticed to be honest. 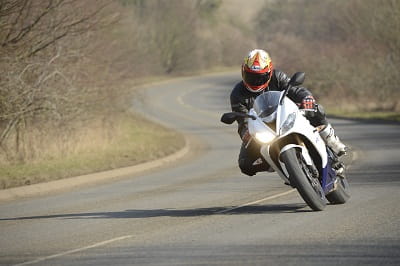 But get the bike revving, into the midrange, immerse yourself in that three cylinder roar and you won’t want to stop it. Even when running ultra grippy Pirelli Supercorsa tyres in the wet, the road tyre equivalent of cut slicks, the bike seems to find an extraordinary amount of traction thanks to its amazing throttle to rear tyre connection and the traction of its pulsing three-cylinder motor.

In town the bike’s motor is smooth, tractable and easy to ride, the riding position has been softened slightly, footrests are 10mm lower and there’s less weight on the wrists but you wouldn’t want to spend too long at low speeds or on town work. In general it’s lost that incredible feeling of narrowness but in a world where none of us UK bikers are getting younger or skinnier that’s no bad thing.

Away from town, which, let’s face it, is where this bike will be ridden most of the time, the riding position connects you to the bike, to the road, and allows you full control and to feel linked to everything the bike is doing.

Sadly I never got chance to ride it on a warm sunny day, it was always just above freezing, but attack a road and the bike allows you to take on a road like few sports bikes ever before it. 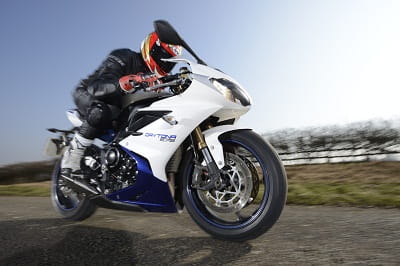 The power might be mostly at the top-end, but revving it is so rewarding you don’t mind. Rev it till the blue shift lights tell you to change gear, and feel the extra revs which allow you to rev it on to 14,400rpm between corner (even though maximum power is at 12,600rpm) and get your head down.

If you’re used to the power of a big sports 1000 you may be slightly disappointed, but in the real world, where there are junctions, cars and you don’t want to be doing 170mph to feel like the bike’s actually working, few would ask for more performance on the road. 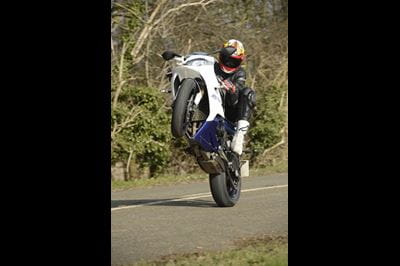 Okay, so it will take you to an indicated 160mph should conditions allow, but for most of the time, it’s a super fast back road warrior that’s happy to sit at 120mph should the world require. I’m talking about on a private racetrack of course…

For the rest of the time, you can ride it anyway you like and it’s always rewarding. Few bikes give as much satisfaction for most roads, most of the time as the new Daytona 675.

The new KYB suspension could do with being slightly softer for bumpy roads, but it’s never harsh, and as it’s all fully adjustable then just tweak away. The dive from the front forks is controlled under braking and even with fifteen stone me on board I never wished for the rear to be firmed up.

The more expensive Daytona 675R (£10.599) is equipped with Ohlins suspension, a quick shifter, some fancy carbon parts like fairing inlays and Brembo brake calipers. But unless you’re a regular track day goer or a bit flash, I can’t see any reason why you’d buy the more expensive ‘R’ version.

The switchable ABS system, especially in Circuit mode, is so good that I barely gave it a thought. It’s adjustable, but for fast road riding, just leave it in Circuit mode and forget about it. Even with the back-end wiggling around under hard brakes you hardly notice the ABS, and the slipper clutch means you can take real liberties with late braking into corners.

Away from attack mode, let’s make no mistake that this is a small bike, but it’s not uncomfortable. I did more than 600 miles on it and only needed to get off to fill up at about 100 miles. Admittedly I was riding it hard most of the time I had it, so more careful use will get mid-40s miles per gallon, rather than the mid-thirties I was getting most of the time.

The screen is okay for most riders, the headlight is good, even if most people tell you the bulb has gone as it only lights one bulb on dipped beam, and there’s a fair amount of room to move backwards and forwards in the seat. The pillion seat is made for the size of female pillion you only see in Hollywood movies, but aside from that, what is there to pick fault with?

Some have moaned about the side exit exhaust, some have moaned about the styling, and yes it’s still tiny even if it feels bigger than the old one, but I can’t help being massively affected by the experience of running this bike for a couple of weeks. It’s straight on my list of all-time favourites, right up there in the last couple of years with other stand out bikes on my list like the Ducati Multistrada, the BMW K1600GT, the Ducati 1199 Panigale and the BMW S1000RR, and I really didn’t expect that.

It’s an amazing road bike and I’m glad that Triumph didn’t just sit on their laurels and wait for sales to slide. Get out and test ride one now.

MORE PICTURES, DETAILS AND STATICS BELOW: 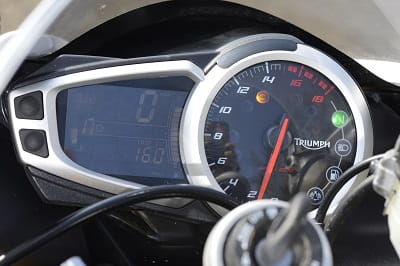 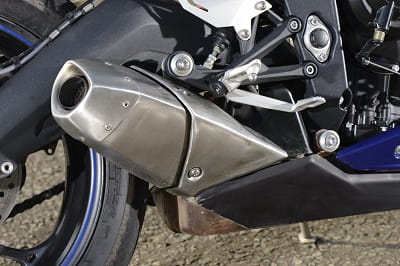 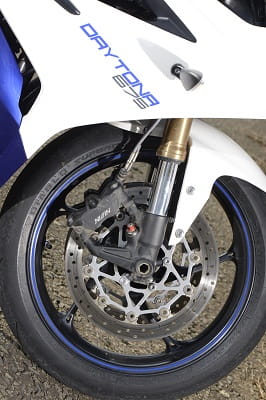 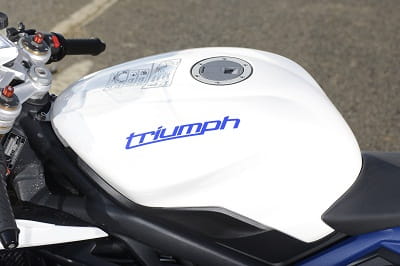 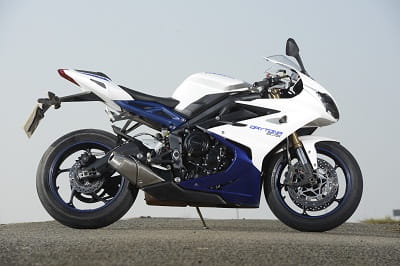 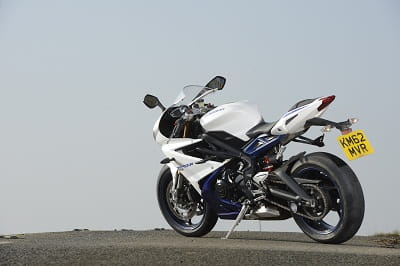