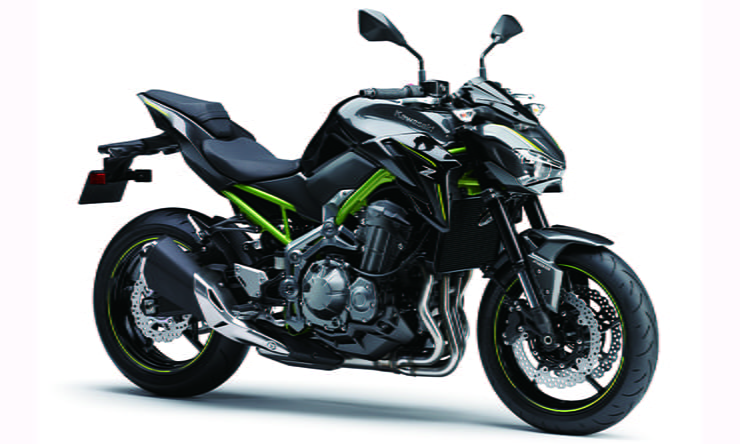 The new bike sees the return of the Z900 name last used in the mid-1970s and is a brawny supernaked in the great Kawasaki tradition, slotting between the Z800 and Z1000 in Kawasaki’s range, with the manufacturer claiming that the Z900 offers a more upright riding position than the other large capacity naked bikes in its range.

While the 125bhp engine is based on the Z1000 unit, Kawasaki claims that the frame is an all-new design that is much lower and lighter, making the Z900 one of the most accessible big capacity bikes on the market. Kawasaki say that they’ve worked hard on ‘sound research’ with the Z900 and have designed the airbox to make a sweet sound at high rpm and have even positioned the airbox inlet upwards in order to make it audible to the rider.

Kawasaki’s new steel trellis frame design weighs in at 13.5kg, contributing to a wet weight of 210kg. Up front, the 41mm upside down forks are adjustable for preload and rebound damping, while the similarly adjustable rear suspension sees the shock and linkage unusually positioned above the swingarm – which Kawasaki say is aimed at centralising mass.

It all looks like a recipe for really agile hooligan tool. Sitting on the bike at its recent unveiling at the Milan show reveals flat and wide handlebars with a low (claimed 795mm) and narrow seat. Quite whether Kawasaki needs three bikes as similar as the Z800, Z900 and Z1000 is a matter of conjecture, but there’s no doubt that the new model looks like a welcome addition to the competitive super naked class that is likely to depose the Z800 once stocks of the Euro3 Z800 have been sold through.