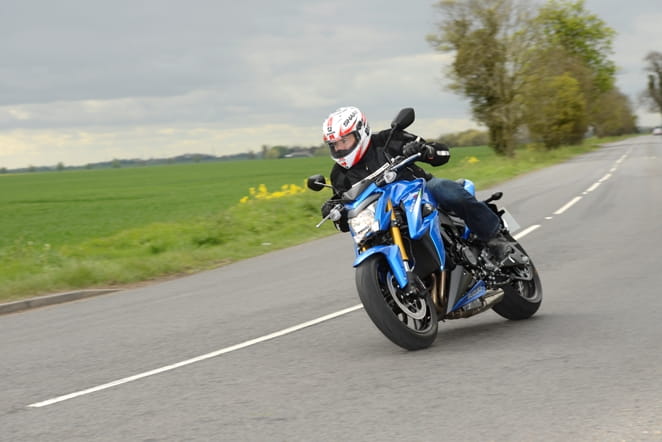 Wake up. Eat breakfast. Drink coffee. Ride to work. Do work, etc. Is this a familiar pattern? If so, Suzuki has found a way to save you 5 minutes of every day. It’s called the GSX-S1000 and when you ride it you won’t require any caffeine because it’ll have you buzzing all day. It’s a full-on entertainment package.

Thankfully for fans and potential customers of these street-fighter style bikes, each model offers its own party piece with differences in price, power, engine performance, comfort, range, handling and so on, leaving plenty of options to choose from despite similarity in their foundations. For that reason doesn’t it make you think that if a manufacturer was to send its brand new product to a party where it has already seen, ridden and analysed the other attendees, it would offer something a little different, its own unique selling point? So the question is; does Suzuki have what it takes to stand out from the crowd? 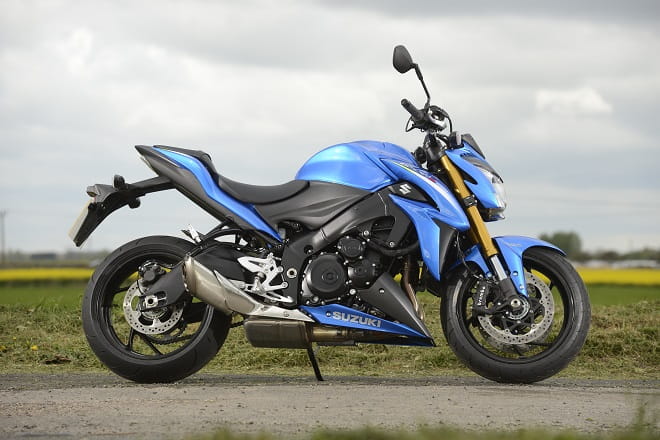 Super-naked machines are designed for the purpose of street-riding as a preference over long-range cruising thanks mainly to their lack of weather protection. As a result low down and mid-range grunt is more important than all-out high rev power and this gave Suzuki a chance to whip out their trump card; the 10-year old engine that was used in their GSX-R1000. Yep, the beautiful K5 model with its legendary motor.

The engine has been redefined though to suit the style of its new house. Lighter and with a revised injection system, the 1000cc motor produces a maximum of 144bhp at 10,000rpm which slots it firmly into the middle of the aforementioned rivals. Down versus the BMW, KTM and Aprilia but up on Kawasaki, Yamaha and Honda. And true enough, when riding the Suzuki, accelerate as hard as you dare from rest or even out of corner and the bike will give you a second of bum-clenching drama before softening off. 144bhp is plenty of power for sure and enough to get everybody from A-to-B with no complaints of a lack of pace but the initial eye-straining thrill could be extended with an extra 10bhp, for example. The throttle is hyper-sensitive between being completely shut and 1% open which adds to the bikes’ urgency but doesn’t necessarily assist low-speed cruising through the 30mph limits or town centres. It’s certainly responsive at low speed but too touchy when you’re ready to open the throttle coming out of a second or third gear bend. If you’re aware of it before getting on, or even after 1/2 mile, you’ll get used to it and in my opinion it adds to the character of the bike. 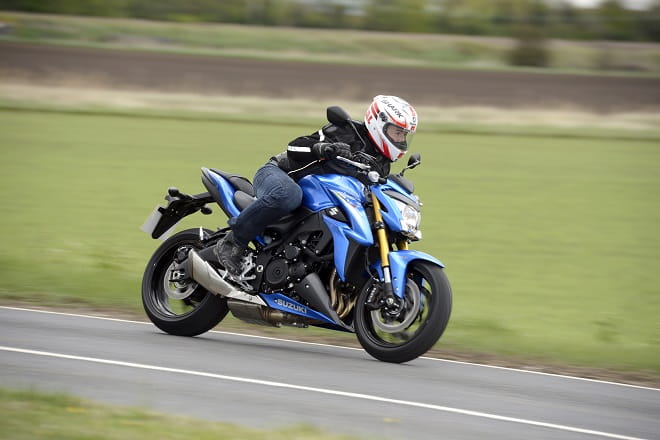 But don’t assume this is simply a GSX-R1000 minus its fairings. Oh no, the GSX-S1000 is a whole new bike. The frame is thicker in areas for rigidity while the wheels, exhaust, suspension and electronics all differ and that results in a 4kg heavier bike (209kg inc. ABS) although you wouldn’t believe it such is its compact appearance and light feeling to ride. The bike is quick to turn, skittish and alert like a rabbit changing directions at full gallop, hopping over B-road bumps, it keeps you alert, awake and fully entertained. Like I said, no need for caffeine. The rider is really positioned ‘in’ the bike allowing plenty of knee grip against the tank with a deep, flat and more-comfortable-than-it-looks seat. It feels like you’re positioned over the front wheel which is a handy place to be when adjusting your position for the corners. The token gesture of a pillion saddle is high above on the sub-frame part of a pointy rear seat unit and is handy to push your arse against for an optimum MotoGP-esque riding style. The 810mm seat height and riding position is suitable for the shorter rider (says my 5’ 5” colleague), even the kick stand is ideally positioned.

The raspy, race bike roar from the standard 4-2-1 stubby pipe complements the sharp throttle at lower revs. That noise turns toward a scream as you head towards the 11,500rpm red line. And it’s in the latter half of the rev range where you should spend as much time as you can. It may displease other road users who will immediately have you marked as a hooligan but you’ll be too busy being entertained to worry. 85mph is easily achieved in 1st gear alone such is the long power band. The downside to this tactic is the lack of requirement for the super-sharp, blink-and-its-changed gearbox. The clutch lever is so light you only need to think about moving you finger(s) towards it and the bike knows what it needs to do, in fact it’s probably in the next gear. Then, back down the box, the slipper clutch has everything under control. I tried to fool it but banging down the gears race-box style but the Suzuki was not to be moved. No wobbles, locking rear or over-revving motor just a tidy change and a little more engine braking. 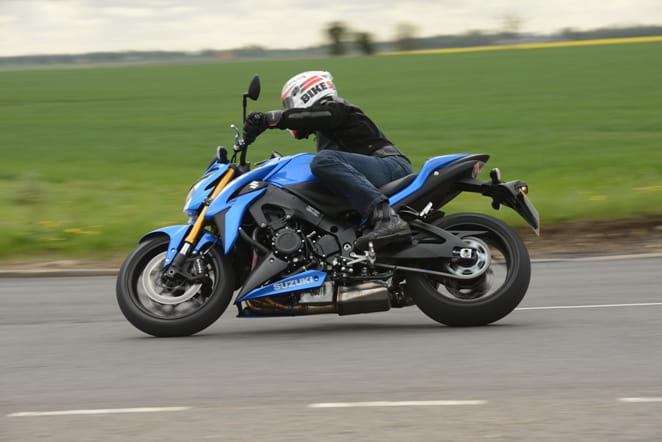 An aggressive nose-forward concept styling is assisted by the mono-headlamp complete with frown. The bike has very few options and is rather basic. There’s nowhere to tie-down luggage, it has minimal electronics and options. In fact riding options are restricted to just a three-stage (plus off) traction control system. This is operated via the large ‘MODE’ button on the left handlebar and the easy-to-read display. Rear-view mirrors are easy to adjust and offer a clear view although the turning circle is more barge than London taxi despite its agility at speed.

Interestingly, modern Suzuki’s have always required the rider to pull the clutch in to start the bike, even in neutral, but Suzuki have dropped this on the GSX-S1000 range. Just engage neutral and push the starter like most other modern bikes. 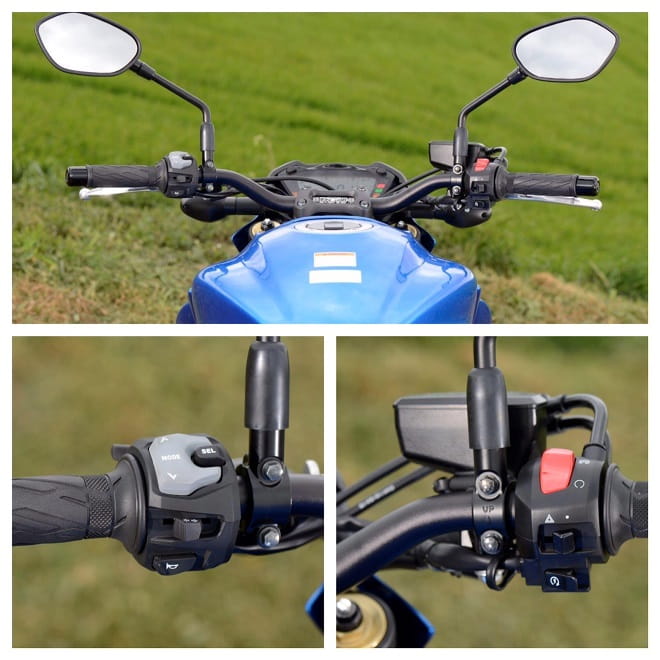 Dump the daily Costa run and ride a GSX-S1000 instead. It’s a street bike that’s made for the B-roads. It arrives in dealerships in June but if you’re attending the MCN Festival of Motorcycling this weekend, you could ride it!

IN OTHER SUZUKI NEWS, HOW ABOUT 0% FINANCE?

Suzuki GB has announced its new 0% finance campaign, which is available over 48 months with just a £1 deposit, and will run until July 30 on a range of models including: V-Strom 650 and new V-Strom 650XT and all variations of the V-Strom 1000. The Hayabusa and Hayabusa Z models are available as part of the new offer, along with the GSR750 and GSR750Z, the M800 and C800 cruisers, the SFV650, and Burgman 650 Executive luxury scooter.

Given the choice of all the super nakeds mentioned above which would you choose?  or !