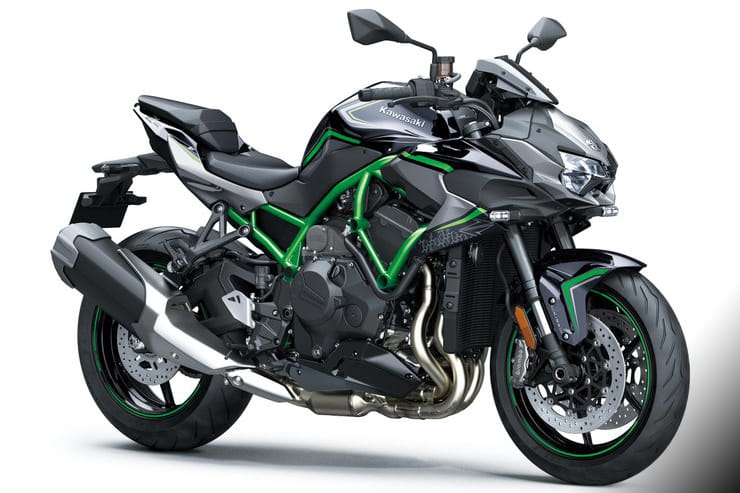 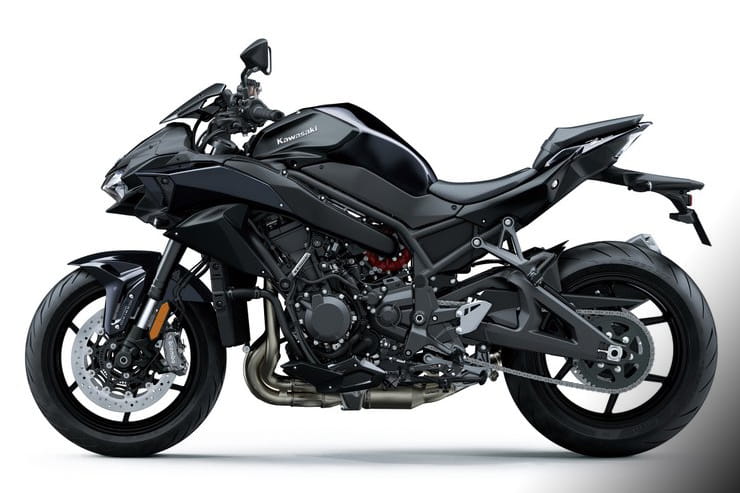 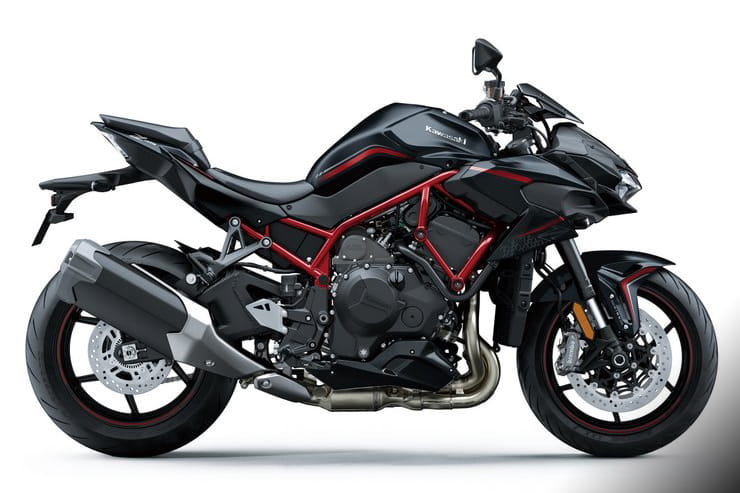 It looks like 2020 is going to be the year of the insanely-powerful naked bike. Not only do we have Ducati’s 208PS (205hp) Streetfighter V4 and KTM’s plans for an uprated Super Duke R but this: Kawasaki’s supercharged Z H2, which promises to be the ‘hypernaked’ for the others to aim at.

When it comes to out-and-out power, Kawasaki has pinned the Z H2 at 200PS, or 197hp. That’s the same output as the H2 SX sports tourer, suggesting the supercharged 998cc four-cylinder is in a similar state of tune. However, the same basic engine design is also used, with appropriate changes, in the 228hp H2 and the 306hp H2R, so there’s clearly plenty of headroom for more if the firm decides it needs to uprate the bike in future.

For the naked Z H2, the real target is to combine its huge power with similarly deep reserves of torque, and it’s hard to imagine that any of the normally-aspirated rivals will be able to compete when it comes to mid-range, pull-in-any-gear thrust. Peak torque is 137Nm, the same as the H2 SX, but it arrives a full 1000rpm lower at 8500rpm. 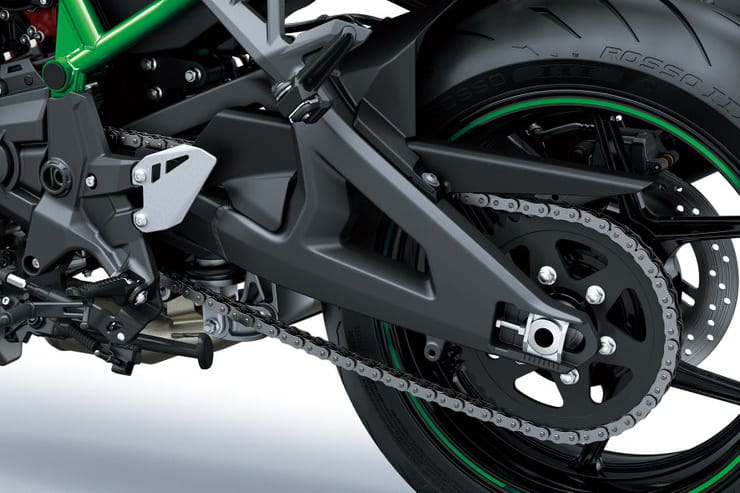 Kawasaki has officially unveiled the Z H2 as a 2020 model at the Tokyo Motor Show, and while the engine is relatively familiar the rest of the bike is new.

Although the steel trellis frame is the same concept used on the H2 and H2 SX, the Z H2’s version is completely new. Most notably there’s a double-sided swingarm, very similar to the unit used on the ZX-10R, and aluminium bracing panels either side of the swingarm pivot.

One area where the other H2 models have suffered in comparison with their rivals is weight; the H2 is 238kg wet and the H2 SX is a hefty 256kg. The Z H2 also suffers, with a kerb weight of 239kg - a figure that’s somewhat higher than its most obvious ‘hypernaked’ rivals. 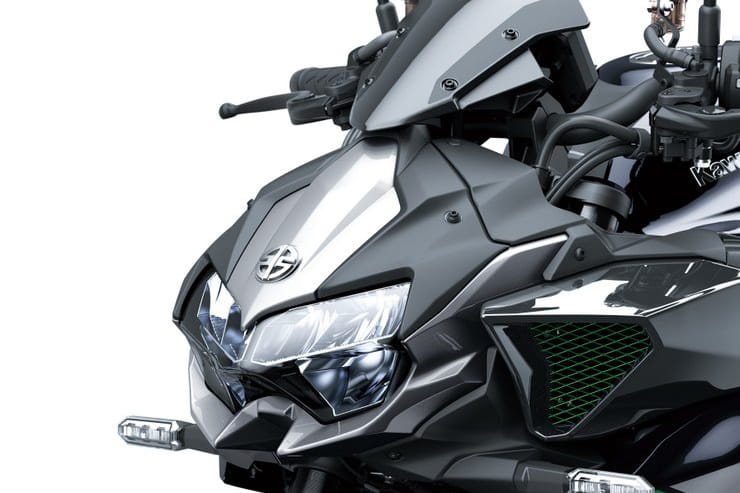 That swingarm choice hints that another key number might be somewhat lower than the equivalent figure on the Z H2’s supercharged sister models; the price.

We’re going to have to wait a bit longer before that’s confirmed, but there’s a notable lack of expensive trinkets on the Z H2 when compared to the other bikes bearing the ‘H2’ branding. There’s no clever chrome-effect, self-repairing paint here, and nary a weave of carbon fibre in sight. No doubt some owners will want to add it, but the impression is that this is a machine that, despite its supercharger and tremendous performance, could actually find its way into the garage of real-world riders. 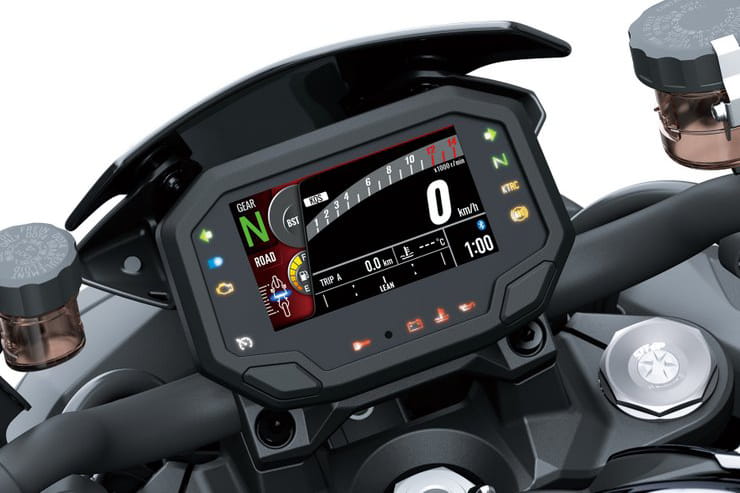 Not that it’s a low-end bike. The suspension comes courtesy of Showa BPF forks, with Brembo M4 radial calipers bolted to their bottoms, and of course those brakes are tied into a Bosch ABS system that also uses an IMU to work in corners.

Multiple riding modes are on tap, along with lots of traction control settings, wheelie control – which might actually come in handy here – and real-world useful kit like cruise control and Bluetooth connectivity. It will even record your maximum lean angle on Kawasaki’s Rideology phone app. Other electrickery includes launch control, rear lift suppression under braking, and three power modes – full power, 75% power or 50% power.

A colour TFT dashboard is in line with expectations in 2020 and actually makes the part-analogue displays of the other H2 models looks rather outdated in comparison. No doubt they’ll be getting similar kit in the near future…

On the mechanical side of things there’s a quick-shifter that allows clutchless changes in both directions, allied to an assist-and-slipper clutch. 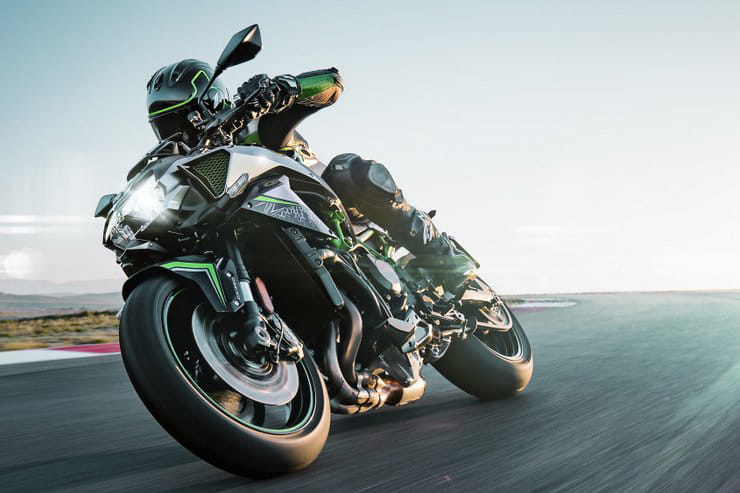 Whether the Z H2 manages to win the hypernaked wars of 2020 remains to be seen, as we already know the competition in the sector is going to be formidable, but it’s got to be in a strong position from a technical point of view.

Whether the bike’s styling has what it takes to win over customers who might also be considering a Streetfigher V4 or KTM Super Duke R, or perhaps an MV Brutale 1000, is less clear-cut. There’s certainly no mistaking the bike as a Kawasaki, with its multi-faceted ‘Sugomi’ design philosophy, but the bodywork is probably going to split opinions. It’s a somewhat fussy shape, with countless notches and indentations, and the asymmetrical front end, with a supercharger intake offset to the left hand side, might not appeal to everyone. From some angles the front end looks oversized, too, like the swollen nose of a lifelong heavy drinker. That’s because it’s attached to the main body of the bike, like a fixed front fairing, with only the tiny wind deflector above it turning with the bars.

Like it or hate it, you can’t accuse Kawasaki of being half-hearted with the styling, or anything else on the bike, and in an era where it’s becoming ever harder for bikes to carve a niche out and elevate themselves above their rivals, the Z H2’s unique technical solutions are sure to work in its favour.

The 200hp supercharged Z H2 will be available in dealers from February 2020.