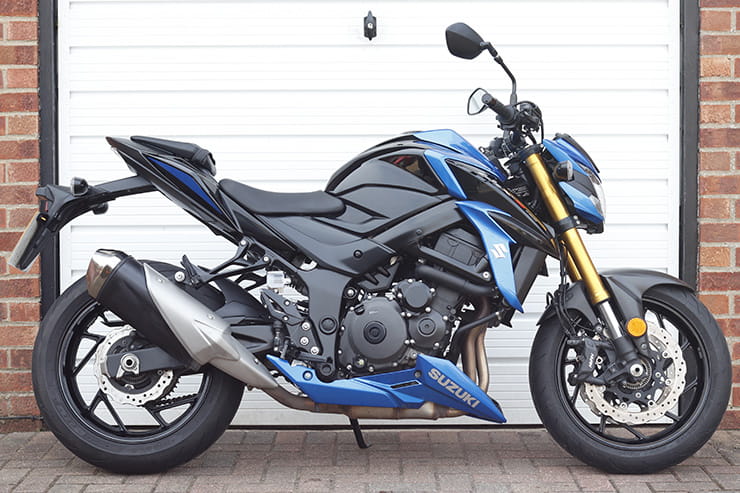 After just over 5500miles, with its accessories removed and cleaned for the last time, it’s a great chance to see how well the Suzuki has fared…

It’s all very well riding a new bike around the sunny roads of Spain and beyond on a press launch, but only by living with a motorcycle can you find out how well it really fares on British roads, and through the British weather… 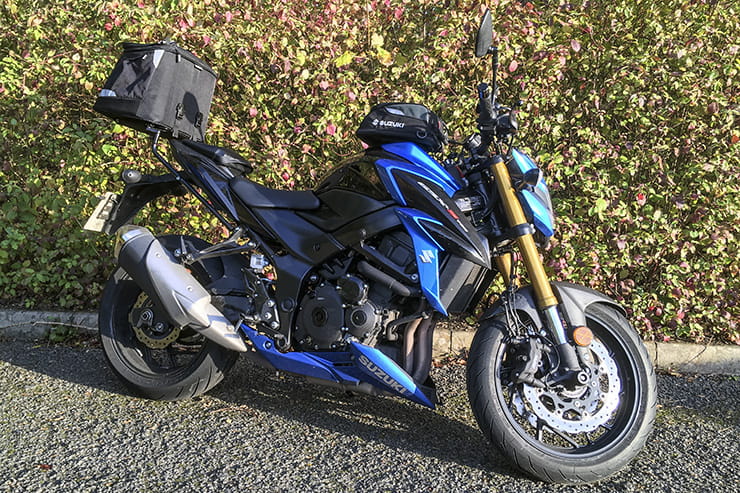 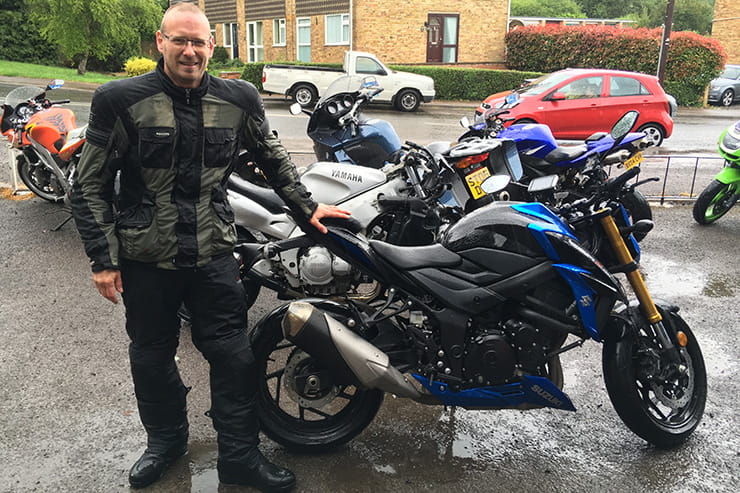 Ventura luggage made the Suzuki a lot more practical

BikeSocial had the Suzuki GSX-S750 on loan from March 2017 to April 2018, and during my time with it, I was riding it to and from the office almost every day. The low seat and reasonable weight made it an easy machine to move around, and not being too wide, it was easy to filter through traffic. The glitch-free fuelling also made it a joy in any traffic… if only the cable-operated clutch had been a little lighter. Having grown used to the slip-assist units of many new machines, the Suzuki’s feels stiff, leading to slightly tired fingers in really heavy city traffic.

Fuel consumption was typically around 45mpg, so given the 16litre tank, fill-ups were necessary every 135miles or so, to not be worrying about riding on fumes (the maximum range would be 157miles). I have seen 52mpg, which would give a range to dry of 182miles. There’s an accurate fuel gauge, but I’d have liked it to be backed up by a bright warning light too. Still, I never actually ran out of gas.

I used a Ventura luggage rack and pack on the bike, which gave me plenty of space for all my work kit. I’m a fan of lockable hard luggage, but the idea of putting a top box on the naked Suzuki just didn’t seem right. 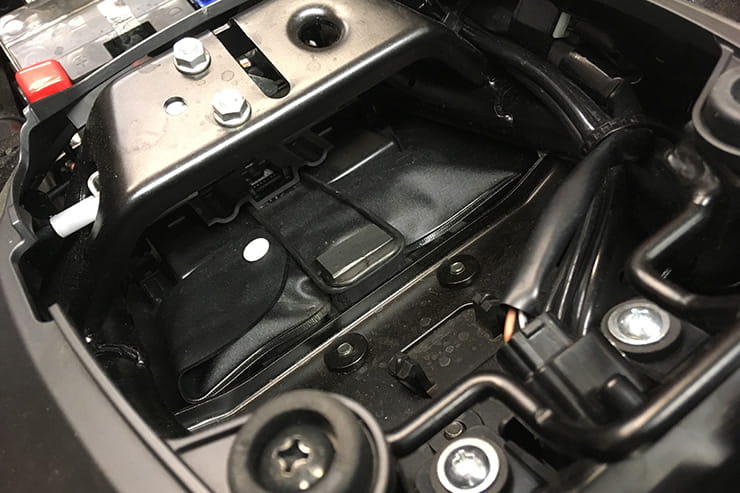 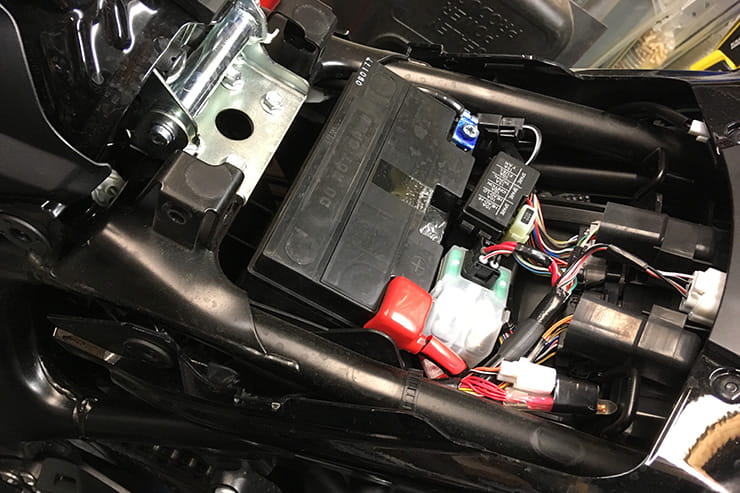 There’s a good amount of space under the pillion seat, but the battery needs an Allen key to get at

There’s a reasonable amount of space under the seat – enough to just jiggle a 10mm chain and an Abus U-type disc lock in. Impressive.

The headlight’s okay, but tip into a bend in the dark and the sharp edge of the beam means you tend to lose some of your view. Sadly this isn’t unusual on many bikes, but a set of Denali auxiliary lamps wouldn’t look as natural on here as they do on a tourer or adventurer.

Traction control is fitted to the bike, and I do appreciate the safety net, though it was only on the iciest days I noticed it cut in.

Over winter, I did suffer a flat battery, though this was due to the BikeTrac tracker being activated repeatedly by movement, so drawing power from the bike without it being run while I was away on press launches for two weeks. To get to the battery, you need to remove a bolt on either side of the fairing, pop these panels off, then take out two bolts to get the seat out. I’d recommend fitting a fly-lead to you can easily plug a charger in. 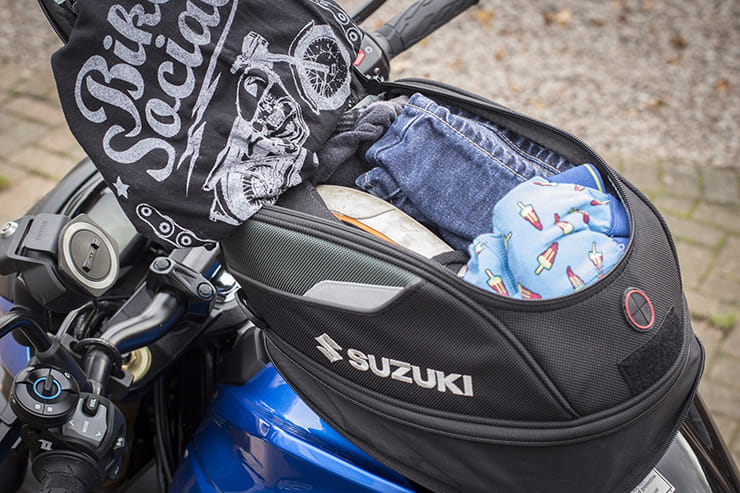 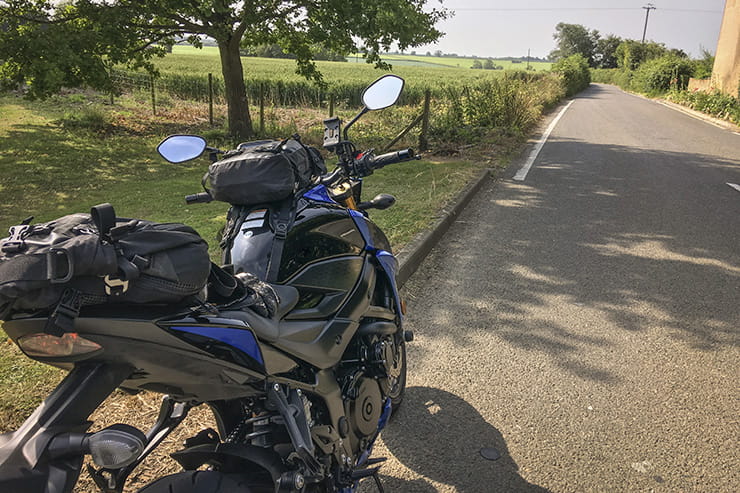 Before fitting the Ventura luggage and Suzuki tank bag, a couple of days away was covered by strapping Kriega luggage to the bike

Whenever and wherever I have a meeting or event to attend, I go by bike as much as possible. The Suzuki’s wind protection is fine for a naked machine, and the riding position not too extreme; just as I like it.

The seat’s not bad. I tend to get an achy bum quicker than other people, but my biggest issue here was that the sharp front edges dug into my legs a little over long journeys, while the rear pressed into my bum when I slid right back. Still, it’s far from the least comfortable bike I’ve ridden, and some of those were actually meant to be tourers.

For more luggage capacity, the sharply designed tail unit was a little restrictive – I couldn’t securely get soft panniers on, so strapped everything onto the rear seat. The Ventura pack can carry a lot, and leaves the pillion seat open for a roll bag, but if taking a pillion you might struggle with enough kit for more than a weekend.

I fitted the Suzuki tank bag, which while small added a useful amount of extra space. At £95 plus £32 for the fitting kit, it’s not cheap, but it’s well made, and if you buy a new GSX-S750, you might be able to barter a good price with your dealer. A larger model is also available.

At about 85mph+ in sixth gear on a steady throttle, the engine makes a slightly odd ‘wow…wow…wow…wow…’ sound. It bugged me at first, but it’s only through re-reading my notes that I remember now; clearly I got used to it! 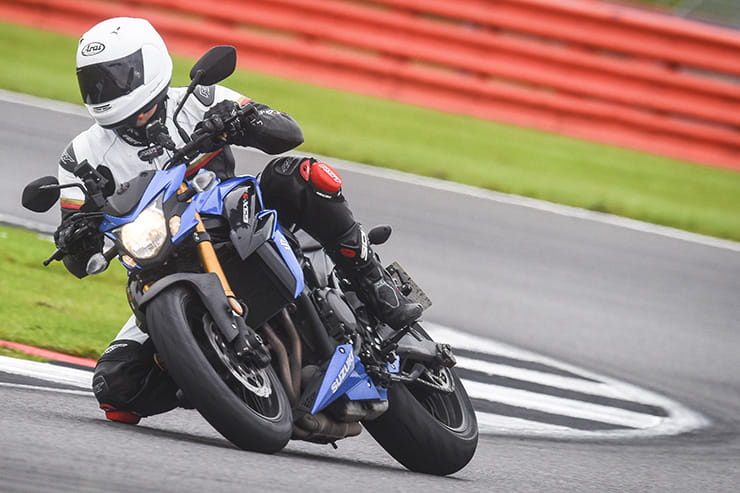 The GSX-S750 motor is sublime, and not just thanks to that brilliant fuelling (many manufacturers could learn a thing or two from Suzuki’s perfect fuel injection); it sounds awesome. I never bothered with a loud end-can as the induction howl was so brilliantly reminiscent of the GSX-Rs of the early 2000s.

Hacking around my favourite back-roads, the bike’s easy to throw around, but the rear shock did feel a little harsh sometimes – some pot holes and other imperfections could be quite jarring. A high-performance shock from the likes of K-Tech or Maxton would be money well spent if you regularly push hard, but I never felt the bike was truly bad.

On track, I loved it. I’m not the fastest rider, but there was more than enough go – and stop – to make this a brilliantly enjoyable bike. The brakes are good, giving plenty of progressive bite, though towards the end of the loan they didn’t feel quite so sharp. A set of new, sintered pads would likely have helped, or perhaps fitting some braided brake lines, though of course the ABS pumps on all modern machines over 125cc means this is slightly more involved than it used to be.

The bike comes with Bridgestone Battlax S21s as standard, which proved great on road and track. At 3685 miles, they’d squared off (I could have pushed them another 500-1000 miles), so switched to Pirelli Rosso IIIs, which were equally good in the wet and dry. 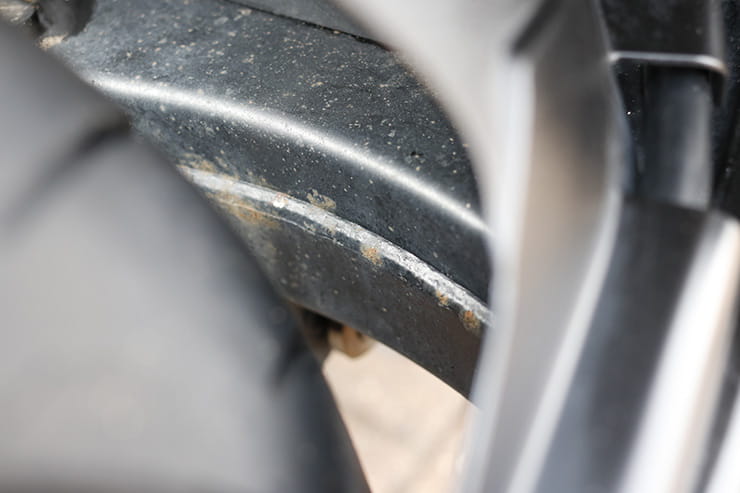 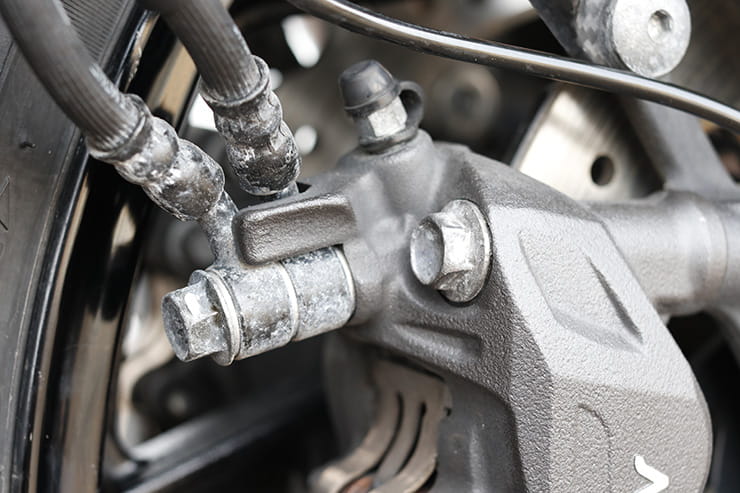 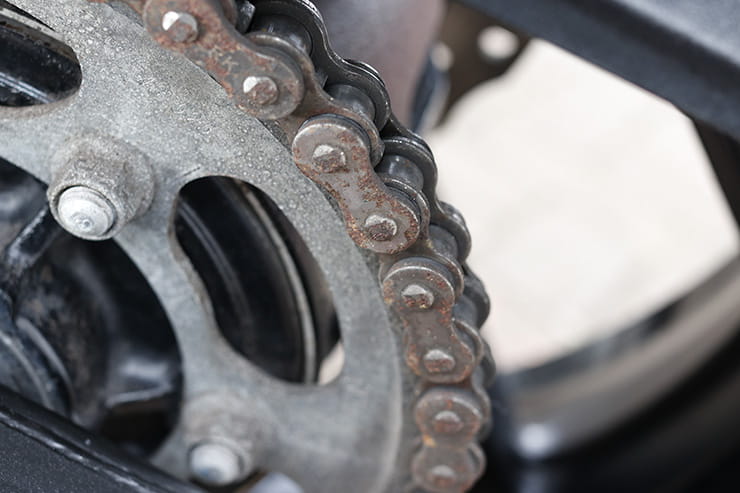 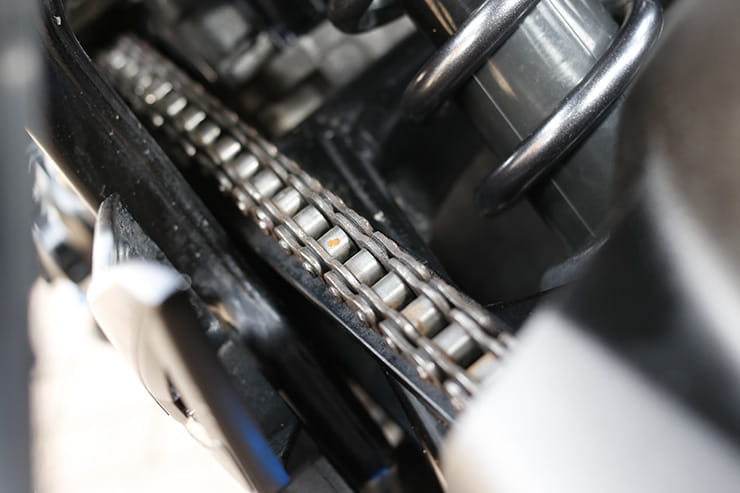 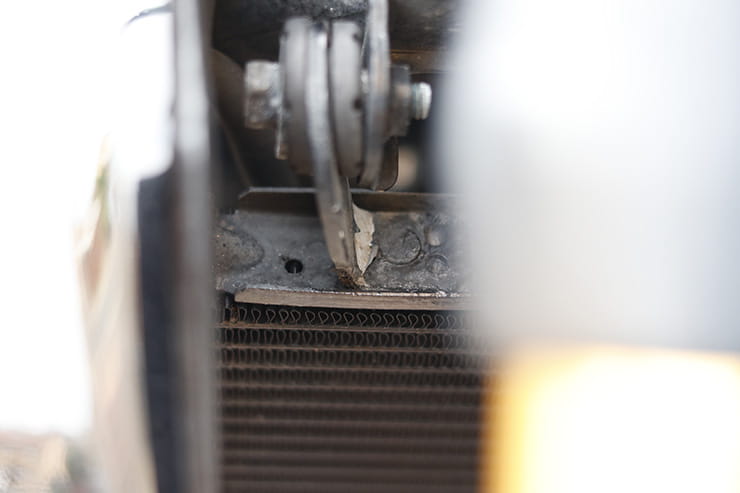 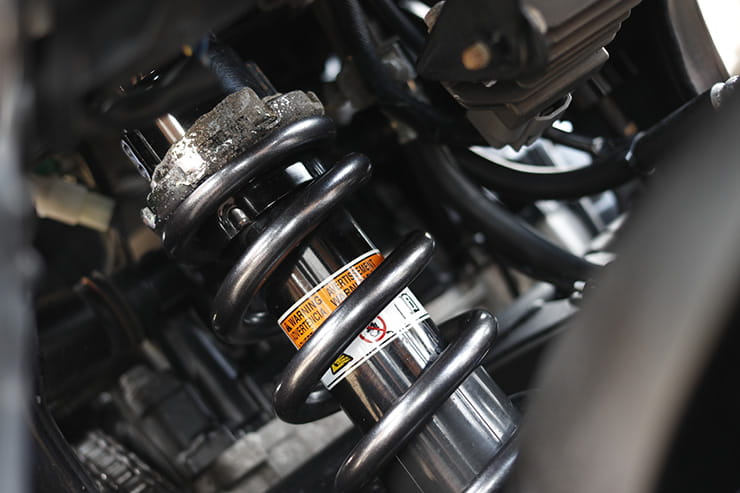 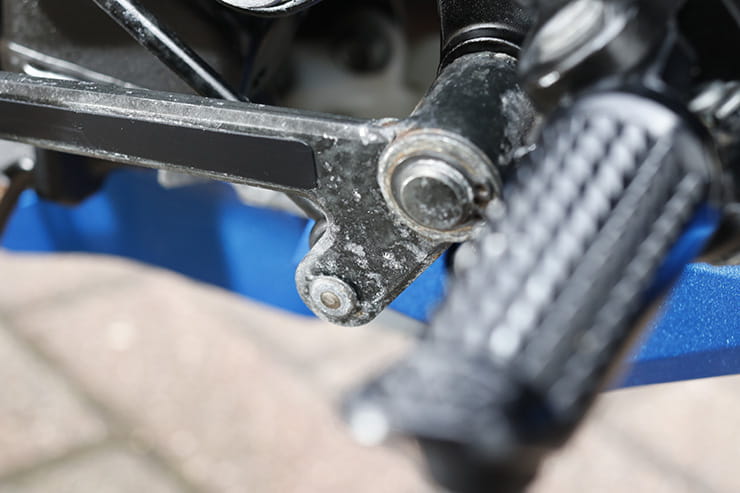 Whenever I get a bike, I spray it over with XCP Rust Blocker, but the general finish of the Suzuki GSX-S750 is very good – particularly the engine, which still looked great after 5500miles in all weathers.

I’m fastidious with my cleaning, but I don’t do it that often; really we should at least rinse our bikes off after every ride, but that’s just not always practical when you get home from work late on a cold winter’s evening. This bike had a relatively tough life, so some parts did suffer…

Chain: Despite cleaning it thoroughly and keeping it lubed, the side plates of the original chain kept rusting. The inner section though was fine, with only the odd spot of very light surface corrosion. The hex-head bolts make adjusting the chain relatively easy, though with no centre stand, you will need a paddock stand.

Banjo bolts and fasteners: These tended to fur up a bit. Knowing how they’ve gone, if I had the bike again I’d recommend wiping over all of them using a rag soaked in XCP.

Radiator: The paint at the top of the radiator, where the hanger folds up, had flaked at one spot – there was no corrosion, so I think this was quite recent, perhaps as a result of removing the rad guard.

Swingarm: This was the spot that, while far from bad, concerned me the most – if not noticed, over several years it could become an issue. The pressed-steel unit had several spots of rust breaking though the black paint on the inside of the swingarm, hidden by the wheel. I’d never got any XCP in here, so now knowing this vulnerability, I’d strongly recommend soaking one face of a rag and wiping it in here, avoiding getting it on your wheel. Better still, drop the wheel out and give it a coat.

Shock: The main shock body was fine, but the preload adjuster was fairly furry looking after a year. It’s purely cosmetic.

Gear selector: After cleaning, the thin matt paint on here hadn’t held up great, leaving a small area that spoiled the overall look. 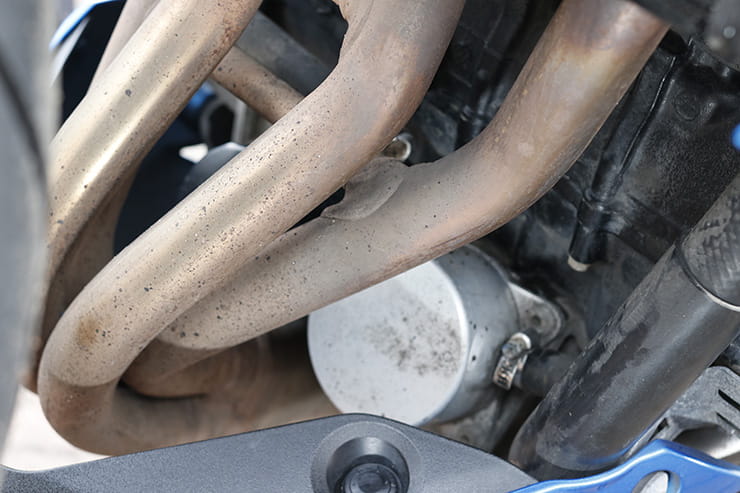 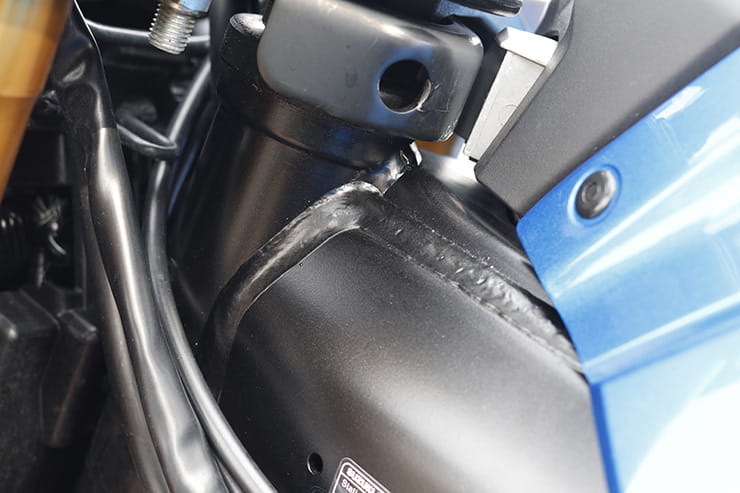 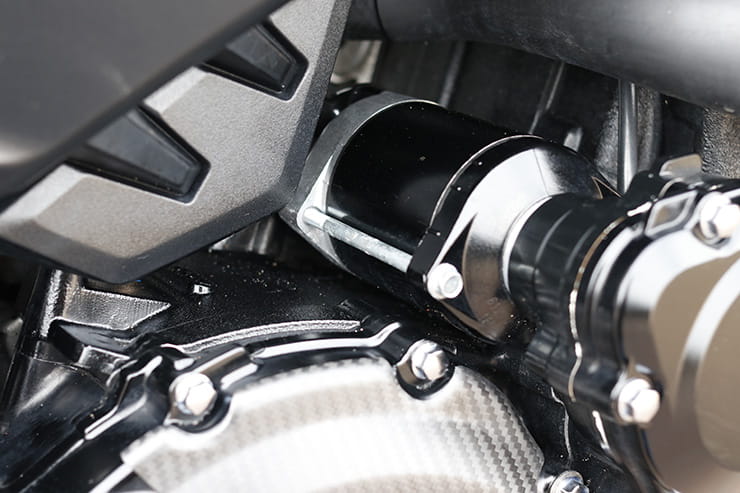 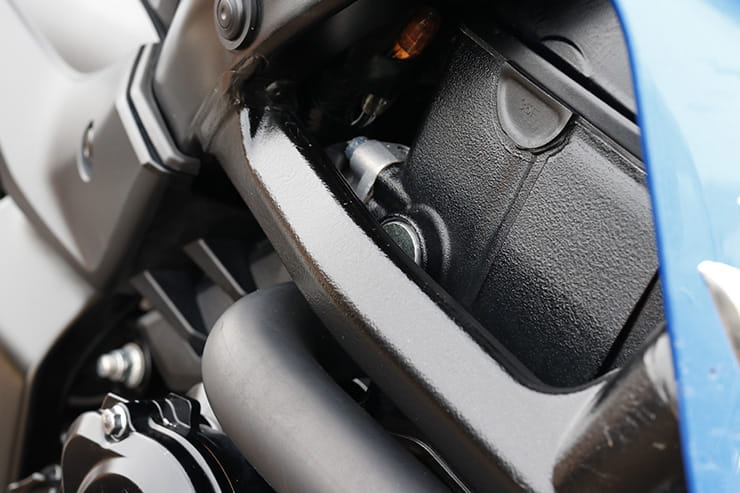 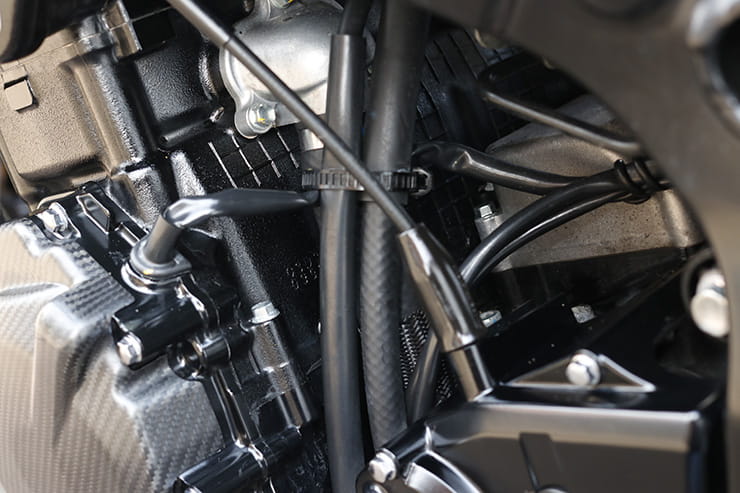 The exhaust downpipes were of course tarnished after being blasted with everything the UK’s councils spread on our roads, but they looked fine. Equally, the front of the engine fared well, with no peeling paint or corroded areas.

While the swingarm is worth a little extra attention to keep it tidy, the rest of the frame looked as good as new after a clean, including under the panels.

Cleaning the bike is not really harder than any other (I carefully use a jetwash, snowfoam and Surfex HD cleaner with a long-reach paint brush), but the wheels, with their matt finish on all but the outer edges of the rims, are a pain; when dry they look tatty as fine dirt and salt is held there… give them a good wipe off with a microfibre towel and a little XCP. 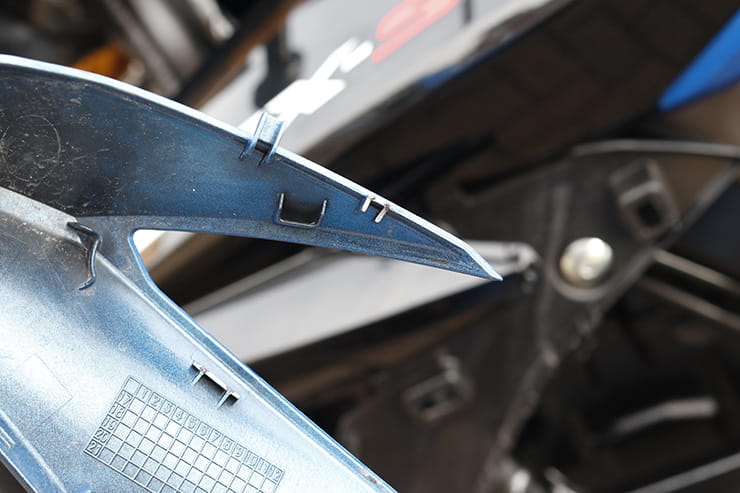 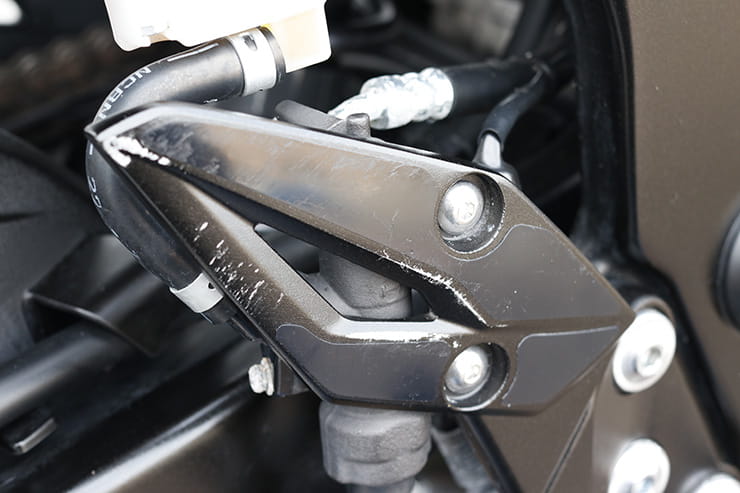 Testing products being the main part of my job, I tend to strip my bikes down a fair bit, to install heated kit, sat-navs and the like. The Suzuki’s plastic panels  look and feel great, but the small clips on the back are pretty poor, snapping easily. The bike goes back together well, but you need to keep be careful.

The heel plates are painted metal and scuff easily – they’ve not corroded, but they do look a little tatty after a year. I also noticed a small split on the edge of the pillion seat, through it’s only really visible with it removed, or when you’re kneeling down. 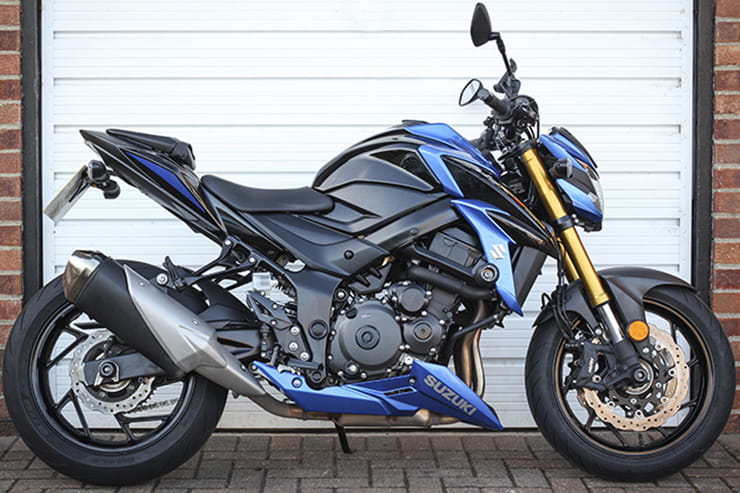 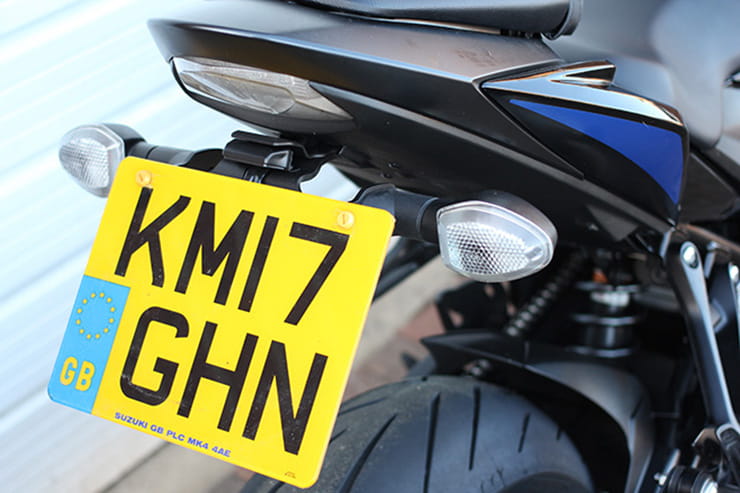 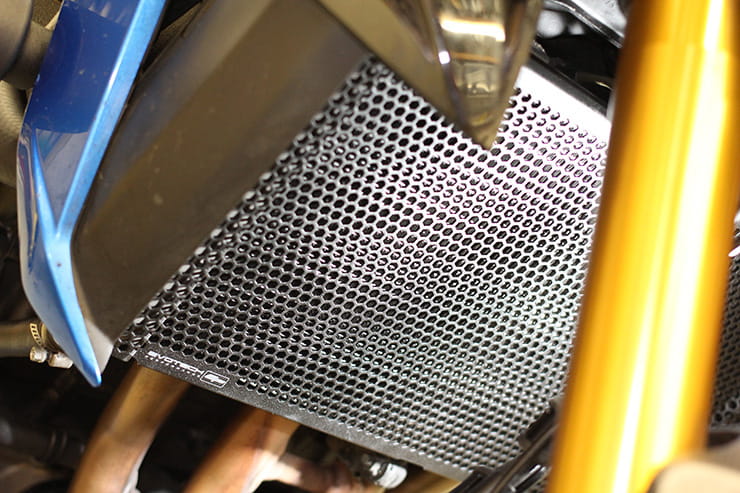 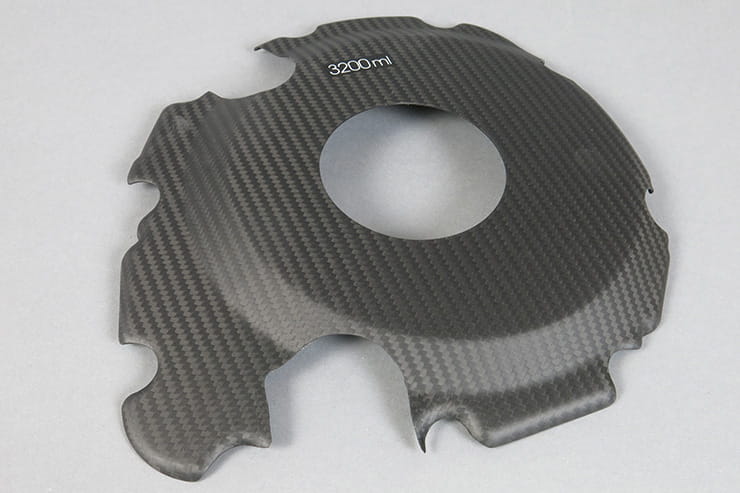 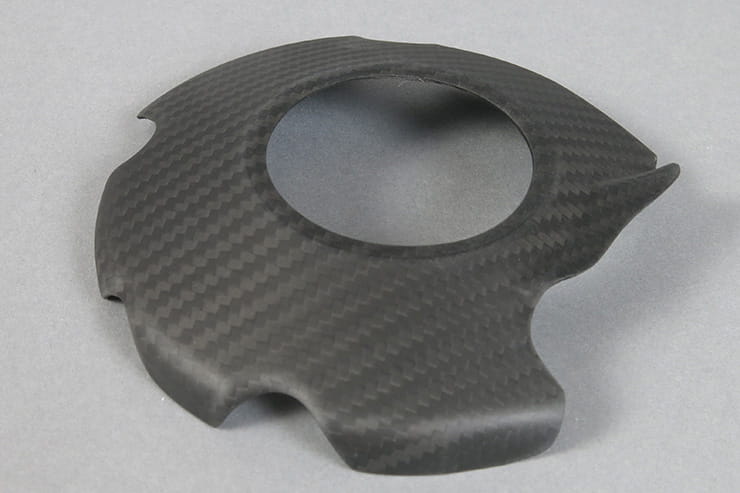 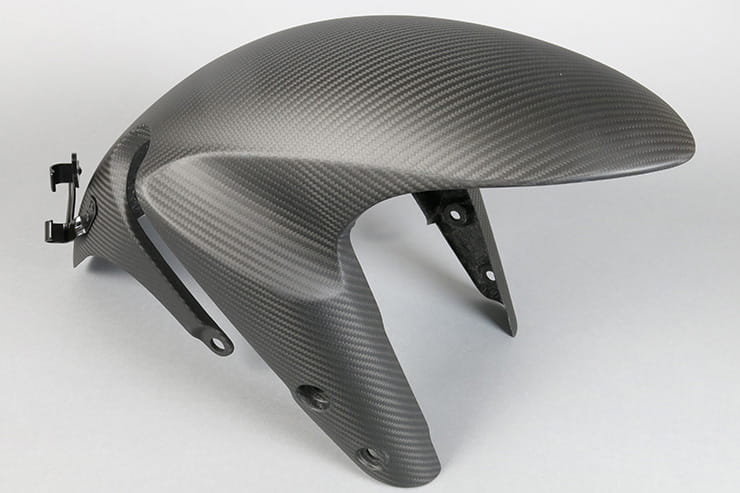 While the main pic at the start of this article showed the bike as it is now that I’ve stripped most things off, the carbon Suzuki accessories remain (the engine covers are stuck on). Expensive, yes, but this kit was exquisite; again, it might be worth bartering with your dealer if you fancy the beautiful front mudguard and case protectors.

As you can see from the first shot directly above, I also fitted a £120 Evotech Performance tail tidy – made of billet aluminium it looked superb on the bike, and really tidied up the back-end. This did of course let more rain spray hit my backpack when riding, but it was worth it.

The £54.98 Evotech Performance rad guard and variously priced crash protection all added to the machine, and were easy to fit and remove.

My brother-in-law, a riding instructor and passionate biker, had a go on the GSX-S; “I really like it,” he told me. “I love the riding position, which is much better than the Z800 I tried, and I prefer the looks of this to the Triumph Street Triple and the Yamaha MT-09.

BikeSocial’s Michael Mann, a sportsbike rider through and through, was impressed with the drive from this relatively low-powered machine (compared to the Honda Fireblade he had); “Bloody hell, that’s got some go” he once told me after a particularly spirited ride together…

Despite some niggles with the construction and finish, I’ve been thoroughly impressed with the Suzuki. I wouldn’t hesitate to recommend one, but I would suggest you pay a little bit of extra attention to the areas I’ve highlighted.

Overall, the awesome-sounding engine, easy handling and good price make this a great buy. 113bhp might not sound much these days, but you can really work this engine and enjoy it, rather than dancing nervously around the throttle of today’s hyperbikes.

Three things I loved about the Suzuki GSX-S750

• Tricky to load up with luggage