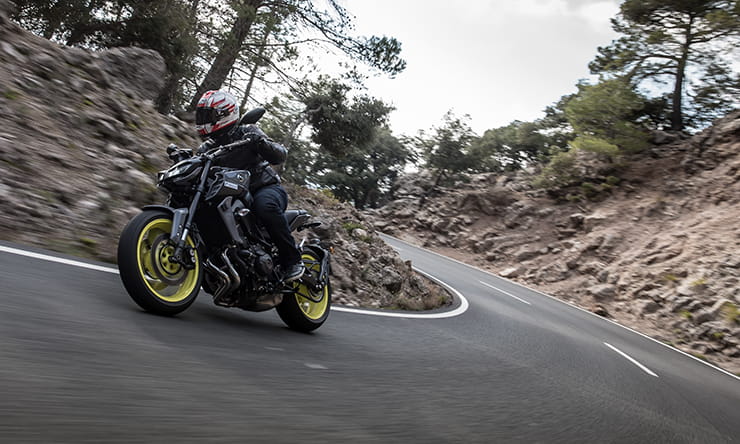 Yamaha’s MT-09 gets an edgy facelift, a compact bum lift and a smattering of technical upgrades for 2017 but does the all-singing, all-dancing street fighter get even better than the already popular predecessor? We sent BikeSocial Web Editor, Michael Mann, to the official Yamaha press test in Mallorca to find out.

The naked supermoto-style MT-09 has become a firm favourite and its power, torque, agility, not to mention highly attractive price point have created a winning combination for what surely has been the best value-for-money motorcycle of the last few years. The MT-09 has had £450 added to its price tag for 2017 with a revised cost of £7799, but having covered 150 miles of this Balearic Island’s finest, and on occasion slipperiest, roads the updates I’ll put my head on the block in only the second paragraph of this review and say they are worth every penny. It’s due in UK dealerships from the first week in January and will be available in three colours. 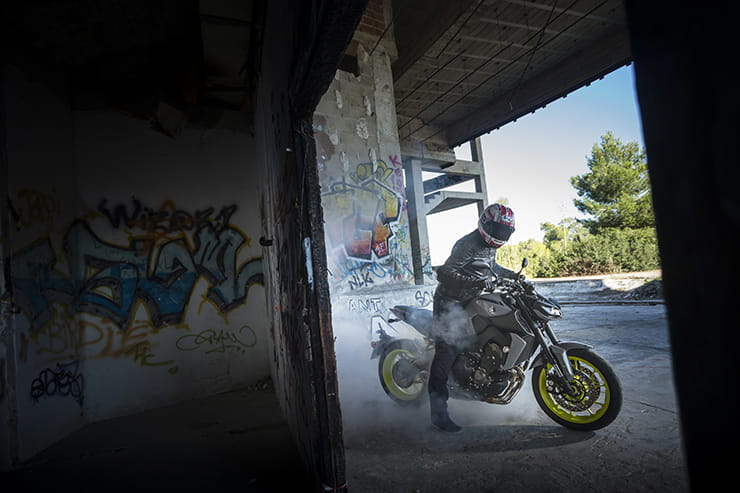 It’s hard not to rip the throttle back at every opportunity and soak up the noise.

We’ll dive into the upgrade details later on but essentially the design changes have been inspired so to match its older brother, the bigger, R1-derived MT-10. It’s more compact and aggressively styled, sportier and more ergonomic for both rider and pillion than the outgoing version. The other technology-related headline changes include suspension revisions and the addition of an Assist & Slipper clutch plus a factory-fit quickshifter for clutchless upshifts.

The all-conquering MT range from Yamaha made its first mark on the world in September 2013 and the Japanese firm have sold in excess of 115,000 bikes since, across the whole MT range from 125, 03, 07, 09 and 10 plus the individual model variations. It would be fair to say that the MT range has been key to Yamaha’s resurgence in recent times. In fact, there are statistics that back that sentiment because Yamaha’s market share is now 16% compared to 10.2% in 2013 and almost every other bike sold by Yamaha in 2016 has been from the Hyper Naked category.

What’s new and what’s not new?

Without question the 3-cylinder, 847cc engine is the model’s crown jewel. Never have I wanted to swear more in a review to accentuate the epicness of a piece of technology but the 113.5bhp triple is rammed full of energy and character, and thankfully remains untouched. It remains the heartbeat and the essence on why the MT-09 is such a good all-round motorcycle.

Mechanically, the engine remains the same. It’s compact and lightweight, has forged aluminium pistons, offset cylinders (by 5mm) and a high compression ratio with a 120 degree crank plus a wide, linear torque band all helping to deliver a rewardingly audible howl from the restyled, Euro 4-compliant exhaust. But it’s not all mouth and no trousers, max torque of 64.5 ft-lbs at 8,500rpm is far enough around the rev band towards the red line of 11,300rpm to offer sufficiently exciting acceleration as well as complimenting the bike’s gearing. Second and third gear are like best friends for life and will accomplish many things together - from a low down pull out of a hairpin to thrashing purposefully towards motorway speed limits and beyond, maybe. With such a lively engine that is ideally matched with the raspy triple, it’s hard not to rip the throttle back at every opportunity and soak up the noise.

Sub-114bhp isn’t going to peel skin from face but the engine has been tuned to show its colours in the form of linear torque delivery so whatever the situation, acceleration is going to be entertaining – from a standing start through to 6th gear roll-ons. It’s a really useable engine and doesn’t need overworking. Easy to manoeuvre through back streets with a softer throttle action in the ‘B’ rider mode for example – ‘A’ would be on the twitchy side of sensitive for the wetter or narrower streets. Of Yamaha’s D-modes (or rider modes), ‘B’ cuts power by 4bhp and softens the throttle action. ‘A’ mode for me is a little unnecessary and even on the quicker, dryer, more flowing roads, the middle option of the three, unfortunately titled ‘STD’ is the one for me. The front wheel will lift with ease in any mode, intentionally or not.

The MT-09 has a magnetic personality that you just want to get to know and the bike is equipped with typical Japanese manufacturer reliability which makes it an even better friend.

It would be easy, perhaps even foolish to review this, the latest incarnation, on the basis that everyone reading this has ridden the original but if you’ve not swung a leg over an MT-09 then I’d certainly encourage a test ride – it would be time well spent. The seating position below the waist remains sporty enough to convince you that it’s a match for a supersport off the line which, with it’s low down grunt, it probably would be. With foot pegs directly below the centre of the saddle and offering plenty of ground clearance, the knees are thrust into the fuel tank surround. The revised, flatter and 5mm higher seat (now 820mm) feels less pitched forwards than before so the riding position becomes more comfortable particularly for longer journeys. Between breaks I covered 150 miles on the Yamaha press launch and not once required a leg-stretch, and I’m 6ft and a shade over 14 stones (183cm and 90kg) incidentally. A comfort seat is part of the optional accessory line-up and features a steeper step up to the pillion seat. I have no complaints about the standard version which is also narrow enough at the waist where it meets the fuel tank to offer the shorter rider a decent and solid stance when stationary. The flatter seat also helps with less sliding around under hard acceleration or braking.

The wide, upright handlebars are home to a decent set of rear view mirrors and also worthy of note, a small indicator button, which was very easy to find without looking and use but I was in summer gloves and can imagine a trickier affair in thick winter weight gloves. The three-stage traction control spring-mounted switch is also on the left side and a rider mode toggle button on the right – both of these now have a memory function so once set will remain when the ignition is turned back on, unless you’ve switched off the Traction Control completely. It’s a tidy system too which was put to the test on the damp roads, Of the three settings, including ‘Off’, I stayed in ‘1’ most of the time which is the least intrusive of the remaining two options. 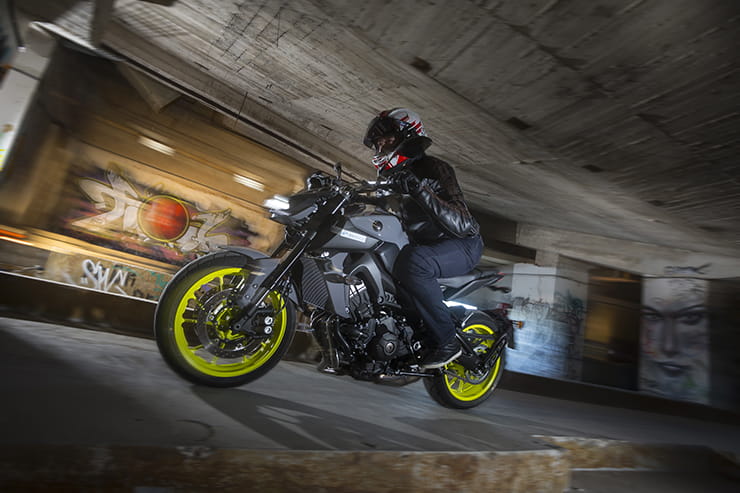 Bridgestone’s Battlax S20 tyres are fit for purpose and coped with the bike’s torque as well as my enthusiasm to use it in the tricky conditions. The brakes are strong and together with the upgraded and fully adjustable suspension, both front and back, the older issues with stability under heavy braking have been well and truly ironed out. Its inverted 41mm forks now feature a new compression damping adjuster in the left fork tube, while the existing rebound damping function is located in the right tube. Yamaha say their standard suspension settings are based on a rider who is 175cm tall (5’7”) and weighs 75kg (11st 8lbs). As I’m a little taller and heavier, the ‘press settings’ of slightly stiffer rebound and preload plus four clicks of compression in the front were well suited for me.

The MT-09 remains a hyper naked in Yamaha’s eyes while its characteristic-enhancements have improved the sports feel to the bike.

The front turns quickly enough and the beautifully balanced and agile Yamaha chassis does a more than competent job but I can’t help wonder what affect it would have if the MT-09 did go on a diet and loose a few kg’s. Not that 193kg (wet) is considered heavyweight by any stretch.

To further improve the performance side, an assist and slipper clutch has been added which Yamaha say means “20% reduction in lever effort”, I didn’t notice any reduction but the bike was steady enough when using engine braking and downshifting. A quickshifter fitted as standard is another key upgrade on the new generation MT-09; I’m a big fan of these racing-derived gadgets and can’t get enough of changing gear as a result. Yamaha’s version only works on the upshift which become clutchless. They don’t have to be and the system can even be switched off but what it doesn’t do is work on the down-shift, therefore nor does it have an auto-blipper. The system isn’t the most salubrious I’ve ever used but then the MT-09 has been built to represent excellent value-for-money and any more of an advanced version would simply push the price up.

It’s smooth and fast like a quickshifter should be and complements the engine note well. The wider the throttle is open, the smoother the gear shifts are although I always reverted back to using the clutch when moving from first to second, sensible when moving slowly.

The LCD instrument panel has been set further forward to improve the line of sight as well as being able to read the rev counter numbers, something I’ve noted that wasn’t ideal on the previous model. It’s moved because of the design upgrades to the front end of the bike which may well divide opinion. So far, I’ve heard it being referred to as Wall-E, Johnny Five and even that small-headed chap from Beetlejuice but the new symmetrical twin headlight with four separate LED face bears more than just a passing resemblance to the MT-10.

Moving backwards and larger tank-mounted air scoops, under headlight winglets and radiator sidefins are all enhancements to improve look and aerodynamics. The indicators have been relocated lower down too.

A new design for the sportier and more compact rear end includes a rather garish aluminium single sided registration plate holder and light. While the subframe is 30mm shorter, the pillion seat is actually larger. 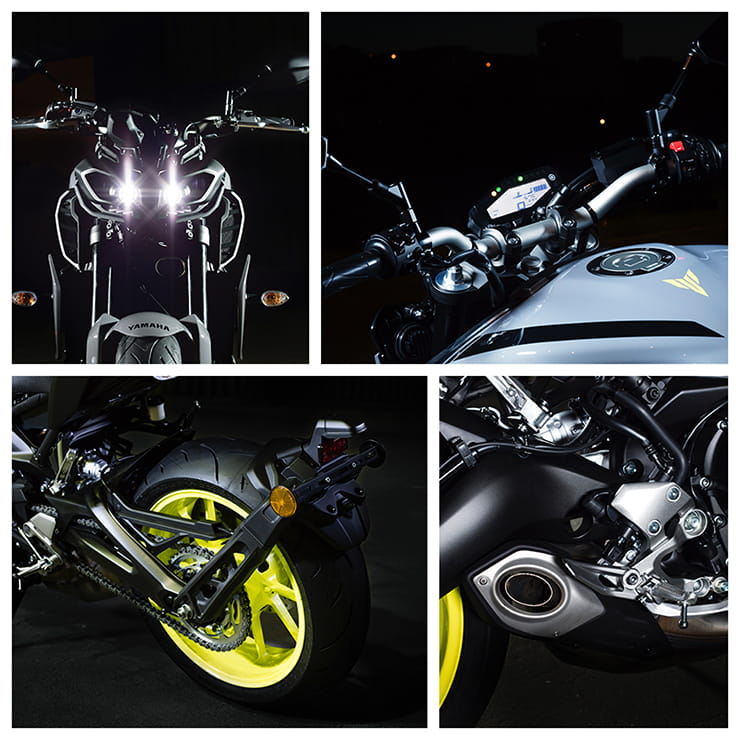 There aren’t many naked bikes that spring to mind for their good looks, except maybe Aprilia’s most recent Tuono V4 but the MT-09 is looking better after its styling makeover, and because everyone is entitled to their own opinion, here’s mine; I’d have the small sport screen on there straight away plus the comfort seat and the original licence plate hanger. Oh, and probably the full Akrapovic exhaust system if I was feeling flush.

Yamaha have made an already great bike even better and the MT-09 will continue to be a top seller because it offers so much variation in one package; a sports bike you can go to the shops on. A commuter that could hold its own on a track day (maybe Cadwell instead of Silverstone) and with such a sprightly motor in a terrific chassis all wrapped in a budget-friendly price tag, I think Yamaha will be patting themselves on the back.

A sub-£8,000 bike with this much character and feel-good factor offers great value in my book. It’s main rivals on paper would include MV Agusta’s Brutale 800, Ducati’s Monster 821 and Triumph’s Street Triple, although we understand a new 800cc version is coming very soon which should bring it closer to the MT-09.

Yamaha’s 2017 MT-09 is available in dealerships from the beginning of January 2017 in three colours; Night Fluo, Race Blu or Tech Black. 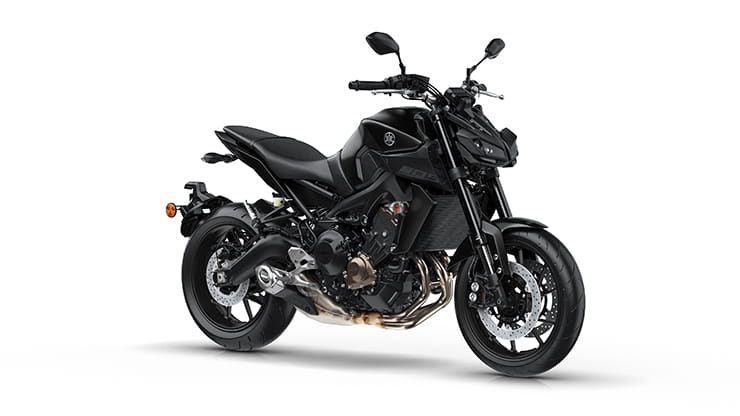 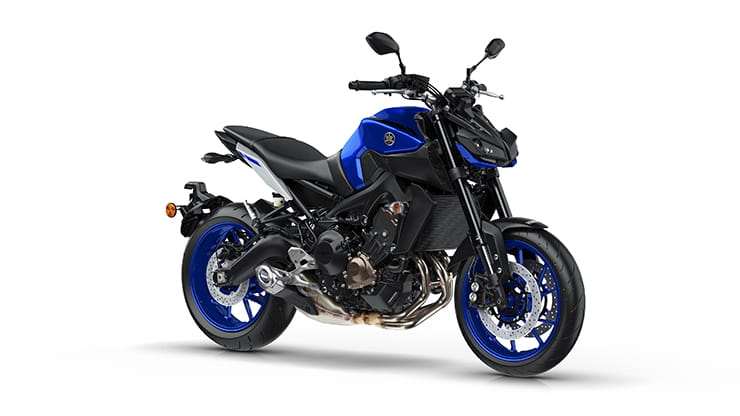 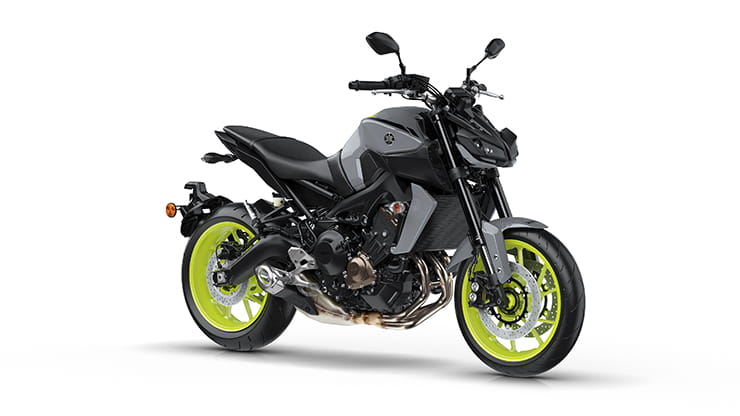 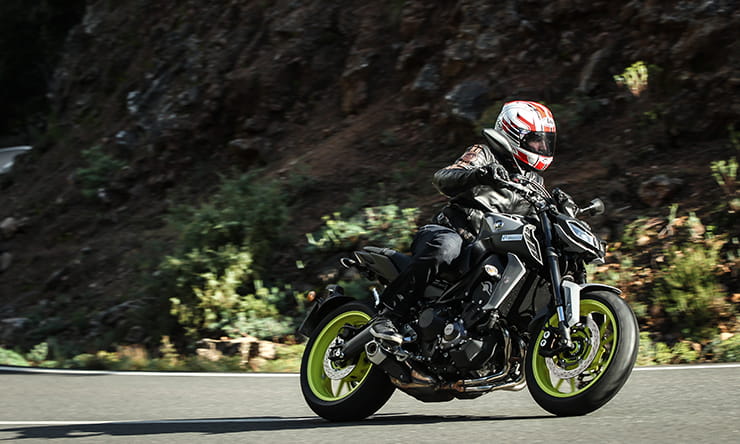