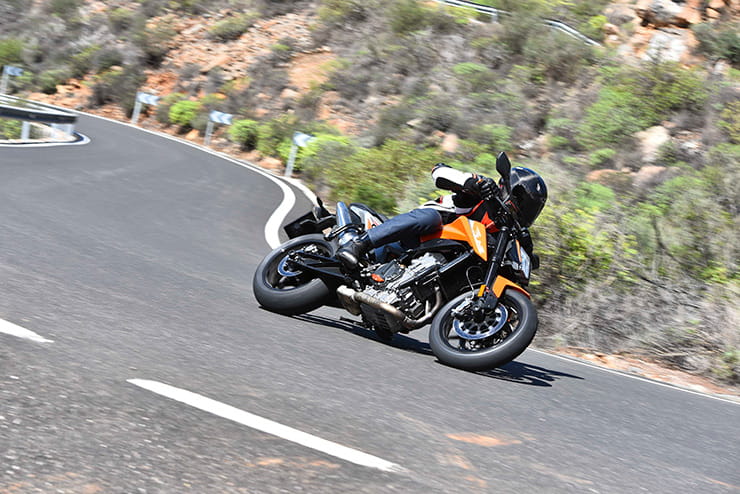 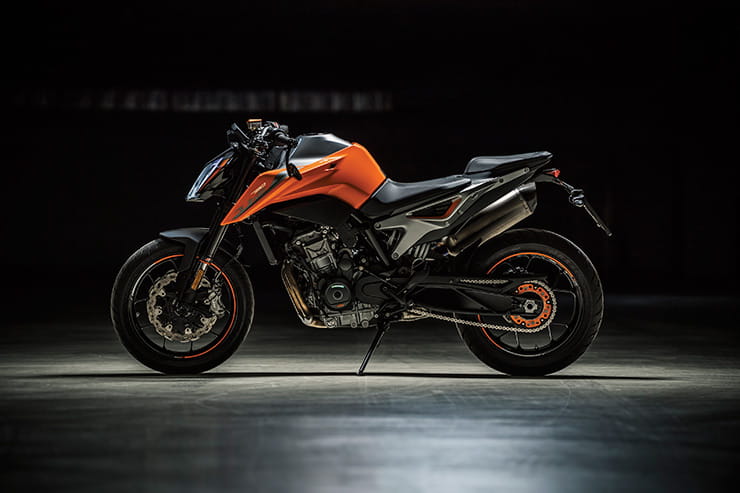 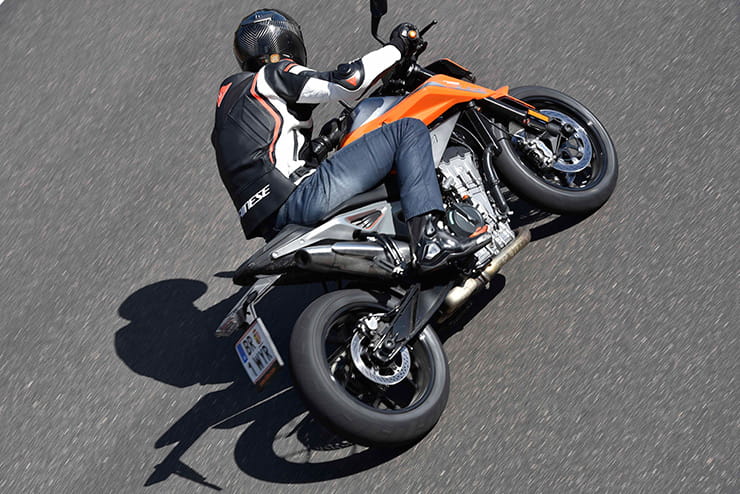 The 790 Duke is a hugely important bike for KTM – not just a new model but the start of a whole new middleweight platform. With its typically sharp-edged lines, the 799cc parallel twin fills the large gap between the 690 Duke single and 1290 Super Duke V-twins in the Austrian firm’s streetbike range, and will be the starting point not only for other KTMs including an Adventure model – due in a year’s time – but for sister brand Husqvarna too.

And the Duke is significant not only to KTM, because it brings a whole new level of electronic sophistication to the middleweight sector. With a maximum power output of 105bhp and a wet weight of just 174kg, it’s very much a mid-sized motorbike. But as well as a TFT display and two-way quick-shifter as standard, it features electronics previously seen only on bigger bikes, including IMU-controlled traction control and cornering ABS. 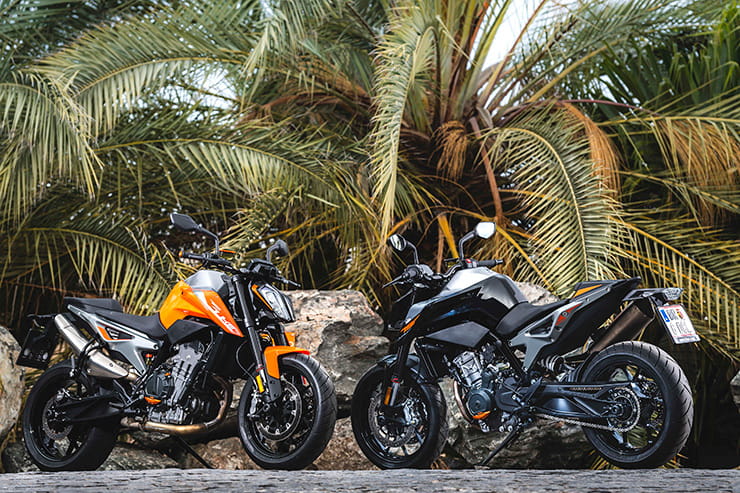 KTM is intending the 790 Duke to be a serious volume seller in the way that the 690 Duke never has been, and it’s priced at £8499. That means the Duke costs slightly more than the least expensive versions of rivals including BMW’s F800R, Triumph’s Street Triple and Kawasaki’s Z900 (Yamaha’s simpler MT-07 is a different story), but looks very competitive when those models are upgraded to a remotely comparable level. 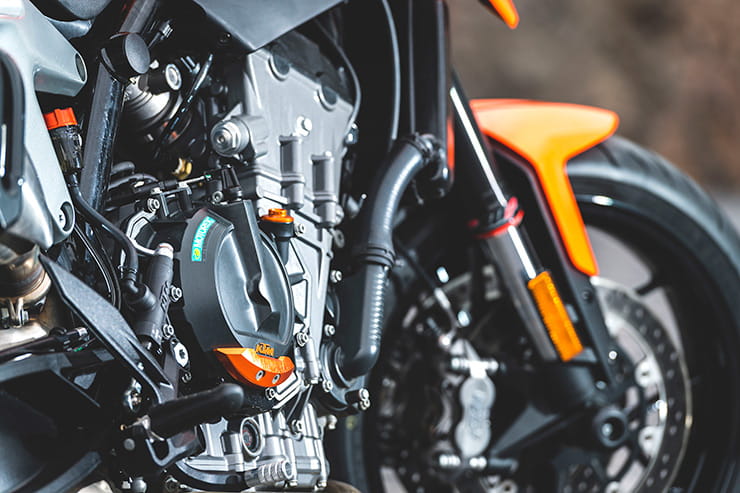 KTM considered a mid-sized V-twin before settling on a dohc, eight-valve parallel twin. “In the bigger capacity class the V-twin is the better concept, as you see with the Super Duke and other manufacturers’ bikes,” says Peter Gorbach, the Austrian firm’s head of engine development. “But in the smaller class a parallel twin has more advantages, because our main goal was to get the engine as compact as possible.”

Vibration was a potential issue with a parallel twin, so Gorbach’s team used two balancer shafts, one at the front of the engine and one in the cylinder head, as they had previously with the single-cylinder LC4 unit. “The other thing we had to decide was the firing order. This was a matter of heritage, because we wanted to have the same sound as the 1290, so a 75-degree V-twin.” The solution was to have the crankpins offset by 75 degrees, giving a distinctive character and exhaust note. 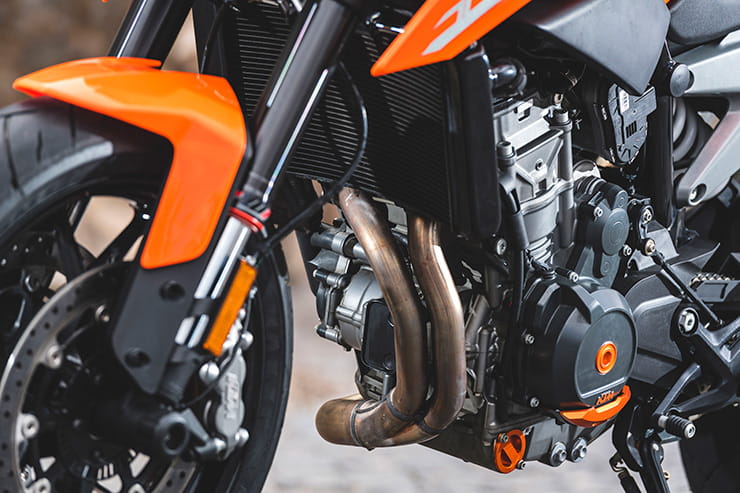 Maximum power is 105bhp at 9000rpm, with the peak torque figure of 86Nm generated at a relatively high 8000rpm. But the majority of that torque is available from 3000rpm, and more than 80Nm from below 6000rpm.

On the road, on the launch in Gran Canaria, this translates to a superbly responsive, sweet-revving bike that is more than quick enough to be hugely entertaining, yet is also very rider-friendly and economical. The Duke pulls cleanly from 3000rpm or below, and has a lovely crisp throttle response in both Street and the slightly sharper Sport modes (Rain cuts power; Track is sharper still and still by no means snatchy).

A quick burst of acceleration is enough to put over 100mph on the digital display, heading for a top speed of about 140mph. The Duke is sufficiently smooth up near its 9500rpm redline that vibration is never an issue. The two-way shifter is superb, in combination with a six-speed box that I found very light and positive, although a couple of riders mentioned the occasional missed change or false neutral. 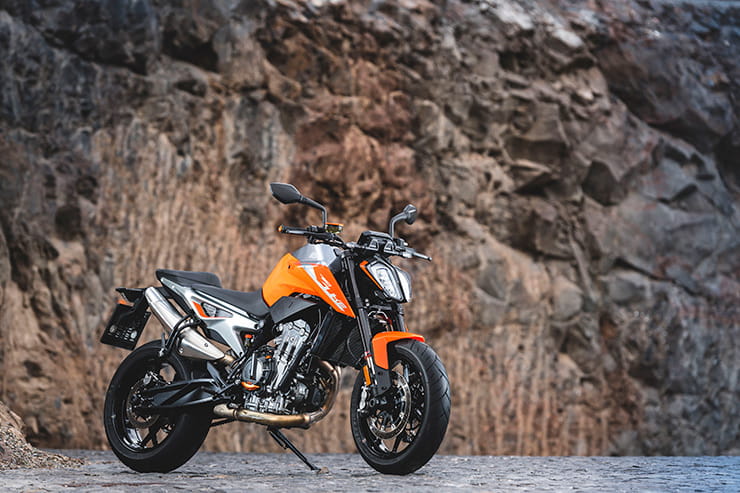 One pleasant surprise was the engaging character and exhaust note. Less welcome was the Duke’s slightly erratic progress when being ridden slowly through villages on a constant throttle. This wasn’t a problem on the launch ride, which mostly avoided built-up areas, but might be more of an issue when commuting through the city. Economy, on the other hand, is excellent: over 50mpg despite plenty of enthusiastic throttle use, to give a range of around 150 miles from the 14-litre tank. 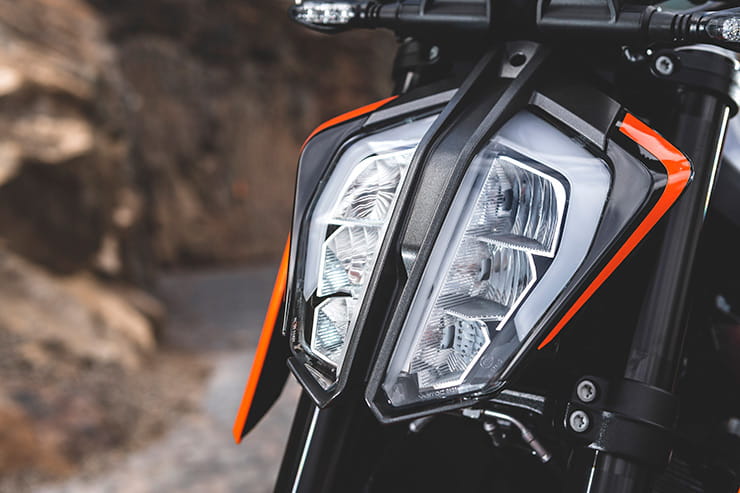 KTM tradition dictated a tubular steel frame (as used even by the firm’s MotoGP racer), which employs the engine as a stressed member. The rear subframe is made from aluminium, and encloses the airbox, which has intakes on either side below the seat. Steering geometry is pretty steep, with 24 degrees of rake and 98mm of trail, allowing a short wheelbase of just 1475mm.

One area where KTM have compromised to keep costs down is with the suspension, which comes from the firm’s own specialist WP. The 790 has 43mm upside-down forks and a rear monoshock, with the shock’s preload providing the only adjustability. The front brake combines twin 300mm discs with four-pot radial calipers from Spanish firm J.Juan. The 17-inch cast aluminium wheels wear tyres from another less familiar name, Maxxis, in the form of Supermaxx SP rubber designed for sport-touring. 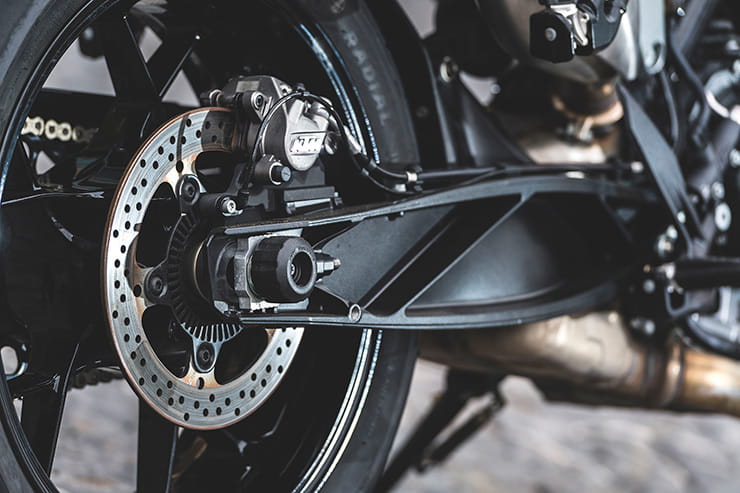 If my pre-ride doubts about the engine were mostly whether it would feel sufficiently exciting, my concern about the chassis was whether the basic suspension spec would allow the handling to be as sharp as it should be from such a short, light bike, especially given the generous travel of 140mm front and 150mm rear.

The 790 put those to rest when slicing nonchalantly through the first set of bends, and spent the rest of the day confirming that KTM’s development team got their suspension calibration spot-on. Shame they didn’t specify a remote preload adjuster for the shock, which would be especially useful when carrying an occasional pillion. I thought the front brake provided plenty of power and feel, although one rider, who uses only two fingers, reckoned the lever required too firm a squeeze. 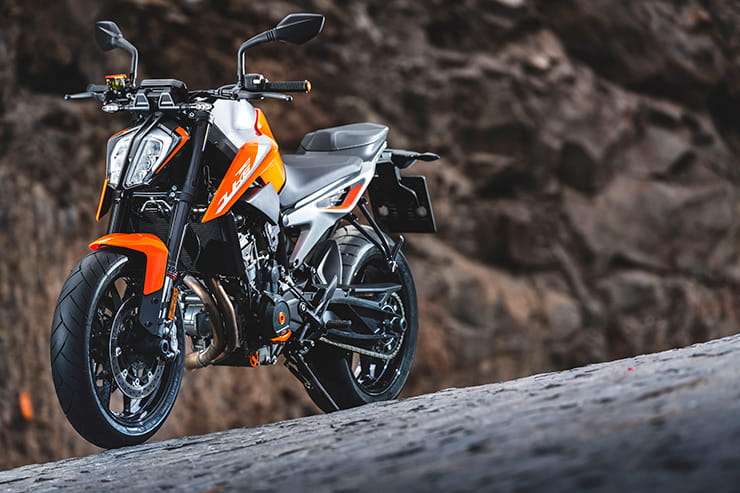 You don’t need to be told that this sharply styled bike is a KTM, even when it’s finished in grey and black rather than the trademark orange. The Kiska studio’s design fits right into the Duke family line-up between the 390 and 1290 Super Duke R, and incorporates plenty of neat touches including LED lighting and a full-colour TFT display activated by an updated version of KTM’s familiar four-button switch on the left bar.

Pressing the Down button switches the display to show more detail of trip, fuel-consumption and other functions, while the Up button allows the rider to choose from the four engine modes. Street and Sport give the full 105bhp with alternative throttle response; Rain cuts power; and Track provides additional functionality, including one-touch adjustability of the traction control level, plus the option of disabling the anti-wheelie function. 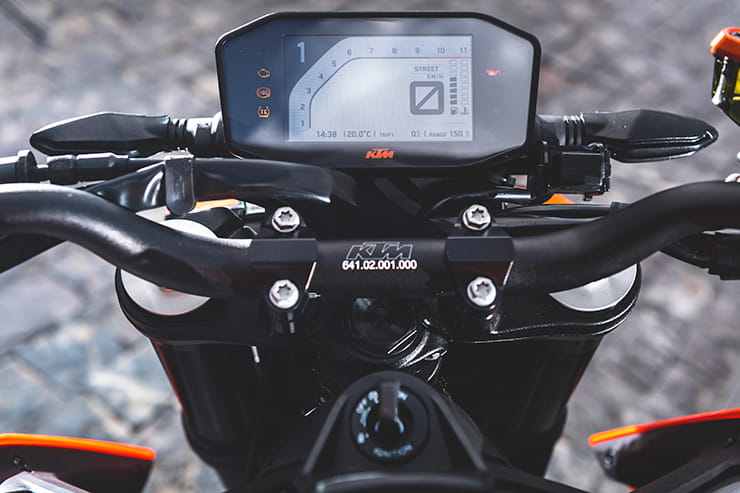 Those electronic functions come courtesy of an Inertial Measurement Unit like that of the firm’s V-twins. Along with the nine-way adjustable traction control, this allows cornering ABS, plus a supermoto set-up that disables anti-lock on the rear wheel.

The one-piece, near-flat handlebar can be adjusted, by reversing its mounts. Despite being tall I found the bike fairly roomy by middleweight standards. It’s also pretty well specified, with LED lights, useful mirrors, adjustable levers and an illuminated menu switch, though curiously not self-cancelling indicators. The fact that I’m resorting to criticising a naked middleweight for that emphasises how thoughtfully detailed it is.

The seat was beginning to feel slightly firm by the end of the day, but comfort seems reasonable. For short riders there’s a 20mm lower seat and a chassis kit that drops it by another 25mm, to 780mm. Other extras include carbon front mudguard, adjustable rearsets, seat hump and Akrapovic silencer. 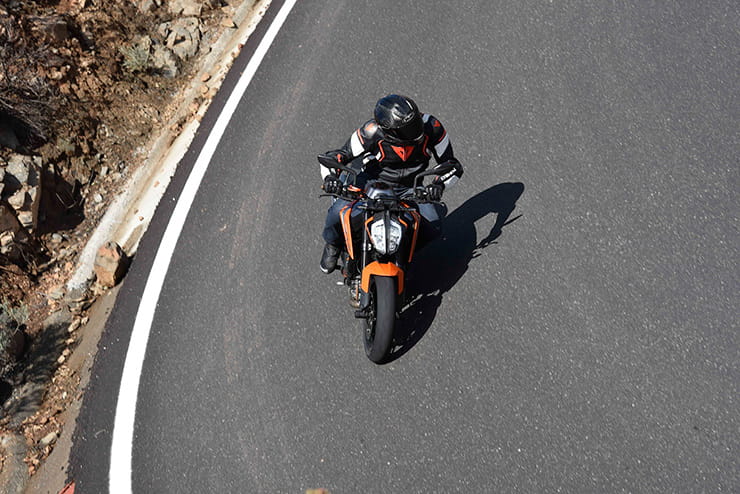 The 790’s suspension, tyres and brakes all gave a very decent account of themselves when we hit the Maspalomas circuit for a brief thrash after lunch. Sure, the ABS activated in a few places every lap, and both ends felt slightly vague as the suspension and tyres approached their limits. (Some adjustability now would have been nice.) But the Duke could be ridden impressively hard without getting out of shape or threatening to do anything nasty, which for a relatively inexpensive middleweight was very impressive. 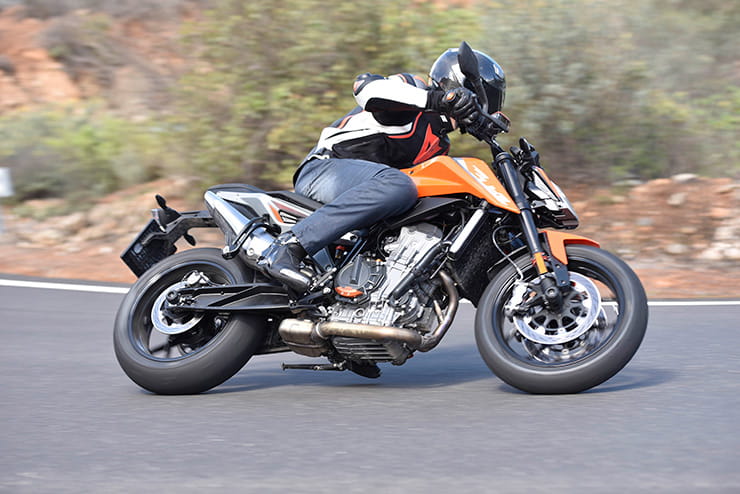 KTM have made a big effort to enter the middleweight class with a splash, and the 790 Duke does exactly that. Its basics are spot-on: the parallel twin engine is responsive, eager, smooth and has plenty of character; the chassis is light and agile. The whole bike is very rider-friendly and respectably practical, yet way more involving than you might expect of a 105bhp parallel twin.

The Duke also brings something new to the division, with its aggressive style and unprecedented level of sophistication. Combining such sparkling all-round performance with a TFT display, two-way shifter and cornering ABS, and for £8499, looks sure to make it appeal to a wide range of riders.