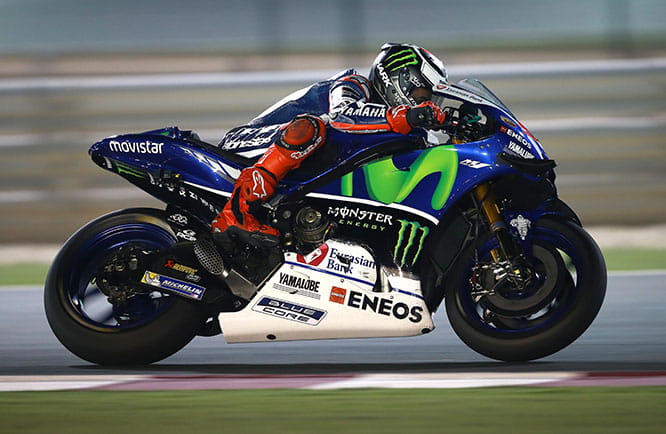 Under the clear night skies of Qatar, world champion Jorge Lorenzo lit up proceedings at Losail by smashing the lap record  with a 1:54.810 lap. The Spaniard laid down a marker to the rest of the MotoGP field, while Britain's Scott Redding showed that he can be a force to reckon with this season after finishing second on his Ducati.

Lorenzo ended the three day test comfortably fastest and while his headline grabbing time will have left his rivals concerned, it is his sheer consistency throughout the week that will have left them scratching their heads and looking for answers. Valentino Rossi, Lorenzo's teammate in the factory Yamaha team, had another crash tonight but made some inroads on reducing the gap to Lorenzo throughout the evening. The Italian legend eventually set the fifth fastest time but was still over six tenths of a second off the champ's pace.

Despite holding a half second advantage to the field, Lorenzo he declared that there's still plenty more to come.The reigning world champion was pleased with the potential of his bike and the Michelin tyres but a problem with the tyre graining during a race simulation yesterday meant that he was forced to use a harder compound today and he felt that it limited his potential on his 22 lap stint and cost him five tenths of a second per lap throughout the stint.

He said: "Today we tried both tyres on the front and rear and I knew that the softer solution on the front was the best way to make a fast laptime. For our race simulation we had some problems with the tyre and we had some graining. I made the race simulation with the harder front tyre and that wasn't the best solution to go fast but it was better than yesterday's simulation and it was a complete race run. I think that if I didn't have the problem with graining I could have been faster and had a pace of mid 55s but unfortunately that wasn't working after some laps."

Lorenzo confirmed that having spoken to Michelin that the allocation for the opening round will include the softer compound that he encountered problems using but said that Michelin need to be adaptable to the needs of the field and as a result he understood their decision, adding: "After speaking to Michelin they said that they were planning on keeping the tyre that I made my race simulation with. Some riders used the soft tyre for their simulations and were OK but I used it yesterday and I didn't like it as much. I saved a hard tyre for today and referred it."

With his single lap pace looking assured in Qatar, using the softer compound front tyre, Lorenzo will have to focus on getting as much as possible from the harder compound in the race, because while there is a clear advantage to the field tonight in the race it will likely be very different when the riders line up for the opening race at Qatar in just over two weeks' time.

Second placed Redding was the leading Ducati and the form of the Briton this week will mean that he'll head to the start of the season feeling exceptionally confident about his chances, especially as the Losail circuit has been a happy hunting ground for Ducati in the past.

After a disappointing campaign on the Honda last year, Redding has been a changed man over the winter and from his first tests for the Pramac-backed team the Bike Social-backed 23-year-old has been relaxed, jocular and confident. Speaking after the test, Redding set his sights on a top six finish in this month's opening race, commenting: "For the Qatar GP when I said that my goal is the top six people started to laugh but I'm proving to be able to stay at that level and I will try to do even better.

"I wanted to push hard to see my potential. At the beginning we struggled a bit with the new tyres but things improved later in the day. Today I was strong with the new tyre but I set my best time on lap 10, with a tyre that had 15 laps (on it) already. The race is not much longer (than that) so I am very happy. I feel that the confidence is coming. In these days we also had two bikes and this gave me the opportunity to push without having any worries."

Redding's confidence is in stark contrast to his previous running mates on the Hondas, with the Japanese manufacturer once again struggling in Qatar. 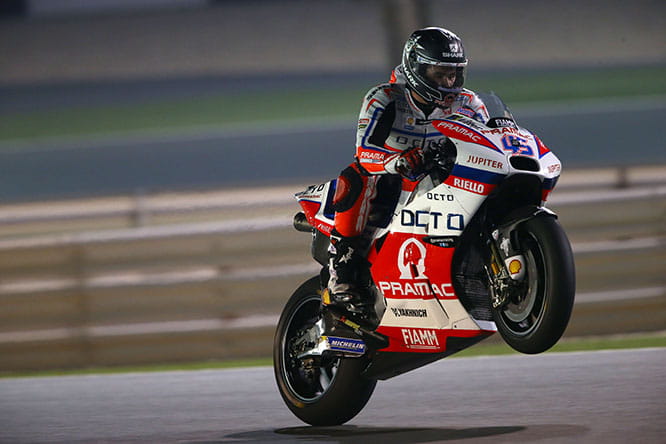 Having had a competitive Phillip Island test, where team personnel were adamant that the issues of the RC213V had been solved, Qatar has once again exposed the deficiencies of the bike and, despite Marc Marquez setting the fourth fastest time late in the day, it's clear that the bike is still far from perfect.

For most of the day Marquez and Cal Cruthclow were languishing down the order before improving in the final hours. Crutchlow crashed late in the session but the Coventry rider was comfortably faster than the remaining Honda riders.

Dani Pedrosa, Tito Rabat and Jack Miller all ended in the bottom half of the times and after nine days of pre-season testing the evidence is mounting once again that there is still plenty of work for Honda to do to solve their problems. Time is running out and with engine configurations locked in for the season once the Qatar Grand Prix weekend starts the manufacturer will have plenty of work to do as they continue to understand the limitations and potential of the unified engine software brought in for the 2016 season.

Over at Suzuki, Maverick Vinales carried forward his strong form from Phillip Island to make it four different manufacturers in the top four places, setting the third fastest time overall. The Spaniard was surefooted and confident throughout this week and having been so strong in Australia it was important for Suzuki to prove that the GSX-RR was competitive at a very different circuit. Vinales form has once again piled the pressure on Aleix Espargaro and, with the more experienced half of the Suzuki pairing struggling, it's clear that when the season starts at this very circuit in two weeks time that the competitive balance within the garage will have shifted towards Vinales.

While Redding and Crutchlow were able to set times for the top ten Bradley Smith had to settle for the 12th fastest time on the Tech 3 Yamaha. Eugene Laverty ended the three day test in 20th place on the Aspar Ducati.