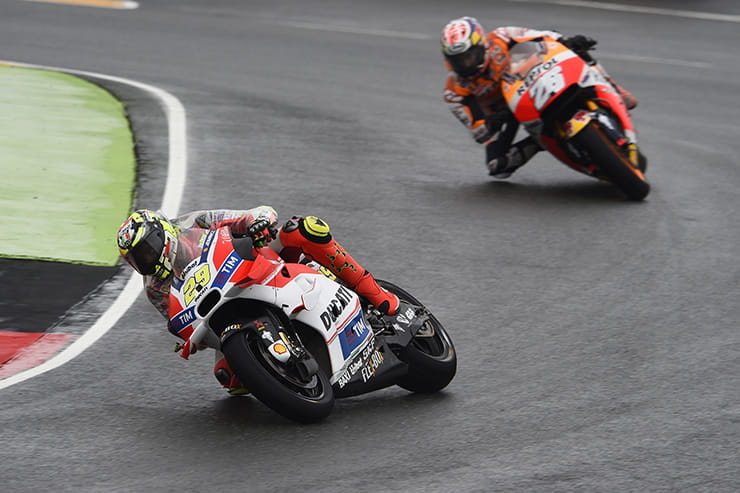 As the summer break draws to a close, the MotoGP circus heads to the new Red Bull Ring for this weekend’s Austrian Grand Prix, a race that could potentially be the fastest in MotoGP history.

With a strong result for all the Ducati riders during a two-day private test at the circuit last month, which saw all but two of the top ten places filled with a Ducati, the track could provide the Italian manufacturer with its first win since Casey Stoner pulverised the opposition at Philip Island in 2010. Maximum speed comparisons from the season’s other high speed venue, Mugello, saw Desmosedicis fill the top six places at the top of the speed trap charts and, with the Austrian circuit demanding good top speeds, this weekend could well represent Ducati’s best chance of success this year.

The high speed layout means that Michelin will bring two new compounds to the race. The track has only two proper left handed corners matched to seven rights. To counter this, three front slicks will be taken to the circuit, soft, medium, and hard, to give the riders maximum flexibility over the race weekend. This, along with two new asymmetric rear slicks that feature a harder right shoulder to deal with the number of right handers should mean a safe race for all.

“The Red Bull Ring is going to be a completely new experience, not just for Michelin, but the whole paddock as no-one has raced there before in MotoGP,” said Michelin boss Piero Taramasso. “It is an interesting layout with just two left-hand corners and only seven rights, hopefully we won’t have all the weather issues we have had in the last two races, but if we do we will be ready for whatever comes our way.”

One rider who has excelled on all types of circuits and conditions is Repsol Honda star and championship leader Marc Marquez. His scintillating rides in Assen and Sachsenring see the Spaniard 48 points clear of countryman Lorenzo. The Repsol Honda team was absent from the recent test in Austria, although Marquez and teammate Dani Pedrosa did sample the circuit on Honda RC213V-S machines at an event in June, He said, “I really look forward to getting back to racing my bike. I had the chance to enjoy this amazing track twice, even if I wasn't riding my factory bike and of course I couldn't push as much as I like.

“Some things about it remind me of Austin in that you have to brake very hard and stop the bike and turn quickly, I think it’s a good track for the world championship and I can’t wait to ride there with a MotoGP bike.”

Ultimately any rider not on a ‘red bike’ is going to have a tough time and it would be a massive shock for a Ducati not to feature somewhere at the top of the order.

Watch out for our own Scott Redding who will be looking to build on a string of impressive if unlucky results in the run up to Summer break following a third and a fourth place finish at the mainly wet races at Assen and Sachsenring respectively.

He told Bike Social about the Red Bull Ring, "It's a good track layout, really up and down. I like it. There will be some good racing but it could be a little dangerous in some areas. My target is top eight unless there are some different conditions."

Follow all the action live on BT Sport starting with free practice on Friday morning, with Sunday’s MotoGP race show from 12:45.