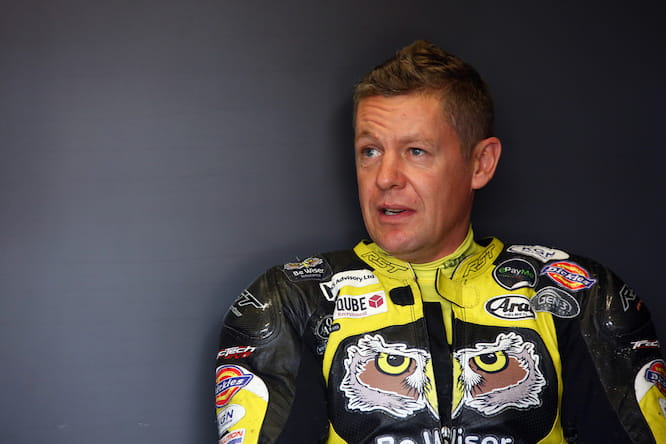 British Superbike legend Chris ‘Stalker’ Walker will miss the final round of the series at Brands Hatch this weekend but vows to return next year for ‘one final season’.

The decorated BSB star found himself without a ride when the Be Wiser Kawasaki team folded ahead of Silverstone and while team-mate Danny Buchan was able to find refuge at PBM, Walker was unable to secure a ride for the final two rounds.

The 40-something-year-old did receive an offer from Honda to stand in for the injured Jason O’Halloran but had to turn it down because of his strong relationship with Kawasaki.

However, Walker says he’s keen to be back on the grid for one final season in 2016 aboard Kawasaki’s new ZX-10R.

“It’s been a tough few weeks since I got the call to say the team was done for the season,” said Walker on his Facebook page. “I did however get a phone call from Honda last week to offer me the spare seat alongside Linfoot for Brands which was awesome and very flattering, but with my involvement and long term relationship with Kawasaki, plus the fact I’ve recently opened my Chris Walker Kawasaki dealership in Grantham, I had to say no to one of the best rides in the paddock.

“Unfortunately nothing else has presented itself so that’s it for the Stalker for 2015, but you will be pleased to know I’ve asked Stuart Higgs, race director for the British Superbike Championship to hold on to number 9 for me for now. I’m down but not out and will push to be back on the grid again in 2016 for one final season of BSB aboard the awesome looking new ZX-10R.”