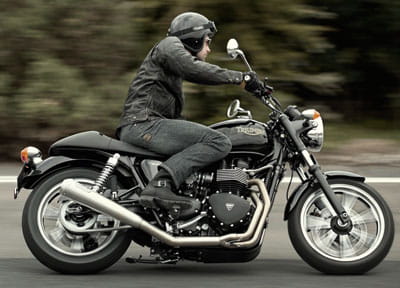 Triumph Bonneville: the brand and model name everybody with a smidge of biking in their blood knows. Quite rightly so because the Bonneville was the stable diet of motorcyclists for generations – as it is now.

What the Bonneville is today is a stylish reminder of years gone by. Everything about it is thoroughly modern apart from the name. The 865cc parallel-twin engine is oil-tight and starts on the button every time. Modern electronics and fuel delivery by injection play a big part in this everyday occasion and also ensures a flat, fault-free power and torque performance curve.

The twin megaphone silencers are only a tribute to older times. Emissions regulations have enforced noise output to be socially acceptable – not that anyone had a bad word against our local vicar’s 1962 free-breathing Bonneville. But you get an inkling of what could be when the throttle tube’s twisted fully open on the A68. The dated styling exercise is also applied to the carburettors – they are carb shells with no mechanical guts only modern fuel injection bodies. That’s a clever touch.

Speed is not a simple by-product of the engine because it isn’t endowed with great power. 85-90mph rides are easily achievable but that’s not the point of ‘Bonnie’ ownership; the idea behind a ‘Bonnie’ is to enjoy the ride. The fact it is a basis for interesting ‘specials’ is another story.

Sat astride a Bonneville gives a tremendous feeling of pride because of the heritage involved. Everything about the bike is geared to be faithful to the former glory days. The components that aren’t, have been changed for a reason. Take the front and rear disc brakes, while not racing specification they are far cry from drum brakes and early disc set ups. A good squeeze of the front brake lever does stop the bike but it really needs assistance from the rear brake for all out emergency stops.

Handling can only be described as acceptable for what the Bonneville was designed to do – get to B from A in a gentlemanly way. Normal riding shows the front forks to be soft under braking but good enough to give feel and reduce the clattering effect of badly surfaced roads.

The rear shocks are fine but an extra notch of rear preload to stiffen them up helps maintain an even keel stance and not slow down the steering. Only when a Bonneville rider is enjoying his or her ‘freedom’ will the dated tubular frame and weight conspire to introduce a mild weave in protest, and this only usually happens when the rubber-sheathed footpegs are scraping tarmac.

+ points – modern slice of history. Stylish and reliable.
- points – take the Bonneville at face value and there isn’t any.