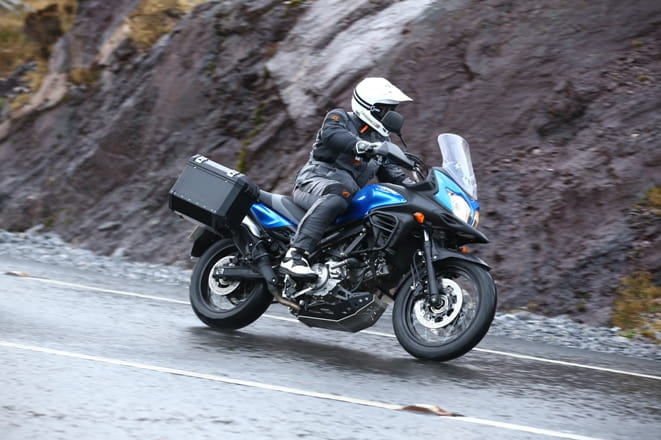 It’s not difficult to understand the appeal of the V-Strom 650 – it’s just so damn agreeable. The thing is it works, it’s not like it’s trying to be something it isn’t, it’s not playing to the hipsters, it’s not even attempting to be super-tech, it’s just a plain old comfortable middleweight with a real nice engine and go-anywhere, any day capability. Only now, with the ‘XT’ variant there’s a little more off-road in its repertoire.

The V-Strom 650 has previously held ‘Suzuki GB’s best-selling bike’ mantle and in Kerry, Western Ireland for the launch of the XT, Steve Hacklett, SGB’s product manager, explained that the V-Strom appeal is far from waning, with the newest V-Strom 650/1000s now picking up 20% of SGBs total sales. Hacklett then acknowledged that the existing V-Stroms are distinctly road-biased so the XT is here to extend the breadth of usability – and yes, offer a little more off-road capability.

So how does it differ from the existing V-Strom 650? Suzuki list the differences as the wire-spoked wheels, alloy sump guard, crash (sorry, ‘accessory’) bars, injection-moulded hand guards and the, er, ‘beak’ that projects under the headlights. Not the longest list of modifications and if we’re honest the only real new – and significant – mods there are the wheels. 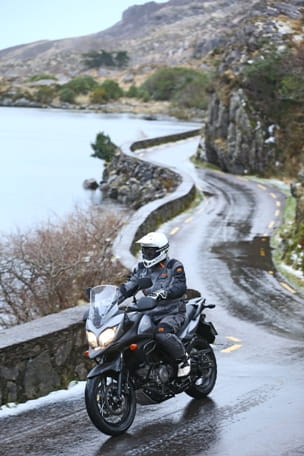 The wheels speak of authenticity, being almost de rigueur when it comes to real adventure bike spec. Cast wheels are just fine, but when it comes to slamming into rocks, deflecting off tree roots, absorbing the percussion of corrugated gravel roads, then you can’t argue with the strength and practicality of a traditional wire-spoked wheel. And, fair play Suzuki, these ones are particularly neat. Made by DID, the spokes lace into the rims via two central raised flanges, so allowing the fitment of tubeless tyres (in this instance Bridgestone Trail Wings). Smartly finished they are too, the anodised black rims offset by the 32 gleaming polished steel spokes with fancy paired lacing – certainly fit for purpose.

The other mods? The alloy sump guard is also an adventure-must, and is vital on a bike like this with its alloy beam frame (very nice too) but no lower frame rails. It’s a three-piece unit but looks substantial enough. As the V-strom has only 175mm of ground clearance it’ll see more work than most, so we should know soon enough if it stands up to the punishment. The ‘accessory’ bars we’ve seen before (within Suzuki’s accessory packs), and given the almost inevitable topple-overs in off-road they are essential kit. The hand guards will deflect rain and small-to-middleweight bugs, but for bigger impacts – even by SGB’s own admission – you’ll be seeking an upgrade. As for the beak, well, that’s at best a tip of the hat to Suzuki’s brief dalliance in the Dakar Rally, back in 1987 when no lesser god than world motocross champion Gaston Rahier competed on a modified Marlboro-backed DR750 (‘Dr Big’ as most know them) – complete with beak.

We didn’t have any cause to exercise Rahier-like off-road skills on this launch, fortunately, but there were still plenty of challenges to turn our ride around the ‘Ring of Kerry’ into something of an adventure. Gale-force winds, snow, hailstones and of course rain meant full winter riding kit and the (optional) heated grips set to max. As the XT’s power output is a fairly modest 68hp there are no fancy electronic aids like traction control or throttle-adjusting modules – because there’s no need. There is, though, ABS, and with snow settling on the frozen narrow roads this was much welcomed. 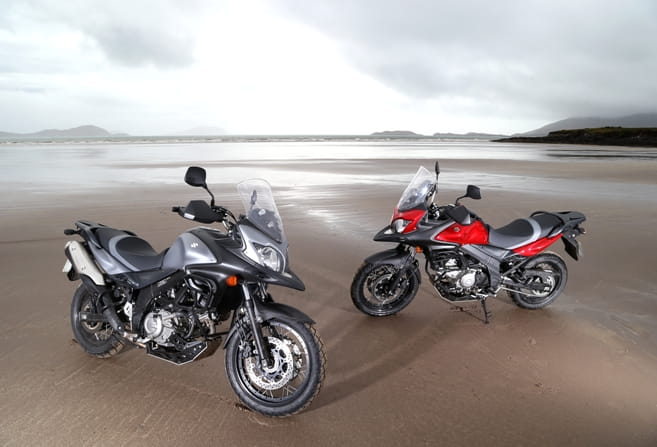 For a bit of off-road fun, a diversion off ‘the ring’ down a narrow track led onto a pebble-and-rock beach and then onto firm sands, whipped by a gale blasting in off the North Atlantic. It was a cruel sea, that was for sure, but on the foreshore the XT was a happy camper, finding an assured path over the stones and rocks, then happily turning skids (power slides) on the firm sand. It doesn’t have the instant kick of a single to lighten the front over obstacles (in common with most larger adventure bikes) but that aside it was a comfortable set-up for standing-riding. If you were to take off-road riding seriously, though, you’d want to spec proper serrated foot pegs and braced handlebars.

Last leg of the ring featured faster roads and here the XT’s versatility again came to the fore. We’ve known this motor since the SV650 of 1999, and we know it’s got a sweet sporty-side that comes into play between 6,000 to 10,000rpm. It can hustle when it wants, quite effortlessly in fact, up to three-figure speeds. Compared to trying to make fast progress on throbby vibrating adventure singles this was easy street for the XT.

It’s also quite comfortable. At 6’0” I’d elected to try the high-seat option and that definitely added to the comfort, improving leg room and adding a nice sit-on feel. Both seats are commendably firm, which should be good for longer runs, albeit I was getting a numb tailbone by the 100-mile mark. The screen does a fair job and is three-way adjustable, only you’ll have to stop and get your allen key out to do that. 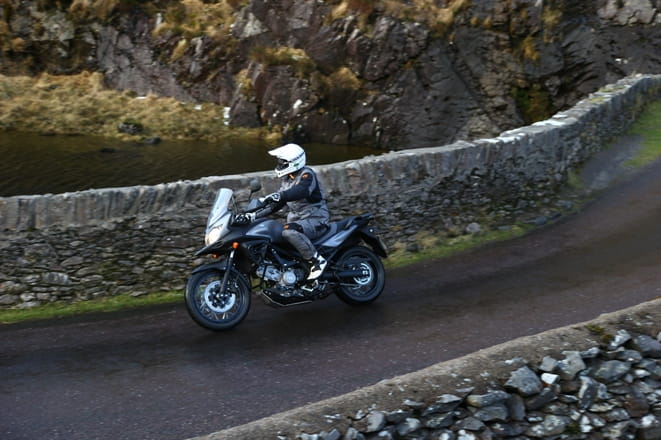 So, in all, the V-Strom 650XT impressed. It’s a competent performer and ultimately does exactly what an adventure bike should – offer you a low-stress platform from which to observe the world. There are bigger, faster adventure bikes but most of the additional benefits they boast are non-essential – more about bragging rights than real-world practicalities. There are also lighter, more agile adventure bikes, but much of adventure isn’t about racing around like a Dakar hero, we’re simply riding un-made roads, not Hawkstone Park. The XT does, then, tread the middle ground. And that’s quite a brave thing to do, for it doesn’t write headlines.

Finally, the price? With top-dog 1200cc adventures asking a heady £15k then at £7499 the XT is value for money. However, that is a fair premium (about £600) over and above the standard V-Strom – and a fair hunk for what is primarily an alternative set of wheels and a bash plate. BMW’s Sertao and Yamaha’s Tenere are probably the closest competition, similar price (£6695 and £6999) with stronger off-road ability (21” front and more ground clearance) but slower, low-spec singles for motive force. The XT does sit pretty near to BMW’s F800GS, too, which starts only a little way north at £8800 – and that’s a pukka tough man’s adventure bike.

There’s a lot of competition out there looking pretty flash. By comparison the V-Strom 650 XT’s virtues are subtle and less easy to define. But study it carefully and you’ll see there’s a lot that’s so very right. It’s a highly intelligent answer to the question of just what an adventure bike should be. A good job, Suzuki. 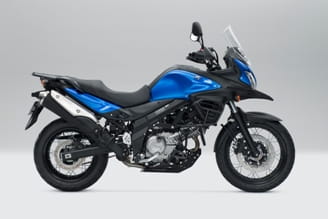 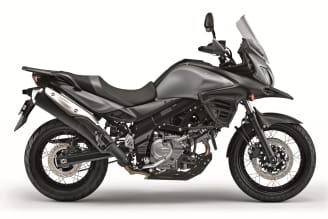 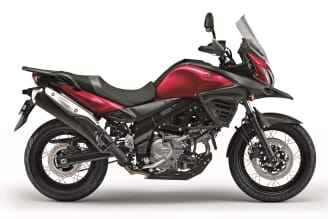 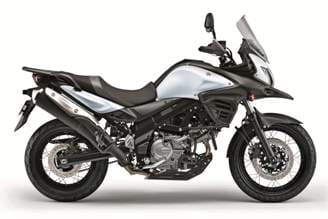 How do you fancy a beefed-up V-Strom?