Beckham: Riding bikes is dangerous, but so is walking down the street! 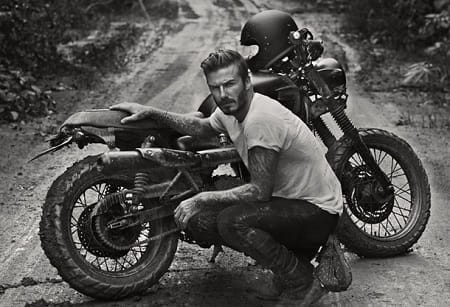 David Beckham has spoken out about his love of bikes in an interview with the Daily Telegraph. The football star talks of how his two-wheeled passion has grown over the years and how he was recently knocked off his bike.

Beckham has long been known as a biker, particularly in the years following his retirement from professional football when he was allowed to ride more. He’s thought to own twelve bikes including a Ducati Desmosedici, Confederate’s F131 Hellcat Combat, his beloved Harley-Davidson Super Vintage ’93 Knucklehead, a Ducati Monster and 1198 SP.

“When I first started riding, I went for a Ducati - it is something that, when you are a young kid, the design of that bike is incredible” Beckham told the Telegraph. “When I got more into the bikes, one of my friends rides an old vintage 1950s chopper in LA and that got me thinking about building a bike.... it took about a year to build a bike, I was going in weekly... and that's what I ride now, a '93 [Harley-Davidson] Knucklehead. All the parts are 1920s, 1940s, and that is the one I got knocked off, so I was sad to see the damage to it. I've got a 1960s Norton as well, but the Knucklehead is my favourite of the range.

"I got hit off my bike recently. It was the first time. Not a great experience, but I was lucky. Riding bikes is dangerous at times, but so is walking down the street. I only suffered a few cuts and bruises.”