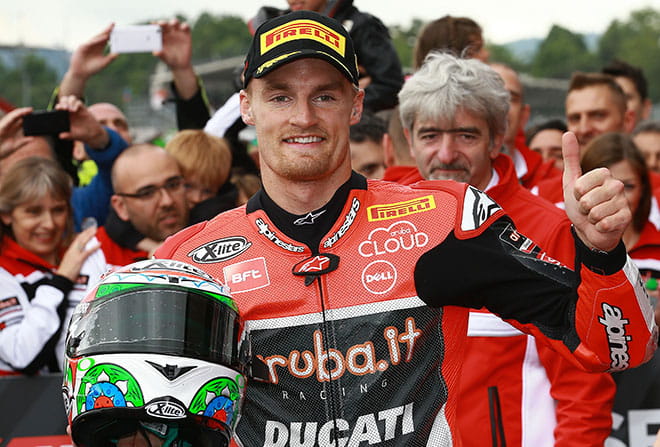 Chaz Davies closed to within 35 points of world champion Jonathan Rea with a dominant display at Imola this weekend.

Starting from pole, the aruba.it Ducati rider was never headed in either race, with championship leader Rea and his Kawasaki Racing Team partner Tom Sykes completing the podium in both Saturday and Sunday’s race.

Welshman Davies pulled away comfortably in both events, with Rea and his Kawasaki making small mistakes in both races as they tried to keep up. After running wide in Saturday’s race, the Ulsterman, who had taken double wins at Imola in the last two season, suffered a scary moment on Sunday as he ran wide onto the astroturf and narrowly avoided being spat off his ZX-10R.

While Ducati’s previously unfancied 1199 Panigale has emerged as a front runner in the hands of Davies, Kawasaki’s latest ZX-10R no longer appears to be the dominant motorcycle. Rea was visibly dejected after Sunday’s race and complained throughout the weekend of a problem with the rear wheel locking. Sykes lost track time on Friday with technical problems and declared himself satisfied with his two third places in the circumstances.

By contrast, Davies was bubbling with excitement after the race, commenting: “That was unreal. We’ve smashed it this weekend. I thought that it would be a really tough weekend for us to be able to keep up with the Kawasakis, given Johnny’s history around here, but it is a real credit to how for the Ducati has come.

“The bike is a complete package now. Before it was there or thereabouts and we could win the odd race but now I can ride it as hard as I want to, wherever we are.”

It was a good weekend for the other British riders too. Imola specialist Leon Camier took the MV Agusta F4 to its best ever results. Sixth on Saturday came despite a small technical problem, with an even more impressive fifth coming in Sunday’s 19-lapper, where he finished one place ahead of fellow former British champion Alex Lowes, matching his best result of the year on the PATA Yamaha. Lowes’ team-mate, the popular Frenchman Sylvain Guintoli, was out of action after knocking himself out and breaking an ankle in a huge highside during qualifying.

Despite his disappointment, Rea maintained his 100% podium record and continues to lead the championship on 221 points, 35 ahead of Davies and 67 ahead of Sykes. Kawasaki also leads the Supersport World Championship after Kenan Sofuoglu took his ZX-6R to victory ahead of MV Agusta’s Jules Cluzel and American Patrick Jacobsen.