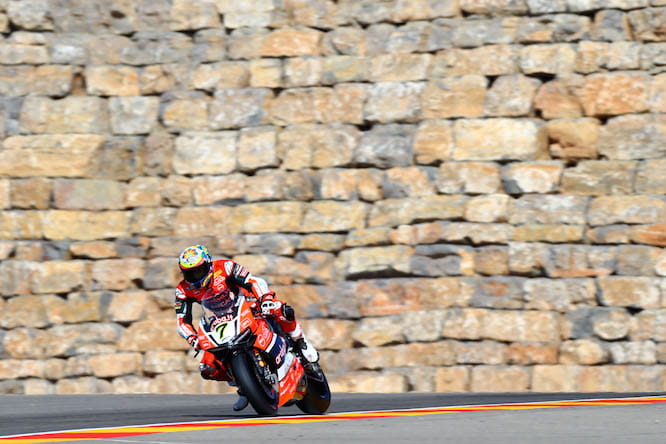 Chaz Davies took his first victory of the season in a dominant fashion at Motorland Aragon this afternoon, obliterating his closest rivals Jonathan Rea and Tom Sykes.

Despite starting from the second row, Davies shot off the line and settled into fifth position before picking off his competitors one by one with ease. By the end of the second lap the Welshman had moved into third and immediately closed the small gap to Tom Sykes and Sylvain Guintoli out front.

Davies took the lead on lap three after passing Sykes and Guintoli in just two corners before checking out of the race to win by four seconds.

Guintoli’s early advantage dissipated as Jonathan Rea came through to challenge team-mate Sykes for second place. Unable to close the gap to the Ducati out front, the Ulsterman instead focused on keeping Sykes at bay.

Jordi Torres took seventh on the Althea BMW, ahead of Alex Lowes who, after a bad start, managed to pip team-mate Guintoli who faded to ninth position. Aprilia’s Lorenzo Savadori rounded out the top ten.

Michael van der Mark was unable to continue his early-season form as he crashed out while fighting Nicky Hayden for sixth place. Nil points for the Dutchman sees Davies overtake him for third in the championship chase. 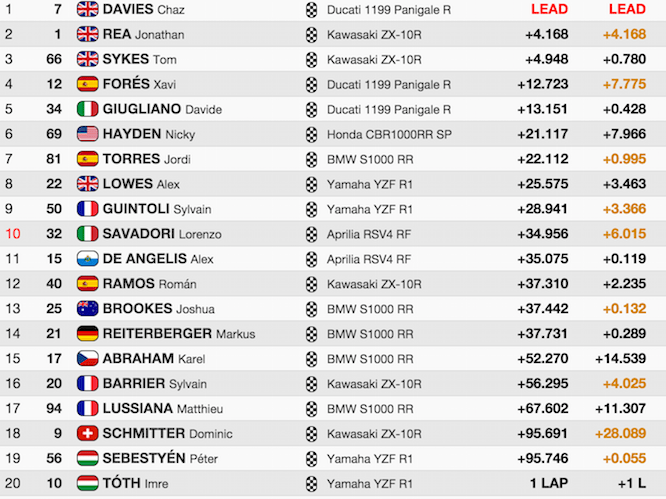