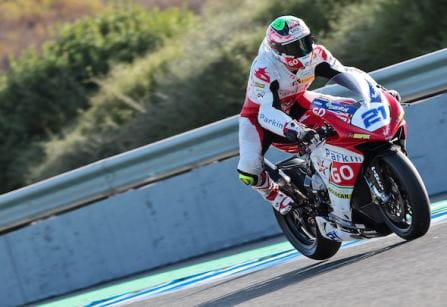 When Christian Iddon stepped up to the World Supersport series last year with MV Agusta both rider and motorcycle were unknown quantities. Iddon was stepping up from the British Supersport series, in which he’d been there or there abouts and MV Agusta was introducing their F3 into the world series for the first time.

Experienced World Championship racer, Roberto Rolfo showed almost right away that the F3 was capable of strong performances, taking a sixth place at Assen and the bike’s first podium with third place at Donington.

Iddon didn’t just have to get his head around a new bike, he was also faced with the challenge of learning the circuits, but that didn’t stop him putting in a good showing in the first half of the season, including a number of strong qualifying performances such as securing second on the grid at Assen.

From around the Silverstone round, where he took a strong fifth place finish things really started to progress. By the penultimate round at Magny Cours, he was fighting for the lead with Sam Lowes and Kenan Sofuoglu who were scrapping for the title. Despite crashing out, a red flag meant he’d secure third place, his debut podium in the series.

Iddon steps up to the World Superbike series this year with Alstare Bimota, who plan to run in the new EVO category with the BMW-powered Bimota BB3.

World Superbikes will very much be split into two championships next year; the EVO bikes may be able to mix with the tail-end of the Superbike class but they shouldn’t be contending for the main championship, leaving a separate title for those in the EVO class to fight for.

Iddon has shown he’s got talent and promise but his results this season will depend on one thing: the bike. The Bimota BB3 is brand new with no proven race record; in fact the Italian marque hasn’t even raced in World Superbikes since 2001.

With the deal generally coming about quite late, the team are already on the back foot with other manufacturers having already undergone extensive testing programmes before flying out to Phillip Island for further testing.

Then there’s the homologation problem. For a manufacturer to participate in the World Superbike championship the bike with must meet certain homologation criteria for the production series, i.e. there needs to be a certain amount of the bikes in production for it to be classed a production motorcycle.

Currently, Bimota hasn’t produced enough BB3s to compete in the opening round at Phillip Island and the FIM isn’t willing to bend the rules, meaning Iddon will miss the first round of the championship. With the way we've seen Bimota operate in the past, we can't see 125 bikes being built any time soon, and a 1000 bikes by the end of the year seems unlikely.

However, the team is run by experienced team boss Francis Batta, so there's no short of experience under his belt.

Missing any race is a dent on a rider’s championship chances and with the bike being brand new, Iddon’s chances of taking the EVO title are realistically quite small.

But as a relatively young and developing rider he has already shown his talent in World Supersport and now knows the circuits. If he can get his head around the bike and the BMW power pays off, there’s no reason he shouldn’t be at the sharp end of the EVO field.

One thing's for sure - he'll definitely be top Brit in the EVO class, as he's the only one!