Sykes giving it everything to take the title 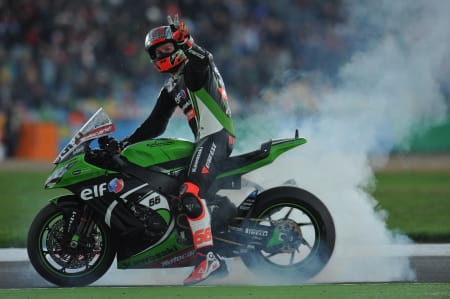 Tom Sykes was battling hard this weekend (6 Oct) at Magny Cours to take two double victories and keep his bid to become the second Yorkshireman to be crowned World Superbike Champion on track. Almost a decade earlier, at the same circuit, Yorkshireman James Toseland took the first of his two World Superbike crowns...

The odds looked to be stacked against Toseland on that October day as his Ducati Fila team-mate, Frenchman Regis Laconi went into the races with a slender four points advantage but those in the know reckoned that would be more than enough, given his local knowledge and the encouragement of his highly partisan fan base.  Toseland was up for the fight. He secured a front row start, third fastest as Troy Corser put the Petronas on pole start.  Laconi a tenth of a second down on his team-mate was on the second row, fifth fastest.

Noriyuki Haga scrapped at the front with Toseland who went on to take a vital third win of the season and with Laconi running third, he tipped the scales towards Yorkshire.  Now all he had to do was finish ahead of the local favourite and Toseland did just that, running second on the road to Haga, but crucially gapping Laconi by an eventual couple of seconds he did the job. Second place in the final race of the 2004 campaign was just champion.

Three years on, same place, same time, well give or take an hour or so, as the start of the first of the two races of a dramatic final round was delayed by the damp foggy conditions.  And when the race started, Toseland, now riding for Ten Kate Honda, had a healthy 29 points advantage at the top of the standings, found himself in early trouble together with one of his key rivals Max Biaggi. Lorenzo Lanzi was at the centre of a first corner tangle in the opener and both Toseland and Biaggi ran wide, over the grass, re-joining at the back of the pack.

Toseland was full of fight. Nobody and nothing was going to stand in his way of regaining the silverware and he carved back into contention, salvaging valuable points as he finished seventh in a race won Haga. That meant his lead still stood at 18 points but in racing nothing can ever be taken for granted and again, the second race was tough, with Haga piling on the pressure, completing a winning double but Toseland had it in control. A top six finish would do the trick.  He crossed the line sixth, almost 20 seconds down on the Japanese rider, but that was just enough.  He was champion, by a margin of two points.

That was a close call, but, years on, to 2012 to be precise, same weekend, same circuit, and more high drama in the final round with Biaggi, the series leader and favourite to  take the crown crashing in the opening race allowing Sykes to  play catch-up as he brought his Kawasaki home in third.  A win in the final race put Sykes in with a great chance of the title, but Biaggi, finishing fifth, as the Yorkshireman won, had done just enough.  Sykes was denied the crown by just half a point.

And that was why last weekend Sykes was taking nothing for granted this weekend at Magny Cours, instead keeping everything on track for the final showdown  later in the month at Jerez.