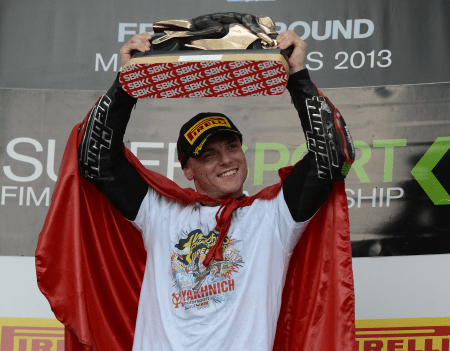 After winning the World Supersport Championship, Sam Lowes began testing with the Speed Up Moto2 team after a short break. In his second outing with the team, he fell fifteen minutes before close of play dislocating his collarbone. Last night, he underwent further surgery to move the pins securing his collarbone in place. We caught up with the World Champion for a quick chat to see how the recovery process is coming along.

“It was quite a bad injury to be honest even if it doesn’t sound too much I had to undergo surgery to get it put back in place with wires placed on top of it to hold it down” explained Lowes.

“I had to have further surgery last night as one of the pins they’d put in had come loose and was poking out into my skin. It was quite uncomfortable so although the shoulder itself doesn’t feel too bad I was getting quite a bit of pain from that so they took that one out and moved the others a bit further in just to give it a bit of support. Hopefully in three weeks I can have them all out which would be great.”

Despite the small problem with the pins, Lowes says the injury is coming along well:

“I feel good, I’ve been training a lot but obviously not directly with the shoulder. I’ve been doing a lot of cardio and just keeping myself in shape.

Hopefully if I can get the pins out around the 6th-8th January then I’ve still got just over four weeks until we start testing so it’s enough time to recover. It feels quite strong at the moment I just hope when the pins are taken out it’s the same. “

“I can’t complain though, we had two and a half days on track and the plan was to finish the test at half past one and I crashed at quarter past. We managed to get through the whole year apart from that fifteen minutes!” 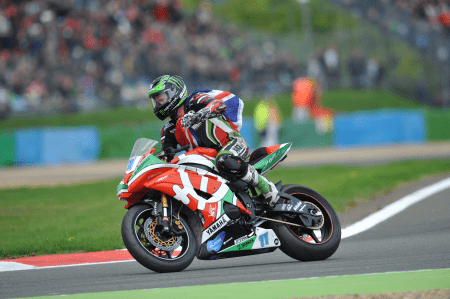 With his injury coming in the Christmas break, Lowes has plenty of time to recover ahead of the winter testing ban lifting in February.

We’ve got the three official tests planned, the testing ban doesn’t lift until February and the first one is the 11th so I’ve got quite a bit of time so I’m hoping to be 100% for then. If we can get these pins out on time and continue with the progression it should be spot on.

Aside from the crash, the test had been going very well for Lowes, who won this year’s World Supersport championship after finishing no lower than second in very race but one.

“The Moto2 bike is awesome; it all went better than I thought it would to be honest. It’s a lovely team, lovely bike. I surprised myself really as it’s all going really well, we’ve got a few more bits to try before the first round in Qatar but the team are happy and I’m loving it.”

It’s a lot different to the Supersport bike in many ways, there are no electronics in Moto2 which is a lot better for me, the bike is a lot lighter and the chassis is a lot more stiff which makes it handle a lot nicer. You can ride it a bit harder than the Supersport which is great.”

The power is about the same but the top speed was higher on the Moto2 bike. It’s different in many areas but all in a positive way, there’s quite a lot it does better than the supersport bike. My lap times at the Jerez test were quite a bit faster than my Supersport times there and we were competitive. It’s just going from one 600 to another, but going from 600 to a racing 600. It’s all good!

As our own Scott Redding showed this year, Moto2 is a competitive series and Lowes is aware just how:

“I’m under no illusion about how tough Moto2 is and I’ve got to learn a lot of tracks but I hope I can be up there. I race to win and I think we can be fighting for podiums, 100%. The main guys next year are probably going to be Terol, Rabat and Luthi and maybe Torres as well.”

“There’s a lot of talent out there but at Jerez it was the first time I’ve ever ridden a Moto2 bike and I felt quite competitive. After the first test we went back and found another 0.4, I don’t want to say too much but I’m really excited for next year.”