Stoner: Production Racer "will be competitive" 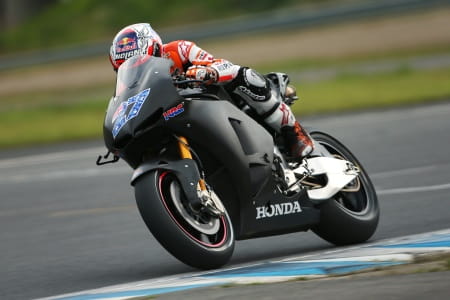 Two time MotoGP champion Casey Stoner has said that the Honda Production Racer, to be known as the RC1000V, will be competitive in 2014. Honda were the first to announce their plans to run a down-tuned version of their GP bike on the spec-ECU.

When Yamaha announced they’d go one step further, by running two 2013 M1s with the spec-ECU fears arose surrounding whether the new RCV had been trumped.

Stoner retired from racing at the end of 2012, however recently made a come-back in a series of tests for HRC. Once again, the weather played havoc with the test schedule with the Aussie not getting any laps in on the first day at Motegi but fortunately managed to get back on track on day two.

Stoner also tested the current RC213V as ridden by Marc Marquez and Dani Pedrosa in the MotoGP championship.

No times were released, although Honda have said Stoner “lapped the circuit with high average speeds worthy of the RC213V”

“The production bike was more impressive than I predicted” said Stoner.

“It had a similar feeling to the RCV but with a little less power and a different feeling in engine braking. With some small modifications I believe this bike will be competitive and I look forward to the next test with it! In general it was a good, but busy day!"

Bike Social’s Scott Redding is the only rider currently confirmed to be riding an RC1000V in the 2014 season with Team Gresini.