Redding: "We got a bit lost with the set up"

A tough race in Brno for Moto2 Championship leader and Bike-Social sponsored Scott Redding saw the Gloucestershire man come home in 8th position in front of an enormous 124,000 strong crowd. 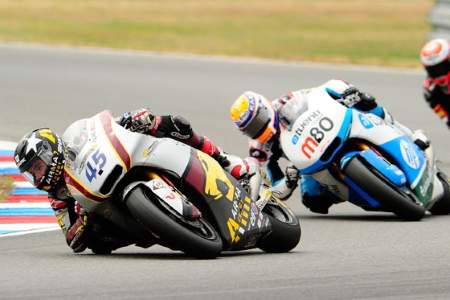 The MarcVDS rider’s lead in the Championship remains relatively healthy at 21 points with 7 rounds to go including a trip to Silverstone for the British Grand Prix and Scott’s home race this weekend.  Bike Social caught up with Redding after the race in the Czech Republic.

Redding struggled all weekend with an inconsistent set-up causing front-end chatter and a lack of rear grip.  No matter how many tweaks the team made during the free practice and qualifying sessions Redding didn’t have the confidence to really push and with a Championship lead to protect he went into the race with a goal of as many points as possible.

He said, "The whole weekend was really tough for us.  Dunlop bought their new tyre but we got a bit lost with the set up.  It was a big learning curve but the tyre’s good over a single lap time and race distance.  We were working hard to solve the problems knowing that points are critical.  Even what we did for the warm up wasn’t ideal so we changed it before race and I had faith in the team and my ability to make it work."

Despite starting the race in 13th position, his worst of the season, Redding began well and picked his way through the pack one-by-one, climbing as high as 5th place and running ahead of Championship rival Pol Espargaro at the half way stage but the chatter that had haunted him throughout the weekend returned.

"The race was good with full tank of fuel, I was passing people, fighting my way through to get to either the front or to Pol but as the fuel dropped it began chattering again and I was losing rear grip under braking," he explained.

Espargaro got ahead and then to add insult to injury, Johan Zarco gave Scott a shove which ran him wide losing valuable momentum in the process.  With the reduced fuel load causing the bike to chatter even more, Scott held on to finish 8th.

After the race Scott said, “I still think sixth was a possibility, but then Zarco slammed into my knee and forced us both off track, which meant we lost contact with the group ahead. I managed to hold on to eighth, which means I lost a little of my advantage over Espargaro in the championship, but I’m happy enough that I limited the loss to just five points.”

The victory in a very close race went to Scott’s team mate Mika Kallio, his first in Moto2.  Takagi Nakagami came home in 2nd with Tom Luthi taking the final podium position.  The top 6 came over the line within 1.6s of each other as the top three all took their turn to lead during the 20-lap Grand Prix.  Despite his struggles, Redding finished only 4.5s behind his race-winning team mate.

Looking ahead to this weekend’s home round at Silverstone, Redding said, “We’ll keep to the plan, always put in 100% dedication.  It will be good to be racing at Silverstone, I love coming back there, I get some mega support”.