Pedrosa the favourite as MotoGP heads to Sachsenring 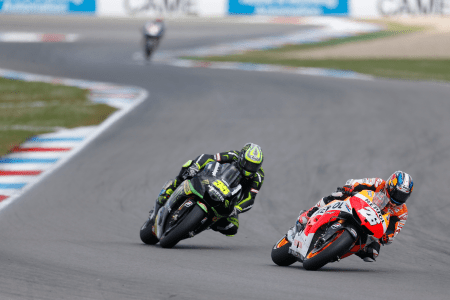 After one of the most interesting races so far this year two weeks ago in Assen, MotoGP heads to the Sachsenring for the eighth round of the 2013 season where championship leader, Dani Pedrosa has a strong record. Pedrosa has won every race at the German circuit in the last three years and has achieved more victories at the track in the last 10 years than any other rider. The Spaniard will be keen to extend his nine-point advantage over compatriot Jorge Lorenzo who is still not 100% fit following breaking his collarbone in Assen. Lorenzo rode to a heroic fifth place just 48 hours after his injury at the Dutch circuit and is confident he can have a good weekend in Germany. However, he has not won in any class at the circuit to date.

Valentino Rossi will be looking to maintain his form after his first win in over two years last time out in the Netherlands. He last won in Germany in 2009; however in 2010 the circuit was also the scene of his famous return just over a month after breaking his leg in Mugello. It looked as though ‘the Doctor’ would finish on the podium until Ducati’s Casey Stoner took him on the final corner of the race.

Marc Marquez also has strong form at the Sachsenring, he took the 125cc win at the circuit in 2010 and Moto2 wins in 2011 and 2012. The German circuit has favoured the Honda RCV in recent years, so Marquez could be in good shape to take his second win of the season. His team mate, Pedrosa has to be the favourite although as Marquez has shown this season, he isn’t afraid to attempt to steal the more experienced Honda man’s limelight.

Stefan Bradl will be looking to take his first ever Grand Prix podium at his home race, the German finished fifth at the circuit last year – his joint-best Grand Prix result at the time. Cal Crutchlow will also be keen to be on the podium at Germany, the Brit becoming somewhat of a regular on the box this season.

In the Moto2 championship, Scott Redding will be looking to maintain his championship lead from Pol Espargaro while in Moto3, Luis Salom and Maverick Vinales will continue their duel with only ten points separating the two.