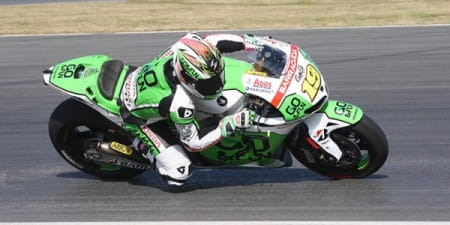 A race at the circuit was originally in the MotoGP calendar for 2013 but was then postponed leaving Dorna, the MotoGP commercial rights owners, to strangely position and presumably pay teams to attend an official test right in between Assen and Sachsenring – two rounds of the Championship separated by 2 weeks and only 700km’s as opposed to the 23,000km round trip to the Southern Hemisphere for Tech3, LCR and Gresini amongst others.

One rider from each satellite team in the Bridgestone-shod premier class attended with Cal Crutchlow for Monster Yamaha Tech3 Team, Stefan Bradl aboard his LCR Honda and Alvaro Bautista with his GO&FUN Honda Gresini.  The Avinitia Blusens’ Kawasaki FTR of Hector Barbera was the only CRT bike whilst in the Moto2 class, Nico Terol and Tito Rabat were testing their Dunlop’s.

The two day test has provided the opportunity for Dorna to announce the return of the Argentina round (the last time was 1999) to the calendar on a three-year deal starting next season.  It also allowed the likes of Bradl, Crutchlow and Bautista to try the 14-corner 4.8km circuit out…and it looks fast!