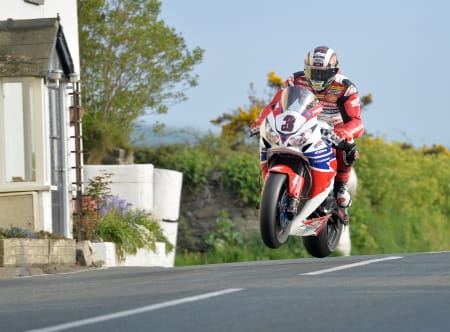 Nineteen-time TT winner, John McGuinness, is this year riding in his 17th TT. Since he started competing on the island in 1996 he has more or less always been a high flyer. This, along with his down to earth personality, is why he is widely regarded as a TT legend. Rather aptly he now rides for the Honda TT Legends team but is still looking for his first 2013 TT win after Michael Dunlop has topped the podium in every race he’s competed in. We caught up with John who told us he’s determined to prove that his career is not on a downhill slope.

Barrie Cooper: Is it a chore signing autographs or do you still enjoy the attention from the fans?
“I don't mind, it can get a bit intense sometimes but I was a kid once queuing for autographs so I like to try and keep the families happy.”

Farrier Ryan Anderson Awcf: When do you know to hang up your leathers?
“I once said to Clive Padgett that if ever I'm wasting petrol tell me to hang my leathers up. It's time to stop when you're not competitive anymore. Currently I've no plans to retire!”

Sam Kirk: Do you think you need to lose some weight to keep up with Michael?
“Absolutely not on a Superbike! Maybe on a 600cc/smaller machine. He's probably not that much lighter. You should have a ‘guess the weight difference’ challenge! Anyway, he's half my age!”

Levi Genders: If you could make your own road race, anywhere in the world, where and why?
“I wouldn't change a thing to how things are now! Although another TT on my home ground in the Lake District would be great.”

Tracey Leigh: My family think you’re amazing, do your family still get worried when you race or have they got used to it?
“I’d imagine they do get worried, more so at the TT. My dad never wanted me to do the TT but he’s ok with it now. My mum watches every start of TT races. It must be traumatic for them but they never show it when they’re supporting me.”

Alex Daine: What keeps you motivated to keep going?
“There's no feeling better in the world than winning! I love so many things including the development of the bike, 24 hours racing, the people I see and meet, and the travelling.”

Babs Chapman: What makes you want to do the TT it looks like one of the scariest events out!?
“I love the challenge; it’s the longest, most dangerous track with fast and slow parts.”

Nigel Hoss Jackson: Where is the best chippy in Morecambe?
“The chippy in Poulton square. I don't know the name of it, but I'm more of a Chinese lover to be honest.”

Adrian Robinson: Do you drink Guinness?
"If I'm in the mood for it or when I’m in Ireland 'to be sure!'. I've recently got a taste for Bombay sapphire!”

Keep up to date with all the latest news, interviews and photos from the TT here on Bike Social.co.uk and on our Facebook page.